A Q&A With Emma Straub, Author of June Indie Next List Top Pick "This Time Tomorrow" 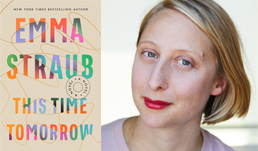 Independent booksellers across the country have chosen Emma Straub’s This Time Tomorrow (Berkley) as their top pick for the June 2022 Indie Next List.

This Time Tomorrow follows Alice waking up the morning after her 40th birthday to her adolescence in 1996. Now, day after day, she is able to time travel back to her 16th birthday where any change she makes alters the future where she hopes her father will not be dying and she has a fulfilling life.

“Time travel and 1990s teen angst and awkwardness with Emma Straub at the helm? Sign me up!” said Javier Ramirez of Exile in Bookville in Chicago, Illinois. “This is the perfect blend of heartbreak and heartfelt laughter that we could all use a dose of right now”.

Here, Bookselling This Week talked about writing the book with Straub.

Bookselling This Week: This story dives into the concept of time through time travel. What was the inspiration behind telling a story this way?

Emma Straub: I started writing this book in the fall of 2020. And, like everyone else, my world was upside down, and suddenly very, very tiny because I was at home with my two kids and my husband, and my father was in the hospital. Basically, everything was terrible. And I wanted to get out. So I found a way out and I found a way back. I never thought that I would write a time travel novel. I was surprised when this was what started happening. But it really became the most pleasurable writing experience of my life.

ES: Alice is not me. And Leonard is not my father. For many reasons that was one of the biggest sort of familial structure changes I made — that I have a mother. My parents have been married for 55 years. I have an older brother. I wanted to tell a story that was really just focused on this one relationship. So I stripped everything else away. Families are complicated and I’ve always loved to write about families and family dynamics, but in this book, I really wanted to distill it to this one central relationship. And so I got rid of everything else. There are many details of their lives that are different from ours. But the relationship I would say is very true to life. That was the relationship that I was thinking about the most while I was writing and it’s an intensely autobiographical book.

BTW: There are delightful pop culture references to other time travel stories and films. Can you discuss more about your process or research of creating this world of time travel for Alice?

ES: I have always tried to keep cultural references out of my novels. Because I think that it dates things. Because references don’t always last. You can’t guarantee that even in 10 years or in 20 years your readers, should you be lucky enough to still have them, will understand that reference to that movie or that band or that movie star. In this book because of the story, because it's about this science fiction novelist and his 40-year-old daughter, I just thought that it would ring false not to include those things. There are a lot of fictional cultural references to Leonard’s letters, books, and the books that his friends write.

I thought that it was actually the most authentic way to approach time travel, because I know that if it were me, if I woke up in 1996 on my 16th birthday, that is what I would do. That would be my sort of catalog of thoughts I would scroll through. I would think, Oh, wait, what is this? Did I get here in a time machine? Is there like a portal? What if I am stuck here forever? How do I get back to it and do something to get back? I think that for a person who grew up in the ’80s and ’90s, which was truly a golden age of time travel media, I think that Alice would do that and so it was really fun. It felt sort of like throwing the windows open to let the rain come inside. It was fun and sort of freeing to let all that stuff pour in because, of course it doesn’t matter if it’s dated, because it didn’t date it like I’ve already dated it. The dating of it is actually crucial to the story so I didn’t think it would be a problem.

BTW: Alice returns to her sixteenth birthday as a time of significance as it comes to being with her father. What time in your life would you return to?

ES: Most years right now, most years before 2020 seem pretty good. I think I would be most interested in not only seeing myself more clearly at an earlier stage in my life, but also really seeing my parents and grandparents as younger people because it’s so funny to think now about how my mother and father were in their mid 30s when they had me which always sounded quite old, and now of course, I know that it’s not. I would love to go back and see them. See them and sort of understand and appreciate them differently.

ES: I think it is completely fair and correct to say that without independent bookstores, I would not have a career as a novelist. I don’t even think I'm exaggerating. I worked at the Book Court, which was my then local bookstore here in Cobble Hill, Brooklyn, in my 20s and I met so many people working there. I met so many writers. I met so many publishers. I met so many editors. I met so many agents. I met so many people who would absolutely change the course of my life. And I made friends with so many booksellers in New York, booksellers across the country. I had a book of stories that was published by a small press, a very, very small press of one person. And because I worked at the Book Court they sold it. And because I was there, we sold almost 1000 copies of it. It was because I worked there and people knew me that I was able to sell my first novel. I had been trying for a decade to publish a novel. Who knows if I would have ever published a novel. I hope I would have, but I certainly don’t know if it wouldn't have happened in the same way if I didn't work at the Book Court.

Fast forward another 10 years and owning and operating Books Are Magic has absolutely changed my life in the publishing and bookselling world again. It has changed me. It has changed me as a person both personally and professionally. It has been the most difficult job I have ever had and the most challenging. I don’t even mean because of the pandemic — that was a challenge that we all faced. But it is really, really challenging to run a small business, and it has enriched my life so dramatically, that I know that my career now would not be what it is without Books Are Magic. I owe everything to independent bookstores without a doubt.

BTW: What are you hoping readers will take away from this novel?

This was the first book that I can really honestly say I never thought about what other people were gonna think of it. I never thought about the reader or my editor or my agent or anybody. I really wrote it for myself. Because it was my therapy that I could do multiple days a week, in addition to my actual therapy, which is horribly only once a week. I hope people enjoy it.