A Q&A With Emily Henry, Author of May Indie Next List Top Pick "Book Lovers" 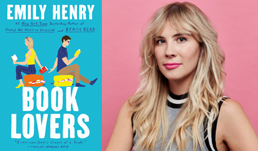 Independent booksellers across the country have chosen Emily Henry’s Book Lovers (Berkley) as their top pick for the May 2022 Indie Next List.

“This book is perfect,” said Michelle Stiles of Magers & Quinn Booksellers in Minneapolis, MN. “I was so happy to see Emily Henry return to enemies-to-lovers. Dare I say it, Book Lovers is even better than Beach Read! The editor vs agent drama, the small-town checklist, and god, the steamy scenes — read this book!”

Here, Bookselling This Week talked about writing the book with Henry.

Bookselling This Week: Where did the idea for Book Lovers come from?

Emily Henry: Book Lovers started with the character of Nora. I’d been watching a lot of made-for-TV Christmas movies, and became fascinated with one of the common side characters that popped up. In the movies about a big-city hot-shot being sent to small-town America (where he inevitably falls in love with a local and gives up his big-city ways), there was often a Girlfriend Back in the City. She was used as a kind of stand-in to remind the main character of not only his corporate goal (e.g. run a local Christmas tree farm out of business, or mass-fire the staff of the toy factory his company has just acquired) but also as a representation of everything that makes his life back in the city unfulfilling.

The City Girlfriend is shallow, materialistic, and doesn’t understand why her boyfriend won’t just finish the one job he’s been sent to middle America to do. It’s rare for this character to get her own happy ending — which makes sense, because you barely see her except for in scenes where she’s on her treadmill, barking into the phone at the main character.

I wanted to explore what would make this kind of character, her origin story in a way, and I also wanted to know what her version of a happy ending would look like. Everything else about Book Lovers was the direct result of that curiosity.

BTW: What is the process of writing a book within a book (i.e., the fictional Once in A Lifetime and Frigid within Book Lovers)?

EH: Oh, gosh. It can be such a nightmare, especially if you’re trying to include excerpts from the book within a book, because you really want those to have their own authorial voice, and that gets complicated. Beach Read also had two “books within a book,” in the form of the stories the two main characters were writing, and those sprung pretty naturally from the characters who were writing them.

Those stories were very much informed by what was happening to the characters who were writing them, because a lot of times, that’s how I write. I use something going on in my real life and pull it apart and lay it over top of something else as a means to explore an event or a feeling more deeply. But with this book, I didn’t want to do the same thing all over again. Instead I tried to capture the vague impressions of these books with select details, so that readers could take those impressions and interpret them.

BTW: Nora’s sister, Libby, crafts a life-changing bucket list for them to complete in Sunshine Falls. What would be on your list if you visited the setting of a favorite book?

EH: I know that London’s Regency era was actually a bad time for just about everyone, but I’m also a sucker for historical romance, so if I could spend a day touring the grounds of Pemberley and attending a nice country ball, I think that could be pretty fun. In general, I think there should be a lot more country balls in modern America.

BTW: What’s something you hope readers take away from this book?

EH: More than anything, I want this book to be a reminder that are a lot of ways to be a person on this planet, and a lot of ways to be happy, and no one choice is innately superior or inferior. So much of Nora’s story is about facing up to this notion of the ideal woman and accepting herself, her needs, and her desires, and not measuring those against anyone else’s. I want readers who’ve never felt quite right to come away feeling seen, validated, and worthy of deep happiness — whatever that may look like to them.

BTW: Since Book Lovers is a book about books (and two beloved bookstores!), how have independent bookstores played a role in your life?

EH: Well, in my career, they’ve played an enormous role. Indie booksellers are hugely responsible for the fact that I have this vast readership. But ever since I was a kid, bookstores have felt vaguely magical, like a miniature version of Disneyland, where there are all these immersive worlds just lined up and you can move between them without even trying. That’s such an amazing feeling.

There was an article a while back trying to figure out why bookstores make people have to go to the bathroom, and it was hilarious seeing how many of my friends were sharing it. I guess it’s common enough that there’s a name — the Mariko Aoki phenomenon — and all these doctors were postulating about why that is, that maybe being faced with that much information and knowledge simultaneously triggers anxiety in our bodies. But it’s a good anxiety! An excitement! Going into an indie bookstore feels a little bit like you’re standing at the intersection of a million other universes, and you can move freely between them. That’s the feeling I wanted to capture in the settings in Book Lovers: the coziness, sure, but also the excitement.