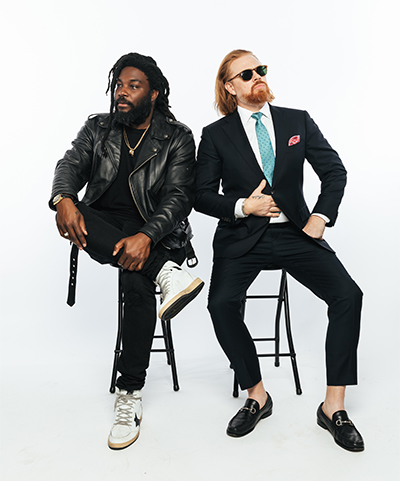 Booksellers across the country chose Ain't Burned All the Bright by Jason Reynolds and Jason Griffin (Atheneum/Caitlyn Dlouhy Books) as their top pick for the January/February 2022 Kids’ Indie Next List.

In three long sentences, best friends Reynolds and Griffin have created a smash-up of art and text for teens that “viscerally captures what it is to be Black. In America. Right Now.”

“If there’s ever been a person to write about our times — Black Lives Matter, conflict, COVID — it’s Jason Reynolds,” said Melissa Fox of Watermark Books & Café in Wichita, Kansas. “Three illustrated poems get to the heart of the matter, make the reader face the truth, and are full of pain and hope.”

Griffin created the artwork for My Name Is Jason. Mine Too, written by Jason Reynolds. He’s an artist and master collaborator, who has shown his art in major cities all over the world. His most recent projects include a commissioned mural for the children’s cancer wing at Montefiore Hospital in the Bronx, as well as a residency at the new contemporary art museum in Amsterdam, Het HEM. He currently creates in Queens, New York.

Here, Bookselling This Week discusses the intersection of writing and art with Reynolds and Griffin.

Bookselling This Week: What made the two of you want to collaborate for this book?

Jason Reynolds: That’s an interesting question, and the tricky part about it is that’s not the way it actually works for us. We’ve always been trying to collaborate. We’ve done a ton of stuff between My Name is Jason. Mine Too (published in 2009) and Ain’t Burned All the Bright, and no one will ever see…whether it’s music, or, I mean, there’s a lot of things lying around my house like pamphlets and little booklets we made back in our 20s. This time, it was just a situation where a conversation we had spun itself into a project. We’ve always just sort of processed our lives as we lived them separately and together. And this is the one moment everyone in the whole wide world is having the same experience — or is having a similar experience, rather, and the two of us couldn’t help but have a discourse about it. In 2020 at that particular moment, we had the feeling of suffocation.

Jason Griffin: Sometimes we choose the subject, and sometimes the subject chooses us. Like J was saying, we talk every week, every ten days or so. And in one of those conversations, I just told J, the thing keeping me afloat right now with COVID are these little sketchbooks, and I draw or write anything in them that comes to mind. It’s a way of processing all the things that were going on. And it was J that said, “Alright, pump the breaks. I have another idea.” And I’m thinking, oh man, we’re struggling to get this one project that we have to do. I don’t know if we can start another one. And J was just like, “Trust me on this. I’m gonna call you back tomorrow because I have to sleep on it and make sure it’s a good idea.” And then he hit me up the next day, and it was about our experience and kind of what we’re going through at that moment.

BTW: What was the experience like? And how did the collaboration process work?

JG: It’s not your traditional kind of illustrator-author relationship. It’s more of a hybrid. Like I said, I’d been keeping sketchbooks in the house, and I was sharing them with him. I sent him a bunch of images and we talked, and he gave me the most beautiful prompt. He started with the writing, and I had some ideas, the look and feel and materials I was working with. And he got back to me and said, “Okay, I wrote three long sentences, we’re calling them breaths, and I’m gonna send them to you one breath at a time.” That prompt was so spectacular. It’s every artist’s dream — take my sentence, and you can cut it up however you want. That enabled me to then go create art with so much freedom.

JR: And I want to add that my background is in poetry. I recognize the constraint that poetry places on a person who wants to collaborate with a poet because you can’t break it, right? You’ve got to be careful about it. So, this book isn’t a poem. It’s three run-on sentences that I removed the punctuation from. That’s what gives him that freedom — if I had presented him stanzas, it becomes a very, very different experience for him to wrestle with. I think that’s important to know. Everyone’s gonna call it a poem. But that’s not what it is.

BTW: If that’s the how, Jason Reynolds, can you talk about the why? Why three long sentences?

JR: Here’s what I thought when I went to sleep that night: For the last 15 years (on the books) I’ve suffered from anxiety. And the thing about anxiety, especially for kids, is when you start to lose yourself, everyone tells you to take deep breaths. This is the thing we all grow up with: take a deep breath. Now, usually, there are only two numbers people talk about with these deep breaths: three and ten. So, I was thinking to myself, if three deep breaths are enough to calm ourselves, to recenter ourselves, I want to create the literary manifestation of what that is.

That was the beginning of my writing process. In 2020, every single thing that was happening to us was attacking our breathing. Whether it be the wildfires in California, the way George Floyd was killed, the tear gas in the streets from the protests, the way COVID affects the respiratory system. We were being strangled by every single bad thing that was happening that year. And I wanted to show that in some sort of nuanced way, and then use that last breath as the equalizing breath.

BTW: Can you both talk about the intersection between visual art and writing? What’s gained by pairing the two?

JG: Joanna Cotler [who published My Name is Jason. Mine Too] influenced the way I think about bookmaking, and in particular, she got me to think about the book as an art object. Some of these concepts that make sense to me now at one time felt abstract — like why the cover image and title of a book don’t always match. [For example,] why is the cover of Malcolm Gladwell’s The Tipping Point a single match instead of a precipice or something like that? And the reason is that a match is a symbol — one match can start a forest fire. When we pair words and images together, it broadens our scope.

JR: And when we’re using art and language, I think what we’re trying to do is create a bigger conversation. In terms of my ideas around language and art — this is a question we’ll get a lot because our industry still has conversations about whether or not graphic novels are real novels. Collaboration is never a bad thing — song and dance, food and wine. In other cultures, pairing art and language isn’t even a big deal. And, when I think about glyphs and cuneiform, I would argue that image with language and image as language predates language as language. Words as language.

BTW: Anything to add?

JG: Can I second that?