Wi15 Presentation: “Stamped: Racism, Antiracism, and You: A Conversation With Ibram X. Kendi and Jason Reynolds”

Bestselling and award-winning authors Dr. Ibram X. Kendi and Jason Reynolds appeared before 2020 Winter Institute attendees on Friday, January 24, in a conversation on racist ideas in America and how to better navigate these complex realities.

The authors collaborated to reimagine Kendi’s Stamped From the Beginning (Bold Type Books) as a narrative that speaks to young people. The resulting book, Stamped: Racism, Antiracism, and You (Little, Brown Books for Young Readers, March 2020), aims to shine a light on the many insidious forms of racism as well as ways readers can identify and stamp out racist thoughts in their own lives. 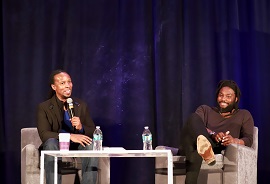 Kendi began the conversation by giving a brief overview of Stamped From the Beginning. The book, he said, is a narrative of anti-Black racist ideas from their origins in the mid-15th century to the present.

“What’s critical about this text is it doesn’t just chronicle racist ideas,” he said. “I also wanted to chronicle those ideas that were challenging racist ideas over time. I didn’t want to name those not-racist ideas, because typically racists at the time were classifying themselves and their ideas as ‘not racist.’ And so, the alternative was anti-racist ideas.”

The book also chronicles the collision between racist and anti-racist ideas, as well as the debate “within or between racists over time.”

The result, Kendi said, was that he ended up chronicling two different kinds of racist ideas: segregationist ideas, and what he’s called assimilationist ideas, both of which he likened to the “nature vs. nurture” debate. Segregationists, he said, have “historically made the case that Black people are inferior by nature, and therefore they’re permanently inferior, while assimilationists have made the case that we’re all created equal, but Black people became inferior on earth, and their inferiority is a result of their environment.”

Historically, Kendi continued, assimilationists have considered themselves to be liberal and progressive because they were arguing against segregationists, who supported incarceration, deportation, segregation, and enslavement. Anti-racists, he noted, are those “expressing anti-racist ideas, or sitting on the margins of society telling both of them that they’re wrong. Black people aren’t inferior by nature or nurture.”

Stamped From the Beginning makes a number of cases, he added, including that while the longstanding belief was that racist ideas led to racist policies, “people producing [racist] ideas were seeking to explain and rationalize the racist inequities of their time, and they were seeking to justify racist policies that typically benefited them.”

After publishing the book, Kendi said he received feedback from many readers who felt teenagers needed to read it. “I always thought they were talking about themselves — that they wished they learned this history when they were 14 years old,” he said. “I was like, we need to figure out a way to make that happen.”

Kendi reached out to Reynolds to see if he would “remix the text for young people,” but, initially, Reynolds refused.

“I was saying no with humility,” Reynolds noted. “I’m not a scholar or an academic or a researcher. I wasn’t a good student...I kept saying no out of respect. I think sometimes we bite off more than we can chew to pay homage out of respect to the person asking us to do the thing, but the truth is you have to know when you’re out of your league.”

But, eventually, he said yes. “There [also] comes a moment when you realize that even your fear and intimidation is small and is shortsighted when thinking about the impact a thing might have,” he said. “This is bigger than me, bigger than you, and I don’t know much, but I do know how to connect to these kids.”

One of the problems with historical texts about ideas, Kendi said, is that they can be dry and inaccessible. “But,” he noted, “they’re so absolutely critical to our everyday conceptual lives and understanding the basis of why we think the way we think, what we believe, and why we believe that.”

While he spent time ensuring that Stamped From the Beginning would be accessible to readers, Kendi still felt he needed someone else to take it to “a whole other level of accessibility.”

Reynolds talked about his writing process for the book by explaining an activity he does with students in classrooms around the country when teachers ask him how to engage students in reading and writing: translation.

“Translation is always a gift when it comes to young people. It’s a way for us to comprehend, and it’s a way for us to embolden ourselves,” Reynolds said, noting that he’ll often do this exercise with a Shakespeare sonnet. “You teach the sonnet straight, then have them translate it from Shakespearian English to standard American English. Then, have them translate it to the language of their neighborhoods, which might not be English for that matter, the language of their homes and communities.”

In the midst of doing that translation, he said, students can comprehend Shakespeare, get some sense of the “rules” of standard American English, and they’re validated by the language that is their mother tongue, or the language that is most comfortable to them, which is connected to their culture.

In adapting Kendi’s work for young people, Reynolds said his goal was to “drop [readers] in the middle of the conversation. Instead of leaving them outside of the fishbowl, we’re going to put them in the water, and then they can see not only is this history there, but this history is here. It’s today. It’s now. And if we don’t learn to talk about it, it will be tomorrow.”

Kendi added that for him, the best history books are rooted in the present, where the reader can learn to apply the past they’re reading about to their own present.

To know a thing, Reynolds said, is not the same as applying it. “To have read history and to have studied history, and to not be able to apply it, or to use it, or to weaponize it for the good is a waste of resources, or intellectual property.”

The authors also discussed the importance of preparing children instead of protecting them from conversations that might make them uncomfortable. Readers who come to this book “will have a lexicon around anti-racism,” Reynolds said. “The reason we’re in the middle of a sex and gender revelation is because of language, not because it’s new. For children, having the language of anti-racism will afford them a sword and shield. Not to cut anybody down, but to be less emotional and more informed so we can grow up having uncomfortable conversations in ways that don’t scare us.”

“With white kids growing up speaking the language of anti-racism,” he added, “and with Black kids growing up understanding that they need not assimilate, all of this can shape the generations to come.”

Reynolds noted that sometimes he’ll talk to teachers who say they aren’t sure what’s “wrong” with a certain student. “Imagine what it would be like for a kid to say, ‘Nothing at all. Nothing is wrong with me. There are things that are happening around me, but nothing is wrong with me intrinsically.’”

And while some parents might be concerned about utilizing this text because they want to protect their kids from conversations about race, Kendi suggested that early exposure to these ideas is actually key.

“The earlier we teach kids about race and racism, the more protected they’re going to be,” he said. “If you are a member of a racial group that has more than another racial group, and you’ve learned that early, you aren’t going to think you are more...If you are a member of a group that has less, and if you don’t grow up believing that your group has less because your group is less, then you’re going to not have to subjected to what I know I was subjected to as a high school student — constantly questioning myself because of the way I consumed notions of anti-Blackness. I’m hoping that this book frees our children from being manipulated by racist ideas.”