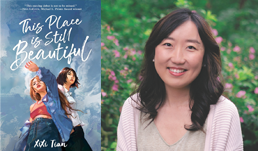 XiXi Tian is the author of This Place is Still Beautiful, a Summer/Fall 2022 Indies Introduce young adult selection.

Tian was born in China and grew up in central Illinois, where she lived most of her life. Tian went to the University of Illinois at Urbana-Champaign and then Harvard Law School, studying practical things, while writing a laundry list of original fiction that never got published and a healthy dose of fan fiction. Now, Tian lives in Brooklyn with her husband and their cat Umberto, who is the primary feature of her Instagram. When not writing, Tian is usually doing the other time-consuming thing that pays her: being a tech lawyer.

Joseline Diaz of Kepler’s Books in Menlo Park, California served on the panel that selected Tian’s debut for Indies Introduce and said of the book, “This Place Is Still Beautiful is one of the most phenomenal debut novels I’ve ever read. After a hate crime is committed in their home, two very different Chinese-American sisters have to navigate how to deal with this incident without tearing their family apart. There is so much packed in this novel and I am in awe of its beauty. I was blown away by this story and you will be too!”

Here, Tian and Diaz discuss This Place is Still Beautiful.

Joseline Diaz: This debut was such a stunning and timely story. With so much hateful rhetoric against the Asian community these past few years, could you tell us a little bit about your inspiration behind the book and what you hoped this book could bring to the Asian community?

XiXi Tian: I started writing this book after the 2016 election. I remember being really lost and just wanting to find some way to write about this feeling that the home that I loved and always considered myself apart of suddenly seeming like it had rejected me. I had recently seen a news article about a family in Minnesota that had their garage vandalized with the word “chinks,” and that gave me the core of the story as a starting point for exploring the emotions and reactions I had from all the times in my life that I had experienced a racist act. In particular, I thought it would be interesting to have the main characters be two sisters, who approached the aftermath in totally opposite directions because in my experience, many of us in the Asian community similarly struggle with how to handle it. There’s a great deal of cultural pressure to just “move on” and not let it affect you, even though that takes a significant emotional toll.

JD: In your author’s note, you said you never wanted to write a book about race issues. Was there a specific moment that made you change your mind and need to tell this story?

XT: I had already begun writing the book at this point, but one major incident that sticks out in my mind was this time my friend and I went to the Belmont Stakes. While we were heading back to the train after the event was over, this woman next to me yelled at someone who she thought was cutting the line and called him a chink in earshot of everyone around. I was so upset and immediately told her off, but no one else in the crowd seemed to support me at all. In that moment, I felt really alone and abandoned, and it pretty much ruined the entire day for me. One of the core themes I wanted to explore was the fact that this woman basically ruined my experience but she would probably never think about that moment again, while I still think about it all the time. It seemed extremely unfair to me that not only did she perpetuate a racist attack, but she also didn’t have to deal with any of the emotional fallout. That day made me especially dedicated to finishing the book and trying to distill that feeling into a story.

JD: As much as this is an important story about race and racism, this is also a story about love, family, and a hometown. Was the setting inspired by your upbringing in central Illinois?

XT: Yes! My family moved to central Illinois when I was three, and I grew up there and went to college around the same area. I’ve lived on the east coast since then, and I was feeling nostalgic for my home. It was important to me to make the setting its own character in the story, especially for Annalie, who considers it a major part of her identity.

In one part of the story, Annalie goes to the windmill farm on the outskirts of the town. There really is a windmill farm outside of my hometown, and we used to go there when I was in high school (not a lot of entertainment back then).

JD: Annalie and Margaret were my favorite sibling relationship I’ve ever read. They felt so real and each of the sisters were so unique and different. They also dealt with the incident at the beginning of the book very differently. Annalie wanted to forget and Margaret was ready for a fight. Is there a character you feel more closely or similar to?

XT: Thank you so much! I’m so glad the relationship resonated with you. I actually do not have a sister, so I love that Annalie and Margaret came off as realistic.

I wrote the two characters as reflective of two parts of myself and how they’re constantly in conflict with one another. On one hand, when something racist happens to me, I sometimes feel like Margaret, where the anger is so close to the surface and has to be voiced. But other times, I feel like Annalie, where speaking up just seems too exhausting, and I would rather just move on from the situation without prolonging it. I wish I could say that I’ve found a balance between the two, but it’s always a struggle and I can’t say I’m entirely satisfied with how I react every time. It’s an ongoing journey.

JD: If you could give Annalie and Margaret (or any teen that finds themselves in a similar situation) one piece of advice, what would you say?

Find out more about the author at xixiwrites.com.