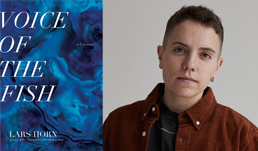 Lars Horn is the author of Voice of the Fish, a Summer/Fall 2022 Indies Introduce adult selection.

Horn is a writer and translator working in literary and experimental non-fiction. Their first book, Voice of the Fish, won the 2020 Graywolf Nonfiction Prize. The recipient of the Tin House Without Borders Residency and a Sewanee Writers’ Conference scholarship, Horn’s writing has appeared or is forthcoming in Granta, the Virginia Quarterly Review, the Kenyon Review, and elsewhere. Initially specialising in Phenomenology and Visual Arts scholarship, they hold MAs from the University of Edinburgh, the École normale supérieure, Paris, and Concordia University, Montreal. They live in Miami with their wife, the writer Jaquira Díaz.

Max Ruthless of Foggy Pine Books in Boone, North Carolina served on the panel that selected Horn’s debut for Indies Introduce. They said of the book, “These lyrical essays struck my soul in the most beautiful way. Horn’s writing is both sumptuous and austere and this pensive text covers a broad range of topics with beauty and grace. Lovers of art who challenge your way of seeing the world will find a happy home in Voice of the Fish.”

Here, Horn and Ruthless discuss Voice of the Fish.

Max Ruthless: This collection of essays is so beautifully written that it made my soul ache. The lyrical style makes every word feel individually crafted and weighted with emotion. Why did you feel that lyrical essays were the right medium for this book?

Lars Horn: When writing, I don’t look much further than the level of the sentence or paragraph. I lose focus otherwise. It often takes me a day or more to craft a paragraph, sometimes to weigh the rhythm or texture of a single line. Owing to this detail-driven way of working, I never made a conscious choice to write Voice of the Fish as lyric essay. At one point, I had a mass of fish and aquatic vignettes, maybe two essays, and not much else. Voice of the Fish only materialised as a cohesive project once I wrote the threaded aquarium essay — a piece sinuous enough to unite the book’s various elements: antiquity, marine life, personal anecdote, prose-poems. The work tends to tell you what it needs, what genre or form — even if uncovering the necessary genre or form takes time and effort. In this sense, Voice of the Fish emerged as lyric essay more than I preconceived of the book as such. All genres and forms can be capacious, but, in the case of Voice of the Fish, lyric essay offered just the breadth that the project needed, the motion and cohesion — to be singular and multiple.

MR: The pervasive themes of this book are water, fish, and mythology which you use as a vehicle to discuss a number of complex topics. What is it about these themes that feel so powerful to you?

LH: The body, as I know it, simply does not exist in most of the works I read. Queer and transmasculine, I rarely, if ever, see myself. As a writer, I seek to produce work that refuses gender binaries, work in which bodies might be more amorphous, less stable somehow — animal, vegetable, mineral; texture or shifting weight. Voice of the Fish asks what it might mean to have an element or another creature bring us nearer to the truth of ourselves. How might water, god or beast complicate the mutations and slippages of our human bodies?

As a child, I believed my body thrummed with fishes. I dreamt of them. I compulsively drew “anatomical” views of my own body — chambers, valves, and holding spaces through which fish slid. As I grew older, as I became increasingly uncomfortable and estranged from my own limbs, I became more disconnected from others, but, most importantly, from feeling human. It is here, in this interplay of self and body, that fish, water, and mythology take on significance in their liminality and crossing of thresholds.

Living as a self and body that are in strange productive tension, I find myself grasping to express and materialise this experience. Water, marine life, and myth are ways that I do see myself — or at least the texture of a self ricocheting within a body. To write of water — vast, slippery, genderless — of animals or mythological bodies that morph. To concern oneself with instances in which the world ruptures — emerges nebulous, unknown. In these liminal, threshold-crossing subjects, I find metaphor and manifestation of my body and self — their tension, peculiar drifting in and out.

MR: Many of the topics in your book are personal in nature. Were there any parts of this book that were particularly difficult to write or that you considered not including?

LH: There’s certainly a filtering process. Every episode in the book came under editorial scrutiny at some point. I try to include personal narrative when it engages wider discussions of art, embodiment, or theology. If it doesn’t, I remove it.

“What Manner of Land” went through vastly different drafts. At one point, the essay centered a discussion of Egyptian medical papyri. I almost didn’t finish it. I am still thankful to an icon of Santa Lucía — a saint whose life eventually worked as a lens for the essay — that started to haunt my sleep when I was housesitting. The icon rested above the kitchen doorway and, after weeks of passing beneath it, I dragged a chair over, lifted the icon and placed it on the desk. From that instant, the essay started to coalesce.

MR: You use historical events, items, people, and texts extensively and for a variety of reasons throughout your book. I found these little tidbits to be fascinating, especially within the contexts you lay them out in. How did you compile these examples to use in your work?

LH: Eels crowned and scattered with meal before a sacrifice. A god of horses whose secret altar lies beneath the hoof-trampled ground of Roman racetrack. Anything that catches my attention I write down. I gravitate toward ancient and religious texts — bodies that transform, that turn animal, petrify, suddenly eclipse. I am also drawn to contemporary artworks, how, in their textural ambiguities, these monolithic forms — rubber, concrete, bronze — offer more relatable expressions of embodiment than strictly human representations.

When working on a book, I keep a notebook, an open Word document, and countless saved email drafts of collected information. Given enough time, I’ve found an anecdote will arrive that obliquely relates to an item of previously found material. These “snippets” accumulate over years. They are my favourite items to curate and write — the world strange and reordered, somehow more mobile, alive.

As for the contextualisation or placement of these vignettes within the body of a project, this arises from a sense that two pieces speak to one another. In Voice of the Fish, “The Conviction of Things Not Seen” describes how Greenland sharks live blind for hundreds of years. It also precedes the essay “Under the Fishes” in which I write of being healed in an unorthodox, inexplicable manner. Both suggest a life lived in darkness, suggest living as faith — in others, in this world to carry, break, and rebuild. Both ask whether there might be ritual, something mystical to the step of our days.

MR: Much of your book deals with the examination of your own personal life experiences or your experience of your own consciousness. Do you feel that your background in phenomenology helped guide you in the writing of this book?

LH: I studied phenomenology because it crystalised beliefs that I already held or, rather, intuited about how I moved in the world. To premise the body, to be led by physicality, by a visual, kinetic thinking. To consider how our bodies — the sensate movement of us — shape who we are, how we do or say or think. Phenomenology certainly provides a vocabulary of physicality — philosophical, academic, worded.

In Voice of the Fish, I interrogate the vocabulary of phenomenology in “Anything That Makes a Mark, Anything That Takes a Mark” — an essay on tattooing my body with phenomenological quotations after I lost the ability to read. The essay considers how — in the wake of this new distance from written language — script might still be accessible, not as linguistic vehicle, but as drawing, as mark-making. In retrospect, I think the driving force of this essay came from a tension I experienced when studying phenomenology. Mixed-media sculpture, installation, or performance art use physical media as subject and mode. Somehow, the academic exploration of physicality — that of the worded page — always seemed less compelling.

Even though I know writing to be physical, visceral, I gravitated toward the exploration of embodiment through art or dance. Reflecting on the exploratory modes of phenomenological study certainly shaped “Anything That Makes a Mark, Anything That Takes a Mark.” However, in their imagistic tactility, the visual arts — photography, sculpture, installation, performance — guided the writing of Voice of the Fish as a whole.

Find out more about the author at larshorn.com.