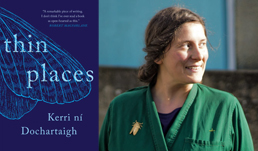 In addition to Thin Places, Ní Dochartaigh has written for The Guardian, the Irish Times, the BBC, Winter Papers, and others. She is from the North West of Ireland but now lives in the middle, in an old railway cottage with her partner and dog.

BJ Hegedus of PostalWorks Silver Lake in Los Angeles, California served on the panel that selected ní Dochartaigh’s debut for Indies Introduce, and said of Thin Places, “Reflective memoir and folkloric tales weave together in this haunting evocative story of a childhood unfolding during the Troubles in Northern Ireland. Prose that reads, at times, more like poetry captures the burning desire to find balance and peace within the heart and soul of an ancient land and its modern inhabitants. Superbly beautiful, raw, heartbreaking writing that takes its place among the stars.”

BJ Hegedus: Thin Places reached down into my soul. The story of your shattering childhood in Northern Ireland woven with threads of ancient tales of the land, the seasons, the people and creatures that exist now as they have done through the ages was such a powerful way in which to share your story. How did you come to this use this format?

Kerri ní Dochartaigh: Thank you for being so kind about this book; for giving it space in your days and in your heart. It is all I always hoped for this book; one that I felt contained such a deep urgency — I only ever wanted for it to touch those who found it. I suppose that is what drove the format, in many ways. It felt imperative to honour the many strands of lives spent in places such as those in which I spent my childhood. To do this I felt I needed to take my own experiences, which in turn are the shared experiences of the land and all who live there — and hold them up to the light. To let them sing their own song; one of healing and of hope. In placing, say, the violence of a given year alongside the swans as they migrate; my grandfather as he shared his truths; the whole achingly beautiful world as it turns — felt like the only way.

BJH: You talk about the thin places in Ireland that viscerally feel as though one could step across into the other world. There are many corners of the world that have ancient mythical histories, yet Ireland is steeped in lore and legend about being able to actually cross into them. Why do you think this is?

KnD: This is such a good question! I think, to be true to my Irish identity and its sometimes-blunt ways: it simply is…The Irish language views there as being no real difference between what many folk might view as “the otherworld” and this one — of blood and bone. Language matters. The way we speak of something creates ripples. If we trust and believe that things are named based on past occurrences; that the seasons, creatures, and wilderness around us holds its own stories in its core — then it is not too huge of a leap to see a hawthorn tree as a portal; to imagine that placing bones in a fire on the eve of St. John’s will protect you; that putting your body in a body of water on a certain day will save you from the sea’s hunger for the year ahead. There is wisdom in the things with which we share this earth; in the language we use to speak of them; in the ways we choose to honour both.

BJH: Thin Places is a story about finding one’s place in the world amongst the chaos. Did you write it as you traveled on your journey or was it written as a compilation after you reflected on all that you had discovered?

KnD: I have kept a daily journal since I was a young child so I suppose I have always marked my experiences down on paper but I never trawl back through these words. Thin Places started life first as a children’s story, then shapeshifted its way through various forms before becoming the book you have read. It was a short poem, a series of political essays, and a piece of mudlarked art in a gallery before becoming what it now is. I wrote the book in its current form in three months, between Derry, Donegal, Cornwall, Scotland, and Barcelona. It was, in many ways, its own journey.

BJH: The way you structure sentences is achingly poetic, one wants to underline word after word. Do you write poetry?

KnD: That means so much to me for you to say that, thanks a million. I write poetry, yes — in fact I am unsure as to whether I view there as being separate, definite boxes in which what we write can live. I write the words in whichever form I feel best suits them; gives the reader the best experience; the most safe and held. In my next book — Cacophony of Bone — I have allowed the words to follow what I hope is an even more poetic path, in some ways; as well as being — in some parts — a lot more structured than Thin Places. This book really declared itself to me for what it was very early into the process. It was my job to honour that.

BJH: What are you currently working on?

KnD: My second book — Cacophony of Bone — will be out in the UK and Ireland next Spring. It maps the circle of a year — a journey from one place to another, field notes of a life — from one winter, to the next. This is a time like no other, but it is also exactly like any other, too. The longest day came, as always it does — and the shortest came, too — in turn. This book is about time, that oddly boned creature; how it shapeshifts, right before our eyes. The pandemic has altered the way many of us view or experience time, and yet we watch as the natural world continues its unfurling, just as it always has, right outside our doors. It is also a book about home, and what that can mean. Home can be a place, a person, or perhaps even nature.

The next book is a telling of a changed life, in a changed world — but it is, too, about all that which does not change. All that which simply keeps on — living and breathing, nesting and dying — in spite of it all. It is, as I said earlier, quite fragmentary in subject and form, fluid of language; this is an ode to a year, a place, and a love, that changed a life. Told month by month, in three parts, through diary extracts, poetry, essay and hybrid prose, its form reflects the time, and the place, that helped to mould it. I hope Cacophony might deliver a little light to any reader that encounters it along the way.