An Indies Introduce Q&A With Judy I. Lin 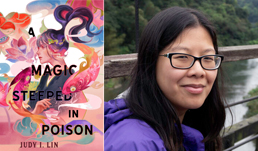 Judy I. Lin is the author of A Magic Steeped in Poison, a Winter/Spring 2022 Indies Introduce young adult selection and March/April 2022 Kids’ Next List pick.

Lin was born in Taiwan and immigrated to Canada with her family at a young age. She grew up with her nose in a book and loved to escape to imaginary worlds. She now works as an occupational therapist, and still spends her nights dreaming up imaginary worlds of her own. She lives on the Canadian prairies with her husband and daughter.

Casey Gerken of Innisfree Bookshop in Meredith, New Hampshire served on the panel that selected Lin’s book for Indies Introduce. Gerken said of the debut, “Full of magic, history and mythology, this book is a quiet climb to the top of the biggest hill on the roller coaster and you can’t wait to get to the other side! Curl up with a warm cup of tea and enjoy the ride.”

Here, Gerken and Lin talk about crafting complex characters and the power of imaginary worlds.

Casey Gerken: The world you built in A Magic Steeped in Poison is so lush and detailed it seems like a world you've lived in for many years with a lore all its own. When did you start building it?

Judy I. Lin: It has always been a dream of mine to write a Chinese inspired fantasy that is based on the wuxia martial arts movies I grew up watching, but there were not many books like it on the shelves when I was growing up. It wasn’t until I read Cindy Pon’s Silver Phoenix in university that I started researching and considering what Chinese dynasty and historical period I was drawn to. But another nine years passed before the idea of basing a fantasy around tea magic was the spark that tied it all together. In a way, the world in A Magic Steeped in Poison has been brewing in the back of my mind for 10+ years!

CG: Your bio says you grew up with your “nose in a book and loved to escape to imaginary worlds.” What was your favorite one?

JIL: I adored fantasy novels when I was younger, and I loved stories about Celtic folklore in particular. The world of faeries always intrigued me, and I read The Hunter’s Moon and The Singing Stone by O.R. Melling many, many times until the covers almost fell off. Those stories involved mysterious strangers, adventures in wild lands, and clever heroines, which are still the type of stories I enjoy today.

CG: Is there a particular story that was passed down in your family that gave you the idea for this novel?

JIL: When my family moved from Taiwan to Canada, I was allowed to bring a set of storybooks of Chinese and Taiwanese mythology and folklore. I liked revisiting those familiar stories and they brought me great comfort while I was still getting accustomed to a new country. I was able to revisit some of those stories while I was working on A Magic Steeped in Poison, but I wanted to play around with those folk tales too. Readers might recognize some of those legends like Grandmother Tiger or the Woodcutter in the Moon.

CG: The end of A Magic Steeped in Poison felt like a ride on a rocket to the beginning of the second part of the story. How much of part two of the duology had been written when you made the decision to stop where you did in part one? Had you already written both parts? (I can't wait for part two, by the way!)

JIL: Thank you! I am excited for readers to discover what happens in book two, and they won’t have to wait long since it comes out in August. I had an outline for the second book in mind while I was finishing the first book, and I was lucky in that while I was drafting A Venom Dark and Sweet, I was able to tweak some details and tighten up a few plot threads in the first book since it was still in the copyediting stage.

CG: The characters are developed so beautifully throughout the book. It seems the format of a duology allowed you to take your time delivering these characters to the reader. One character I need more of is Lian....will we see her again in A Venom Dark and Sweet?

JIL: I definitely enjoyed writing Lian. She was such a delightful character and offered a playful contrast to Ning’s more serious personality. Ning does reunite with her friend in A Venom Dark and Sweet! And we also meet some new characters that I hope readers will have fun getting to know as well.

Find out more about the author at judyilin.com.