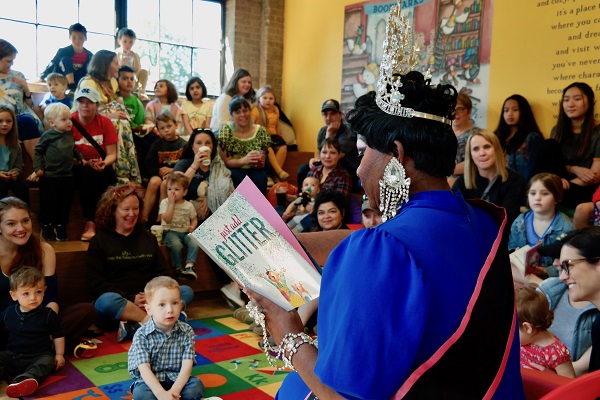 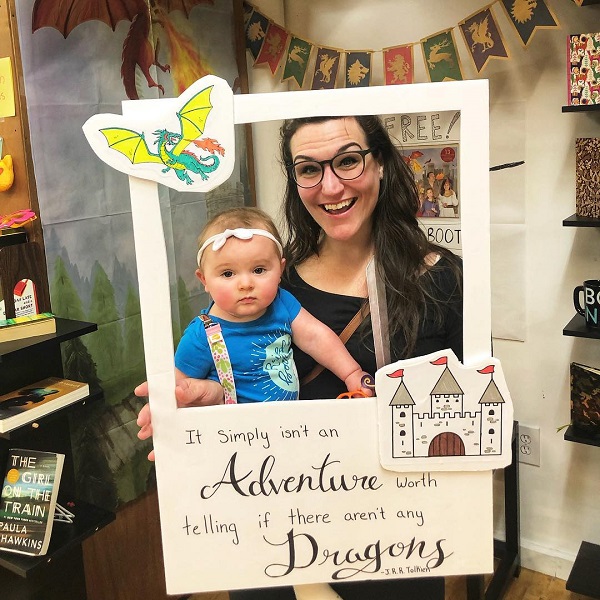 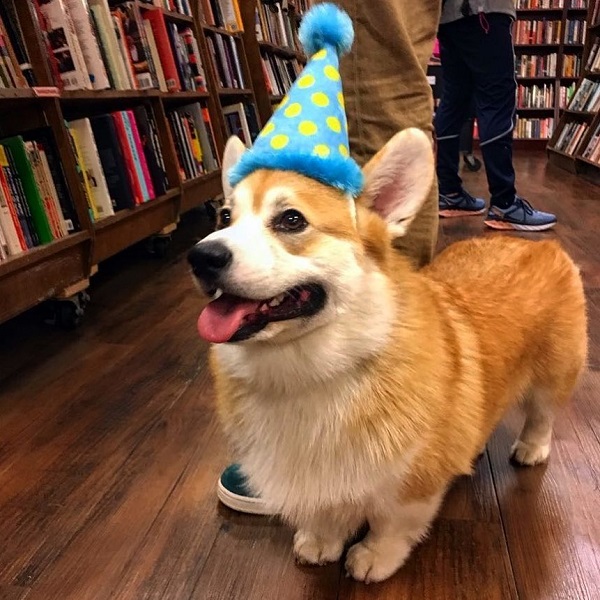 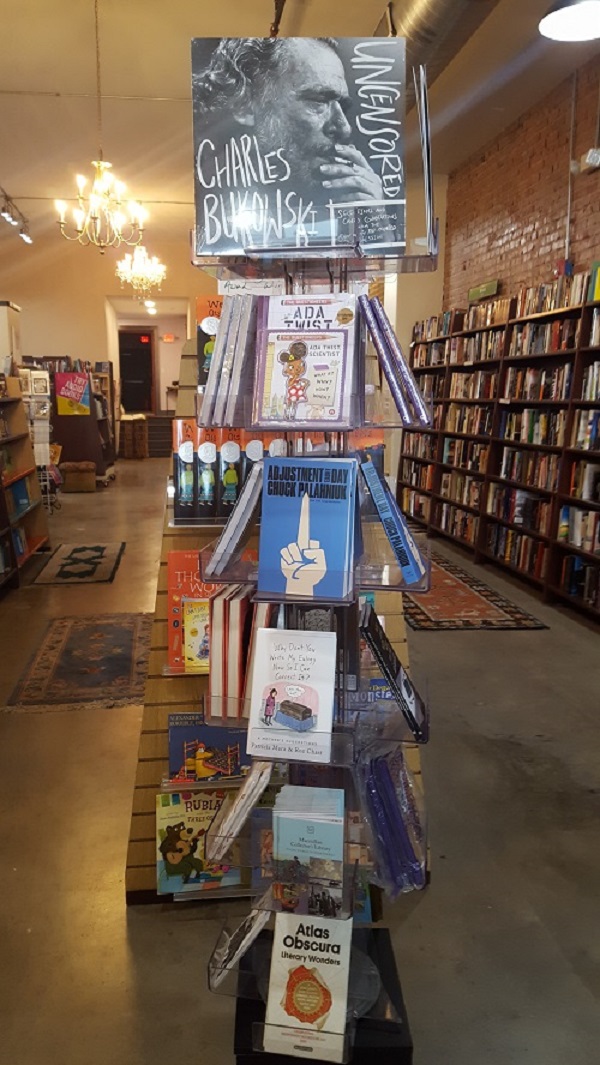 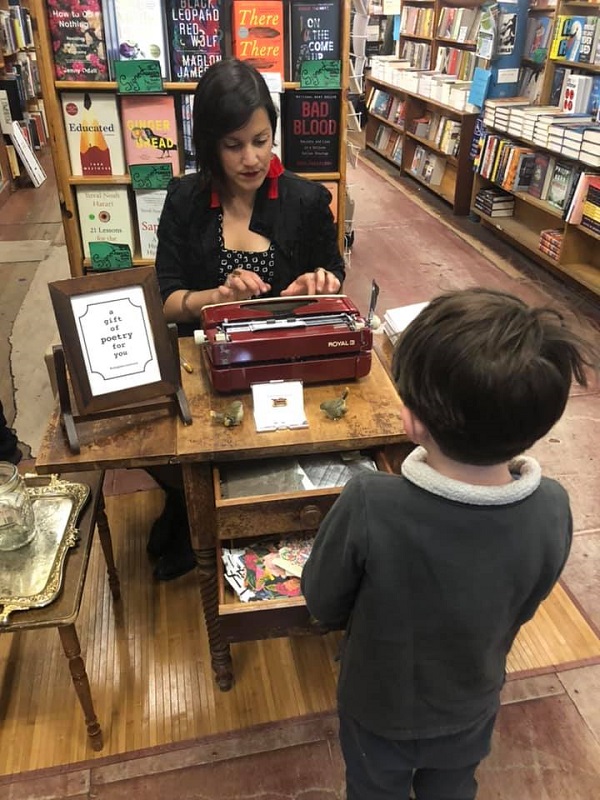 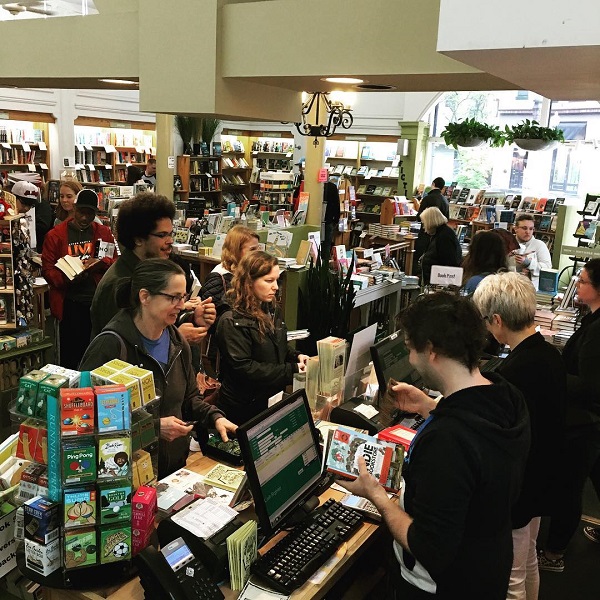 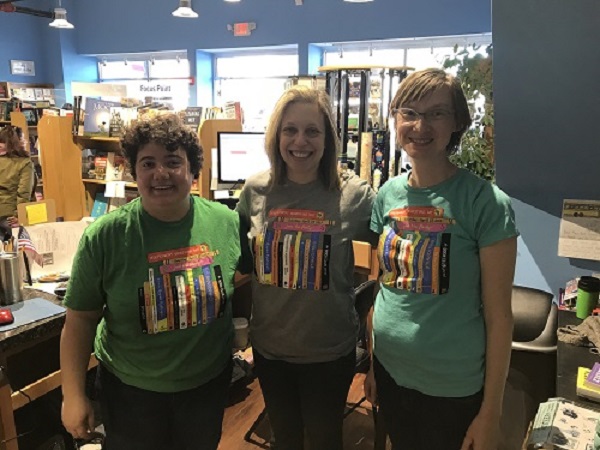 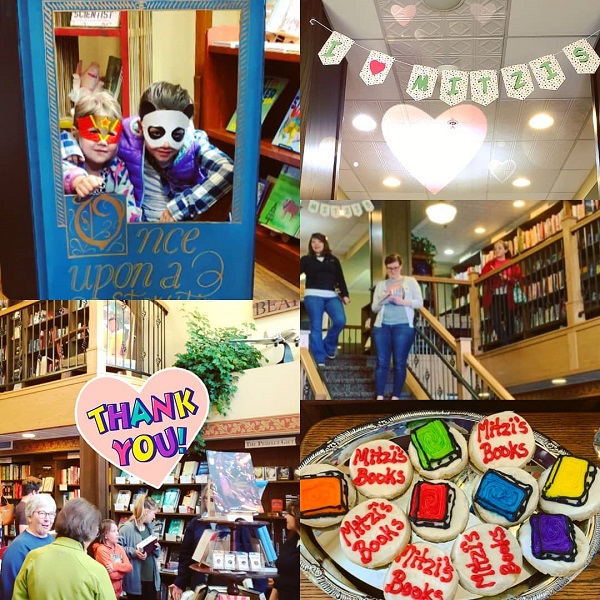 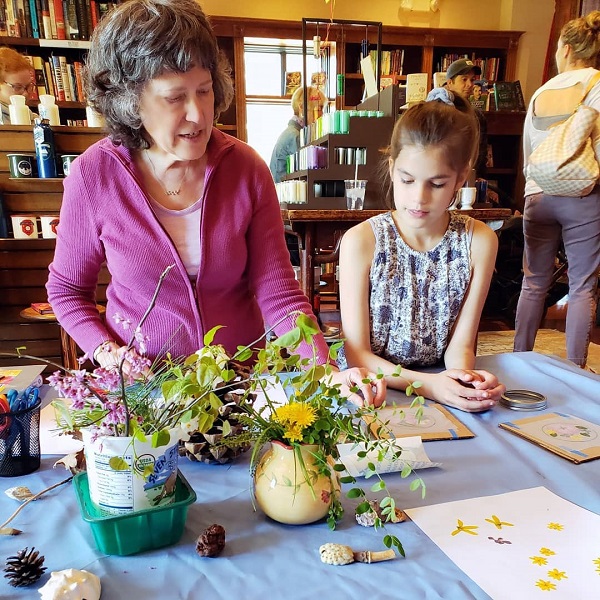 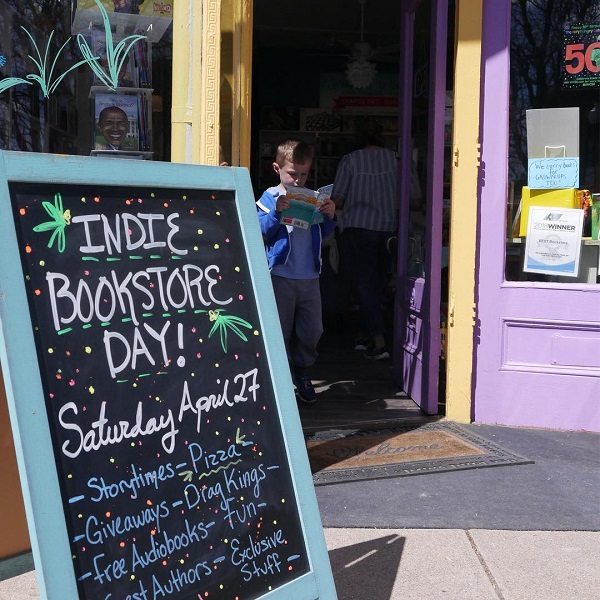 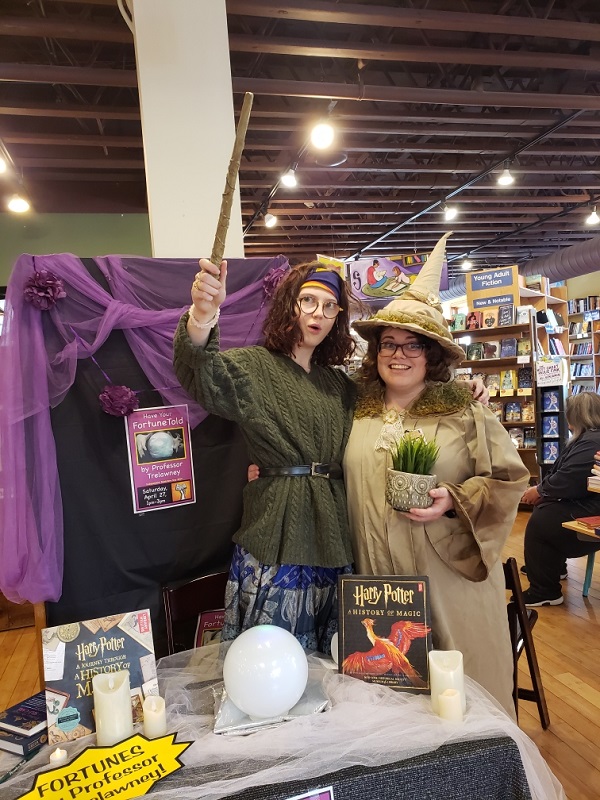 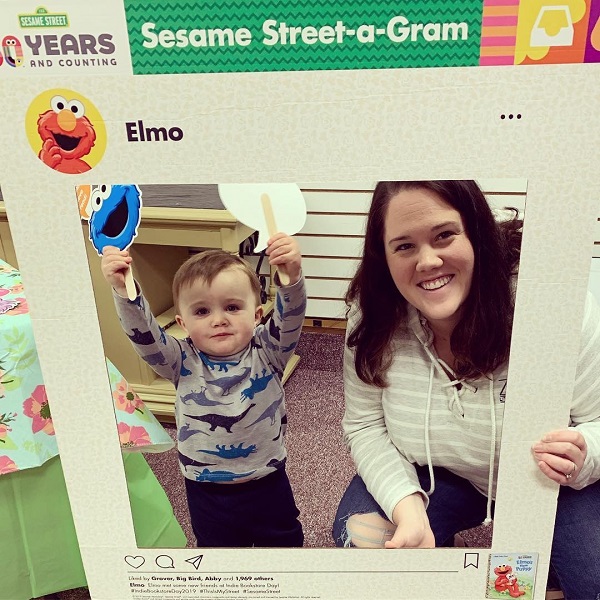 “Independent Bookstore Day has become a really important day on the annual bookstore calendar, and it’s clear from the reports we’ve heard that it continues to grow,” said American Booksellers Association CEO Oren Teicher. “People of all ages enjoyed a host of fun activities in hundreds and hundreds of stores all across the country while meeting authors, fellow readers, friends, and neighbors. Once again, Samantha Schoech, the IBD program director, Calvin Crosby and Ann Seaton of NCIBA, as well as all the NCIBA bookstores that have played such a leadership position in establishing IBD, are all to be congratulated for the resounding success.”

Booksellers around the country offered customers exclusive, literary-themed items for this year’s celebration. Items available for Independent Bookstore Day included a We Should All Be Feminists utility pouch, a signed special edition of Women Talking by Miriam Toews with an exclusive IBD-only cover, an On the Come Up-themed journal, literary tea towels with quotes from Gertrude Stein and Louisa May Alcott, and more.

This was the first time celebrating Independent Bookstore Day for Whimsy on Main in Milbank, South Dakota, though due to inclement weather staff weren’t sure what to expect. “We were nervous about how it would turn out,” said Whimsy’s Amy Thue, “but we had a great day.”

Whimsy on Main doubled an average Saturday of sales for this time of year, Thue told Bookselling This Week. For the event, the store set up a special table with coloring books and stickers in celebration of 50 years of Sesame Street to entertain children while their parents shopped and a ran donation drive to purchase books for local schools.

“I just think it was a great experience,” Thue added, “and as a fairly new, small bookstore, the support that we get from the American Booksellers Association and the industry as a whole really made this a great experience for us. We definitely will participate going forward.”

Jennifer Gillman of the Book Exchange in Marietta, Georgia, told Bookselling This Week that this was the store’s second year participating in the national event and it made twice as much in sales than it usually does on a typical Saturday.

To celebrate IBD, Book Exchange offered discounts and deals on new inventory and used hardcovers, as well as a free canvas tote with qualifying purchases. “Customers loved the bags more than what they purchased,” Gillman joked.

“Independent Bookstore Day for Book Exchange was a phenomenal success. I love the idea of having a day set aside just for independent booksellers,” Gillman added. “It gives our customers a chance to come in and share their love for books the way we love books.”

Cathy Fiebach of Main Point Books in Wayne, Pennsylvania, said the store sold about 150 percent better than a typical Saturday in April, which is about 10 percent over last year’s event.

Feibach also noted that the store experienced a power outage for two hours on the day of the event, but thankfully, sales weren’t impacted. “The quote of the day,” she said, “was, ‘Just lock the doors and leave me in here!’”

“This was our best Independent Bookstore Day yet!” Feibach added. “It generated a lot of excitement. We had some wonderful local authors, food, and giveaways. Even people who hadn't heard about it came in to see what was going on.”

Kelly Evert of Village Books & Paper Dreams, which has locations in Bellingham and Lynden, Washington, said that the stores had a great Independent Bookstore Day, with sales increasing over last year’s event.

“We celebrated bookselling with yummy local snacks, a scavenger hunt, and visits from Professor Trelawney (who told fortunes, of course) and Professor Sprout” of the Harry Potter series, Evert said, adding that KAFE Radio 104.1 broadcasted from the event from 9:00 a.m. to 11:30 a.m.

On the scavenger hunt, bookseller Stephanie Douglas said that “customers went throughout the store to find clues and talk to booksellers about specific things that we offer in the store, such as talking about Libro.fm and going to sections on all three floors that they might not otherwise have discovered.”

“We also have a café, which is under different ownership, on our mezzanine level, so they had a special Independent Bookstore Day drink that they were doing,” Douglas said. “Customers would go and find out what the drink was, so they really got to explore the store in its entirety.”

Evert and Douglas added that Village Books also had a pet photo booth and a “The Bookseller Is In” booth, which were popular among customers. Village Books invited a 20-year veteran bookseller of their store, Joan, who recently retired, for a short shift in the bookseller booth, Douglas said, and a lot of customers were excited to see her back in the store.

Said Evert, “Any reason to celebrate independent bookstores and the people that make bookstores in communities possible is the best celebration!”

Barn Owl Books in Quincy, California, also had a successful Independent Bookstore Day, said owner Kara Rockett-Arsenault, with sales up 98 percent. Barn Owl celebrated with a bookstore scavenger hunt and a bookstore trivia quiz, and customers could also participate in a social media promotion for the chance to win a gift card to the store.

“Independent Bookstore Day, for us, is about getting people in the store who might not otherwise stop in. It’s about making ourselves more visible,” said Rockett-Arsenault. “We run social media promotions with the chance to win prizes, hoping new people will stop in the store, take pictures, and post to a larger audience. Even if we can only get one person in the store that previously shopped online, we are thrilled. IBD is about showing the general public that Indies are not just as good as the big corporations, but better!”

CoffeeTree Books in Morehead, Kentucky, celebrated Independent Bookstore Day for the fifth year in a row with a special Elmo story time, exclusive sales, a literary trivia contest, and a board game night.

Said Rachel Craft, who planned the event for the store, “We enjoyed having our loyal customers celebrate Bookstore Day with us. They look forward to our special activities and we love the smiles on their faces!”

“We had strong support from the community, which was reflected in our sales,” Mullins said. “We celebrated the day as a means of promoting our message that we are a community bookstore, and we still need to make more people aware that we exist. The day served the dual purpose of furthering brand recognition and community awareness.”

This year, Bliss Books & Bindery had book signings and readings; alphabet sales throughout the day, such as the LMNOP hour, when works by authors whose last name started with one of those letters were discounted; and free snacks, donuts, coffee, tea, and cocoa throughout the day.

“We had a great time,” Mullins added, “and we were exhausted by the end of the day.”

“We started off with a Drag Queen Storytime with Miss Pride Winston-Salem and Miss Gay NC USofA, Malayia Chanel Iman, followed by face painting, children’s activities, book recommendations, food trucks, hourly giveaways, and a bookstore scavenger hunt,” said Blackstock. “We felt lots of love from our community, selling a variety of titles and welcoming new and returning customers. The icing on top: author Sarah McCoy stopped by and brought us a Bookstore Day cake!”

The store posted to Facebook: “We lose ourselves in books. We find ourselves there too. Thank you to all of our book lovers, friends, The Poetry Store, Book Arts Roadshow, Sylvie Simmons, Jeremy Kapone, The Barrel Head Brewhouse, family and especially our dynamic staff for making one of a kind experiences at this incredible Independent Bookstore Day!”