After interning at several bookstores, attending BookExpo America, graduating from Paz Booksellers School, and fundraising and planning for a few years, Janet Geddis held the grand opening of her bookstore, Avid Bookshop, in Athens, Georgia, this past weekend. “I just feel so in love with Athens and with the bookselling community at large,” she said.

“To say that the response has been positive doesn’t even begin to cover it,” said Geddis. “At the Friday night party, the place was so packed that there were groups of people on the sidewalk outside each entrance, and it was hard to maneuver through the crowds inside. I feel so lucky.” 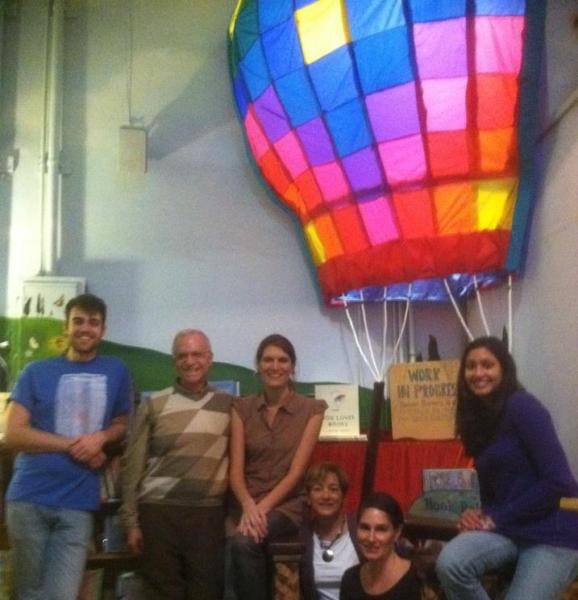 The 800-square-feet store is in a historic building a couple of blocks outside of downtown Athens.  “Avid is small but feels pretty open and airy because of our 14-foot ceilings and huge (I mean huge) historic windows on either side of the shop,” she said. “About 30 percent of the store is dedicated to kids’ books, and the kids’ room is home to the … Book Balloon. So far, we have heard nothing but positive feedback about the shop’s look. I hope that continues!”

Avid’s launch in a bricks-and-mortar location was made possible by myriad contributions from the store’s fan base, which grew steadily from the time Geddis announced her plans to open a bookstore in Athens. “Apart from monetary donations, we got enormous support from our customers by way of online sales, volunteer hours, and more,” she said. “You should’ve seen this place during the build-out phase. So many neighbors signed up to clean, paint, sand, and paint some more. Every day I came into the shop, I’d see a bunch of folks pitching in to help bring this store into existence.  It was incredible.”

Geddis created an IndieGoGo online campaign and competed for a Pepsi Refresh grant. While she didn’t win the grant, she did get a lot of positive attention and reached many supporters. In another fundraising effort, Geddis, who is an amateur photographer, hosted a photo show.

She also received a lot of support from outside of Athens.  “The book world was immensely supportive,” she said, “from publishers who sent free books, to booksellers who allowed me to do internships at their stores, to ABA folks who sent encouraging e-mails all along the way. I feel so lucky to be a part of the bookselling community.” (Geddis had help from booksellers at Bound to Be Read in Atlanta; Books & Books in Florida; WORD and Greenlight Bookstore in Brooklyn; Eagle Eye Books in Decatur, Georgia; Malaprop’s Bookstore/Café in Asheville, North Carolina; and others. “And of course, tons of other people helped — I am wary of listing anyone for fear of leaving someone off the list!”)

To properly celebrate the bookstore that was a part of the neighborhood before it even opened, Avid held a weekend-long grand opening.  At the main event, a party on Friday night, Avid’s friends from the brand-new New Town Revue mixed-genre series presented their inaugural event, with poet Sabrina Orah Mark and musician Madeline Adams.  “At 8:00 p.m., we had a dramatic countdown and, as we reached zero, we plugged in the light that illuminates our Book Balloon, an amazing creation made by a local artist named Krysia Haag.  The next day, we had a kids’ party featuring two story times, the opportunity for parents to take kids’ pictures in the Book Balloon, and a visit from some famous book characters.”

While Geddis, who is the sole owner, was nonstop busy with her new venture, that didn’t dampen her enthusiasm. “I am so appreciative of [everyone’s] encouragement and all that the ABA has done to help me get up and running. I feel I’m finally doing what I was meant to do. I love this job.”