Wi9 Spotlight: Making the Most of Social Media 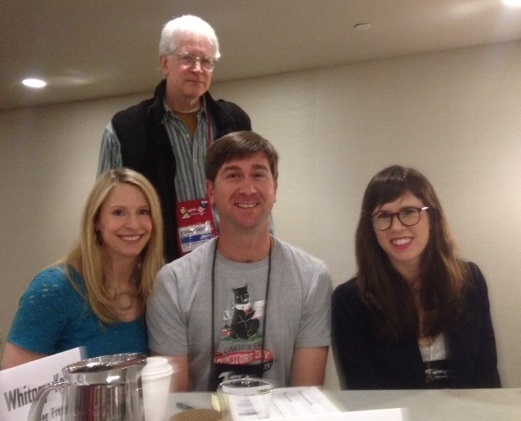 The Winter Institute education session “Making Social Media Work for Your Store” reviewed the social media tools available to indie businesses and gave attendees insight into techniques that have been successful at bookstores.

On the panel were Whitney Keyes, author of Propel: Five Ways to Amp Up Your Marketing and Accelerate Business (Career Press); Pete Mulvihill, co-owner of San Francisco’s Green Apple Books; and Amanda Bullock, director of public programming at Housing Works Bookstore Café in New York City. Each panelist began by providing an overview of what they have found to be most effective.

Keyes, who has a background in retail and did marketing and PR consulting with small businesses before working for Microsoft, said that even big companies struggle with marketing and branding. Since the number of options is often overwhelming, she said, it is important for businesses to focus on strategy, instead of “becoming a lemming” and joining every available site in order to keep up with peers and competitors.

Keys showed the group Socialnomics 3, a short video that “sums up where we are when it comes to social media,” she said.

Mulvihill, who manages Green Apple’s Twitter account, explained that he has empowered a staff member to manage the store’s Facebook account. “I’m a big fan of delegating,” he said, adding that it was important to turn it over to someone who is familiar with both Facebook and the personality of the bookstore.

Mulvihill offered session attendees a few examples in which Green Apple saw a direct financial benefit from being on social media. Shortly before the holidays, through a bookstore he followed on Twitter, Mulvihill learned about the company Litographs, which produces T-shirts, totes, and posters featuring designs based on the texts of classic books. He quickly stocked up on the company’s products and sold about $1,800 worth of merchandise during the holiday season.

Mulvihill also uses social media to gain the attention of publishers. In the case of Allie Brosh’s book, Hyperbole and a Half, Mulvihill knew that there would be an audience among his customers, so he took to Twitter and Facebook to post a plea to host the author at his store. This generated excitement among customers and enough people shared the request that it made an impression with the book’s publisher, Touchstone, and Brosh eventually made a very well-attended appearance at the store.

Green Apple also uses Facebook to seek the opinions of its customers, said Mulvihill. In preparation for the Chinese New Year, the bookstore used Facebook to ask customers for their input on messages for the bookstore’s custom fortune cookies.

While the majority of online interactions might not result in an immediate sale, Mulvihill said, social media is effective at building community. Having an active online presence allows the store to get its name out to the public and to have a personality that extends beyond physical bookstore.

For Housing Works, a nonprofit bookstore with no advertising budget, social media marketing is especially appealing, said Bullock. The store relies on donations for its inventory and has a full schedule of events — two aspects that are regularly communicated to its customers via social media.

Bullock noted that Twitter has a short lifespan, which is important to keep in mind when posting time-sensitive information. Housing Works uses Twitter sporadically before and during events. Tumblr, she said, is a very easy-to-use blogging platform with a visual component that seems to draw a younger audience. Tumblr has a large book community and users post quotes, fan art, and GIFs of books they like. Housing Works’ smallest audience is on Facebook, and it seems to be used primarily by the store’s older customers. The store is also on Foursquare, which acts as great advertising, said Bullock, who is able to run specials through the site.

Housing Works has the most followers on Tumblr, which Bullock credits to the fact that it’s the site she most enjoys using. She encouraged other booksellers to use their favorite sites as well, “because that will be reflected in your content,” she said. “There’s this pressure to be on everything, but you have to know what works best for you and for your store.” Bullock has also experimented with Pinterest but has not found a way to fully incorporate it into the store’s marketing/publicity efforts.

When posting content across platforms, Bullock changes the language slightly depending on the site she’s using. “If someone is following you on a bunch of different sites,” she said, “it might get annoying to see the same post over and over again.”

Though social media can be a great marketing tool, “you don’t want to be too billboard-y,” said Bullock, adding that it’s more beneficial if customers get to know the store on a personal level. In addition to promoting events, Bullock is focused on using social media to build relationships with other stores, authors, and publishers, as well as to grow the online community of book nerds that follows Housing Works, which she has labeled “The Bookternet.”

Don’t be afraid of giving your social media efforts a personality, Bullock said. When it comes to developing that voice, she suggested that booksellers experiment, read other social media accounts to gain insight, and make sure to keep the user in mind at all times.

The panelists agreed that social media has been key in keeping a pulse on their customers, as well as their surrounding communities.

Instead of focusing on the Return on Investment (ROI), Keyes suggested that booksellers think of social media as having a Return on Impact, since its effectiveness should be measured in other ways. “It’s not as tangible, but you’re creating your brand and personality and, ultimately, bringing people into the store,” she said.