Husband-and-wife team Drew and Erin Pineda first thought of opening a bookstore together while they were both serving as active duty U.S. Air Force officers in May 2018. This past June, they hosted 27th Letter’s first pop-up event in Detroit, Michigan, and more recently, the store was named a finalist in this year’s Comerica Hatch Detroit Contest.

When deciding on a name for the store, the Pinedas told Bookselling This Week they were looking for something that evoked a sense of community. 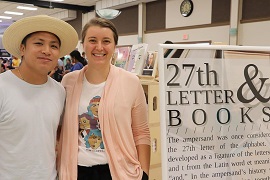 “The history of the 27th letter is that it was the ampersand sign,” said Erin Pineda. “It used to be considered the 27th letter of the alphabet, which is actually something we didn’t know — it was one of those hidden history facts. But when we were trying to figure out a name for the store, we wanted something that really reflected the idea of community and bringing people together. And we like that word ‘and.’”

The ampersand is “a symbol of bringing people together, which we wanted to do for our store,” Drew Pineda added, “but there’s also this element of the evolving and changing nature of language and the progressive element of literature. We thought the ampersand symbol embodied all of those ideas for us.”

The Pinedas told BTW that they met through the U.S. Air Force while they were both in the same basic training squadron. “Early into my Air Force career, I was diagnosed with Non-Hodgkin’s lymphoma,” Drew Pineda said, “and for us, that was kind of a wake-up call. It changes your perspective on life.”

The two, both lifelong book lovers, decided to pursue something that was meaningful and fulfilling to them, Drew Pineda said, noting that he saw writing and the world of books as essential to his healing. He went on to complete an MFA in creative writing at Sierra Nevada College, which he received in August 2018.

When their active duty contracts came up, the Pinedas saw an opportunity to shift their direction and their careers.

That was in May of last year, Erin Pineda said. “After we finished, I transitioned into the Army Reserve and we traveled full-time for about nine months. Through those travels, all these serendipitous things kept happening that were pushing us in the direction of books and opening a bookstore.”

“At one point,” she added, “we were on a hike at the top of a mountain in Washington and we thought, maybe we’re supposed to do this. We took that leap of faith and it’s been really fun.”

While they’re still looking for a permanent storefront in Detroit, the Pinedas currently host regular pop-up events for 27th Letter around the city. The two currently run the bookstore out of their Honda Element; Erin Pineda shared that her father, a carpenter, helped build modular shelving units.

Right now, 27th Letter offers new books for both children and adults, and Erin Pineda added that the store has strong sections for science and nature, creative nonfiction, and poetry.

“The fun thing about having your own bookstore is that you have your own inventory that reflects your interests and things you wish to highlight,” said Drew Pineda. “Every time we set up, we put poetry on the top shelf. It’s prominent so we can spread those voices.”

So far, the Pinedas told BTW, business has been strong. “It’s interesting to see what events have really worked well,” said Erin Pineda, noting that one of their top events was actually the first one the store hosted at a jazz festival in the Jefferson-Chalmers neighborhood of Detroit, the place where the Pinedas would like to open their permanent storefront.

The Jefferson-Chalmers neighborhood is also home to the historic Monticello and to Vanity Ballrooms, and, inspired by the city’s history, one of the concepts for 27th Letter’s permanent location is to have a small audio recording booth in-store.

Moving forward, the Pinedas are most excited to make connections and be a part of the bookselling community in Detroit. Drew Pineda said the community has been receptive to the store, and they have made contact with other literary icons in the city, including Source Booksellers and Pages Bookshop.

And Erin Pineda added that the bookselling community as a whole has also been welcoming. “While we were traveling, we had the chance to interview quite a number of different bookstore owners, and they were all so positive,” she said. “We’re so thankful for that, and the ABA, and the community in Detroit that has welcomed and made a space for us.”