In-Store Displays Are Boosting Sales of Indie Next List Titles

The American Booksellers Association’s Indie Next List is one of the many ways booksellers can recommend titles to their customers. While the printed and downloadable fliers can be handed out in-store and e-mailed directly to customers each month, many booksellers also create physical displays in their store for customers to browse. 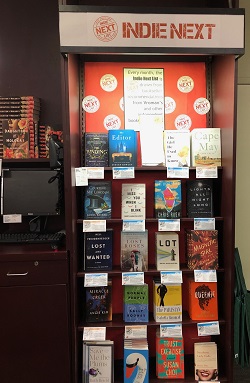 Janet Bibeau, founder of The Storybook Cove in Hanover, Massachusetts, creates displays for both the quarterly Kids’ Indie Next List and the monthly Indie Next List. While the store used to carry only children’s titles, Bibeau told Bookselling This Week that for the past four years the store has been in a larger mall that once had a general bookstore.

The displays allow Storybook Cove to showcase books that might otherwise get lost on the shelves, Bibeau said. The Indie Next List titles, she said, “are not always the books getting the most media attention.”

“They also allow us to say that they are books supported by booksellers across the country if we haven’t read them ourselves,” she added, and it helps Storybook Cove stay selective in its buying, since the store doesn’t have a lot of space for books or the ability to meet and talk with adult book reps often.

Bibeau also suggested that booksellers use the promotional materials provided by ABA, such as the Indie Next List fliers and shelf-talkers. “We have a handful of customers who pick up the flier monthly or seasonally and buy from the list,” Bibeau said, noting that while she tends to see more people buy from the Indie Bestseller displays, she likes to think that exposure from the Indie Next List lands many titles on the bestseller list.

Allison Hill of Vroman’s Bookstore in Pasadena, California, told Bookselling This Week that her store also has a dedicated display for the Indie Next List, which has been in place since the program was first established.

“It’s one of our bestselling displays,” Hill said. “We have customers who come into the store every month to see what’s new, and customers often comment on how much they enjoy seeing picks from some of their other favorite indies around the country.”

Hill said that Vroman’s uses bold signage to make the display stand out. The store also features the branded Indie Next List shelf-talkers next to each book on the display. “It’s one of our bestselling displays,” Hill said. “We really treat it like a permanent section, similar to staff picks.”

“Personally,” she added, “I like that the list reminds us, and customers, that we’re part of a bigger community and that no matter where our stores are located, or how different they may be, we all share a passion for books.”

Booksellers interested in learning more about creating Indie Next List displays in their stores can take a look at Bookselling This Week’s recent coverage of Auntie’s Bookstore.