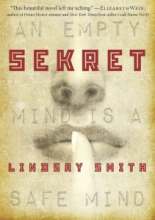 Lindsay Smith is the author of Sekret (Roaring Brook Press). Formerly a resident of Oklahoma, she currently lives in Washington, D.C., where she puts her fascination with international relations, and Russia in particular, to good use as a writer on foreign affairs.

How did MK ULTRA, the Stargate Project, and Nina Kulagina influence Sekret?

Lindsay Smith:  You caught me! I’m a sucker for conspiracy theories and military apocrypha — teleporting battleships and the like. But MK ULTRA — the CIA’s attempt to use LSD for purposes ranging from psychic abilities to truth serum — is even better because it’s completely true. I think the Cold War really brought that sort of bizarre creativity to government projects in a way we haven’t seen since. Nothing was considered too outrageous to attempt, because what if you didn’t try it and the adversary did, and it worked?

Are you a fan of Cold War espionage crime thrillers? Any that you would recommend to YA readers?

L.S.: I’m a huge fan of the Arkady Renko detective series by Martin Cruz Smith (Gorky Park, etc.). It’s so fascinating to watch him struggle between his duty to justice and his duty to the Party. John Le Carre’s George Smiley series is wonderful, as well — the subtle menace in Tinker Tailor Soldier Spy is terrifying! I feel like espionage, especially historical, is underrepresented in YA right now, but I’d love to read more!

L.S.: Make time to write! Not every word has to be perfect from the start. The more you write, the more you’ll get a feel for how to shape your sentences and chapters and books, so don’t be afraid to make mistakes. And read widely, because you never know what will inspire you, or what lessons on craft you can learn.

Did a particular teacher foster your interest in writing?

L.S.: I had two wonderful high school teachers who influenced my writing in different ways. My Russian teacher made me excited about the world beyond Tulsa, Oklahoma, and I’ve been seeking out worlds and eras real and imagined ever since. My English teacher very patiently critiqued the first abominable chapter I brought him of some dreadful 12-book fantasy epic series I was planning. I should probably also thank every other teacher I ever had for not noticing that the “notes” I was avidly taking in their classes were really stories.

L.S.: My grandmother took me to the used bookstore every weekend as soon as I could read, and I’d bring home grocery bags full of Nancy Drews and Babysitters Clubs. And she never made me put them down when I’d read them during dinner!

Why do you think Young Adult fiction is so important?

L.S.: I think the most important message in all good YA — dystopian, historical, magical, contemporary — is that it’s okay. It’s okay to make mistakes and love who you love and fight for what you believe in and learn by doing. You don’t have to perfect and you don’t have to be anyone but yourself; great YA is all about learning just who that person is.

Should we expect a sequel?

L.S.: Yes! Skandal will be out in 2015, and is a direct sequel to Sekret, with many of the same characters, new Cold War conflicts, and new psychic powers! And that’s about all I can tell you about it without spoiling Sekret.

If you were a bookseller, is there a book you would say YA readers just have to read? (Besides your own, of course!)

If you could invite three authors (past or present) to a dinner party, who would they be? What do you think would be the topic of conversation?

L.S.: Tana French and Fyodor Dostoevsky, because they have such interesting interpretations on criminal acts and psychology. Ian Fleming, because — aside from all the awesome espionage business — you just know anyone who can write both James Bond and Chitty Chitty Bang Bang has to be entertaining!

ABA member stores are invited to use this, or any in our series of Q&As with Indies Introduce Debut Authors, in newsletters and social media and in online and in-store promotions (and we’d love to hear if you do).