Bookselling This Week’s occasional series “Spotlight on ABA History” features excerpts from Bookselling in America and the World, an anthology edited by Charles B. Anderson, as well as pertinent summaries from the anthology. 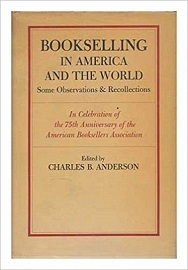 Here, readers will find another excerpt from the chapter “More Than Merchants: Seventy-Five Years of the ABA,” written by Chandler B. Grannis, the editor-in-chief of Publishers Weekly from 1968 to 1971.

This excerpt discusses ABA’s operations during the 1950s and 1960s. Booksellers can read the previous entry in this series here.

The ABA’s 50th anniversary year survey of bookselling costs had elicited reports from only 133 firms, but it was indicative and useful. One thing it showed, Gilbert Goodkind pointed out in the summer of 1951, was that shipping costs averaged 1.9% of bookstore gross sales. The ABA board therefore was happy to thank Doubleday when that company announced in September that it was assuming all transportation charges to bookstores. Already the ABA had some depressing reports at its convention in May. Bookstore mortality was up, Mr. Goodkind reported, and ABA membership had dropped from 1400 stores to 1370 in a year. During the convention, not only had the Supreme Court ruled against interstate fair trade, but the Interstate Commerce Commission has issued a ruling that had the effect of ending the special postal rate for books. Mr. Goodkind reminded members that the ABA had anticipated the postal decision by establishing in 1950 a Consolidated Shipping Service — not unlike the Clearing House of the 1920s. Fortunately in autumn the U.S. Congress restored the book post rate and removed postage rates from ICC jurisdiction. The shipping plan was soon dropped.

Although the American Book Publishers Council had issued in 1951 a committee report thoroughly analyzing book trade problems, ABA leaders felt that publishers had done little about them. Many publishers, on the other hand, thought booksellers were making too many confusing demands. In the autumn of 1951, therefore, the ABA set up a Committee on Economic Aims to draw up minimum, presumably acceptable goals. The committee consisted of Ellsworth R. Young, Phillips’ Book Store, Cambridge, Mass., chairman; Gordon W. Bryant, Lauriat’s, Boston; John A. Reed, Langley’s, Newton Centre, Mass.; and ABA President Allan McMahan, Lehman’s, Ft. Wayne, Indiana.

Gilbert Goodkind was taking a major part in all these efforts and was earning strong respect throughout the industry. It was a grievous blow to all his associates when, on January 20, 1952, he was killed in an automobile accident while on vacation. Allan McMahan rallied the stunned staff to its many tasks, and Mr. Goodkind’s chief aide, Dorothy McKenzie (later Jeltrup), was named acting executive secretary. In the spring Robert Pilpel was engaged as executive secretary, effective June 16, and served until the following March. His successor, as of July 1, 1953, was Joseph A. Duffy, for many years sales manager of successive publishing houses, and in 1950 director of the Ohio Book Project, an ABPC-sponsored, year-long study of a book market. Mr. Duffy’s service to the ABA was to last until his death in 1972, embracing the ABA’s period of most intense activity in its 75 years, and by far its greatest growth.

Two significant steps marked the ABA’s activities as the year 1952 went on. First, the association named its first — and still its only — woman president Marion Bacon, astute manager of the successful Vassar Cooperative Bookstore. Second, at the 1952 convention in Washington, Mr. Young and his committee on Economic Aims made their report.

They stated four goals: (1) full protection — with the store assumed costs if returns became excessive; (2) carriage charges prepaid by the publisher; (3) minimum 2% cash discount; (4) formation of a “permanent and representative bookseller-publisher advisory body.” These proposals were modest enough, in the light of the edge-of-disaster status of booksellers reported by Mr. McMahan at the convention: profits under 1% for “most retail bookstores.” He had two long-range recommendations: development of regional book distribution centers to reduce delays and delivery costs; and establishment of a program to promote the reading habit — an effort to which the ABPC and the new (1954) National Book Committee would soon address themselves.

Some publishers soon complied with one or more of the ABA’s “Economic Aims,” though, after a year, the committee felt progress was still slow. The publishers asked for a list of practices that seemed to the bookstores to cause unnecessary expense. The ABA responded with “A Bill of Particulars” giving detailed recommendations for the “elimination of waste” in six areas: billing procedure; shipping and packages; returns; special orders; transportation costs; jackets and mailings. The ABA and the ABPC’s Book Distribution Committee separately wrote comments and action proposals for each heading, and the full report was given out and discussed during the 1953 Chicago convention.

A year later, convening in Atlantic City, the ABA took up another economic question, the effects of publishers’ subsidiary rights — book club, serial, and paperback rights — upon bookstores. Publishers and booksellers took predictably opposing views, but no one disputed Harold Guinzburg of Viking when he said that the potential markets were far greater than all parts of the industry together were meeting.

In 1955 the ABA attempted a second cost-ratio survey, and enough stores reported to show figures for stores doing under $50,000 annual sales and those doing over $50,000. The smaller firms had stock costs of 61.4%, operating costs of 36.8%, and profit before taxes of 2.4%; for the larger stores, the figures were 64.7%, 31.6%, and 4.3% respectively. For both, average stock turnover was 3.3 times. Few stores, if any, were rolling in wealth. Nevertheless, ABA and Publishers Weekly polls of bookstores showed healthy annual increases in sales — of 10% and 12% — in the late 1950s and early 1960s. In 1959, President Charles B. Anderson of Anderson’s, Larchmont, N.Y., strongly called the membership’s notice to the widening opportunities for booksellers because of growth in population, education, and shopping center development, then in its infancy. New opportunities underlined, he said, the need for greater professionalism in store management.

In 1961, the ABA’s leaders were saying that the economic aims they had sought were largely still to be achieved. In this year, however, the ABA set up for the first time an enduring mechanism for liaison with publishers — its own Goodwill Committee of leading booksellers to call upon individual publishers for informal talks on problems of mutual interest. To encourage and show adequate appreciation to publishers who performed the best all-round service in supplying the stores, the ABA set up the Publisher of the Year Award, and made the first presentation at the 1964 convention. The next year, following the death of John Barnes of Barnes & Noble, a publisher-bookseller, a second award for superior service was introduced and both were presented until 1970, as the John Barnes Awards.

At the 1961 convention some very serious speakers looked into the possible economic and social picture of the 1960s. John Gardner, author of “Excellence” (Harper), later founder of Common Cause, argued that the potential for books lay in the development of a habit of “lifelong learning” among increasing numbers of people. A McGraw-Hill economist foresaw certain market trends which later proved to affect the content of books and the approaches of the people who marketed them: the importance of youth under 30 and the new feminine majority; more leisure time; more consumer spending; more direct mail selling. He did not, of course, foresee the Vietnam War, with its disruptive effects soon to be felt in college and general bookstores in varied and complex ways.

Long-range issues concerned most delegates to the 1961 convention less than practical matters did. Some members complained anew about clubs, paperback supply services, discount outlets’ competition, and the publishers’ mail directly competing with the same publishers’ outlets.

One perennial practical issue — delay in delivery — was examined statistically in 1965 by James M. Kobak, then of the J.K. Lasser accounting firm. While one aspect of his report stressed the need for better cost controls, its most vital point was the growing gap between receipt of an order in a publishing house and the arrival of the books at the store. There were regional variations in these delays, and variations in publishers’ performance, but on the whole, the periods of delivery were to lengthen rather than to shorten during the decade that followed. One major reason for this seemed to be that relatively few publishers had fully mastered the new technology used in order fulfillment.

In 1968 the ABA sponsored an intensive study of the bookstore economics by the accounting firm of Ernst & Ernst. Their report was entitled “Success Factors in Bookselling.” It identified these factors, including financial controls, and indicated that a third of the booksellers examined were “unprofitable” at the time. The following year, Roysce Smith, then of the Yale Co-op, pointed out that even the “successful” shops had “dangerously low” profit margins. To this problem the ABA continued to address its programs by emphasizing methods for stores to improve their own profitability.