Kicking off his self-proclaimed “late-breaking career” as an author, Andy Weinberger, owner of Readers’ Books in Sonoma, California, will release his debut novel, An Old Man’s Game: An Amos Parisman Mystery, in December, the first in a new mystery series to be published by Prospect Park Books. 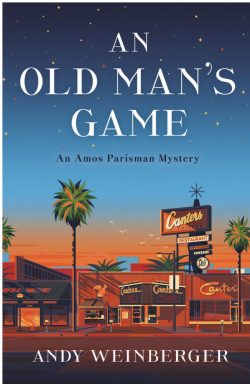 The book, which Weinberger calls “a sort of homage to L.A.,” will be out in paperback on December 3 from the Pasadena-based publisher, which specializes in the L.A. noir genre, as well as L.A. travel books and cookbooks. In this first installment, a rabbi with a controversial theory about the biblical Exodus dies suddenly at Canter’s Deli in Los Angeles, spurring the temple’s board to hire Parisman, a retired private eye and secular Jew, to investigate his death. While the situation appears to be a tragic accident at first, Parisman discovers otherwise, uncovering a well of deception that rattles the local Jewish community.

Weinberger has already secured positive blurbs from Kirkus Reviews, which called An Old Man’s Game “worthy of an encore,” and from several fellow California bookstore owners, including John Evans, owner of DIESEL, A Bookstore, in Brentwood; Terry Gilman, owner of Mysterious Galaxy Bookstore and Creating Conversations in San Diego and Redondo Beach; and Amy Stewart, owner of Eureka Books and author of the bestselling Kopp Sisters series.

Said Stewart, “Andy Weinberger has done something extraordinary with his first novel: he’s written a truly great detective novel that is fresh and original, but already feels like it’s a classic. In the tradition of Walter Mosley, Raymond Chandler, and Sue Grafton, semi-retired private eye Amos Parisman roams LA’s seedy and not-so-seedy neighborhoods in pursuit of justice. I don’t want another Amos Parisman novel — I want a dozen more!”

In 1991, Weinberger, now 72, opened the independent bookstore Readers’ Books with his wife, Lilla Weinberger. Lilla, who died earlier this year, was a political organizer who worked on the campaigns of President Barack Obama and Senator Ed Markey and was often away from the store and their home for weeks and months at a time during campaign season.

After close to 25 years owning and running the successful Readers’ Books together, Weinberger said he decided in 2015 to follow his wife to her next job at the National Foster Youth Institute in Los Angeles, where the two would run Readers’ remotely, driving back once a month to check on the business. Weinberger told BTW he began writing the first Amos Parisman mystery to combat the boredom of the hours he spent waiting in their L.A. apartment for Lilla to return at the end of the day.

“Actually, I owe this all to my wife,” he said. “She had this job where she would go off and I was stuck on the ninth floor of this 12-story apartment building with nothing to do and so I started writing again. I had been writing since I was 12,” but essentially stopped around the time he and Lilla opened the store and began raising their two children.

“What’s interesting to me about this is that this whole thing came out of the blue. I’ve been writing for a long time; I was almost published back in the ’80s. I had an agent and all of that but it didn’t work out. But this time it all happened kind of whimsically and seamlessly. I’m excited about it! Right now I’ve decided that at this point in my life I’m just going to have fun with it. I’m going to ride this pony ’til it drops, and I figure, god willing, I’ve got another 20 years left in me so we’ll see what happens. Maybe I have another 20 novels, who knows?” 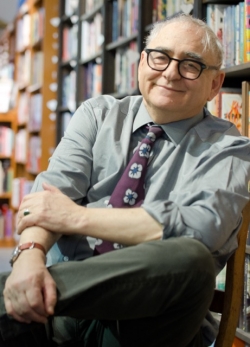 Weinberger told BTW he had been trying to find an agent for the book when he contacted his Consortium rep Lisa Solomon last year; she encouraged him to show his manuscript to Prospect Park, which decided to publish it and signed off on the deal in early 2019.

Weinberger said he plans to begin promoting An Old Man’s Game on November 29, Black Friday, when Readers’ will host the official book launch, which he expects to be very well-attended. He has also already done some pre-sales of the book, he said, and has a few signings set up already.

“I’ve got a lot of book signings lined up in the Bay Area, at Book Passage, Copperfield’s, DIESEL, and we have a few in L.A. my publisher is working on. We already have some nailed down,” he said. “And my friends Gayle Shanks and Bob Sommer, who own Changing Hands in Tempe, have asked me to come to Arizona and do a reading at the Phoenix store.”

Over the next few years, Prospect Park will go on to publish the next three installments in the series, which Weinberger had already completed in the years before selling his book (he is currently working on a prequel). Next in the Amos Parisman series is a mystery featuring a klezmer band, and the book after that concerns the homeless population in L.A., he said.

An Old Man’s Game is a light and funny read; it’s not exactly a “Jewish book” per say, Weinberger said, but it has that vibe. “Parisman is sort of a non-believing Jew who throws out a lot of Yiddish terms and that kind of thing, so there's that kind of interaction,” he said. Weinberger is also currently working out plans for an event at a Jewish forum in Phoenix, and may appear at some temples and other Jewish organizations in the city as well.