A Q&A With Nickolas Butler, Author of March’s #1 Indie Next List Pick

Shotgun Lovesongs by Nickolas Butler (St. Martin’s Thomas Dunne), the top Indie Next List pick for March and a featured title in this spring’s Indies Introduce Debut Authors promotion, is about four men and a woman bound together by their youth in a small Wisconsin town. When they all come together again as adults in town for a wedding, they’re surprised to find how much has changed. Shotgun Lovesongs was described by Bill Carl of Cincinnati’s The Booksellers at Fountain Square as “a spectacular first novel, full of wit, energy, love, and a true feeling of home that other writers strive to achieve but few actually succeed in creating.”

Nickolas Butler was raised in Eau Claire, Wisconsin, and attended the University of Wisconsin-Madison and the University of Iowa Writer’s Workshop. His work has appeared in Ploughshares, the Christian Science Monitor, the Kenyon Review Online, Narrative, and the Progressive.

Butler recently spoke to Bookselling this Week about his debut novel.

Bookselling This Week: Shotgun Lovesongs focuses on the idea or concept of coming home, and whether or not that is possible — what was your inspiration for this story? Why do you think it has resonated with so many people? 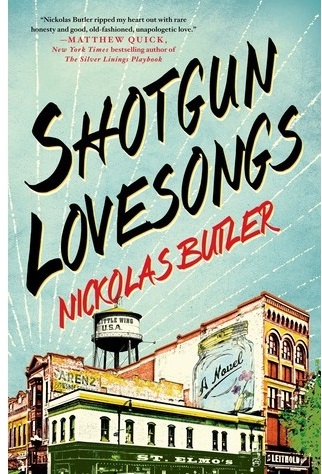 Nickolas Butler: Well, I should say, I actually didn’t start with an idea or concept. I basically started with an emotion, or a few emotions, which were homesickness, loneliness, wanting to find a way to get back to my own hometown, and wanting to write about my hometown, so I guess that’s the way I think about it. It wasn’t really about the concept, but more about that emotional space for me.

I don’t know why it’s resonating, but I’m really thankful that it is, of course. It’s so difficult once you a release book out into the world. You have no idea what’s going to happen or how people are going to interpret things.

BTW: Was your own hometown the inspiration for the novel’s setting of Little Wing, Wisconsin?

NB: It’s about a much smaller town than Eau Claire. I can’t really point to one place on the map. It’s really an amalgam of small towns I’ve visited.

BTW: In Little Wing, you captured the comfort and familiarity of small-town life. How were you able to make such a specific part of America feel so universal?

I think it really just goes back to the emotions. There are certain notions I’m interested in writing about, like love or friendship or decency, and because the characters themselves are interested in those things, I think — I hope — that’s what people are responding to. I wouldn’t say universal, that sounds grandiose for me to say, but if it’s resounding on a grander scale, I think it’s because people generally are interested in those ideas, wherever they’re from.

BTW: In his nomination of Shotgun Lovesongs for the Indie Next List, Bill Carl compared your writing to the likes of Richard Russo, Jonathan Tropper, and Larry McMurtry. What was your reaction to this comparison? What was your process for writing from four different male perspectives?

Those compliments are overwhelming. I’m very grateful for a compliment like that. It makes me want to buy that bookseller a beer or a bottle of whiskey or something.

I don’t actually prefer books with revolving first-person narratives. I didn’t set out to write a book with that kind of structure. To me, the first chapter introduces everyone in their best light. You can’t have a book where that kind of emotional pitch is sustained; I don’t think a reader would believe that. Once I realized I had to go deeper into these people’s lives, friendships, and marriages, the only way I could see doing that in a deep, compassionate way was to give them their own voices.

I thought Ronny in particular would sound different because he’s been damaged physically. He’s traveled more than the other guys, and spent time in the American West, so I could kind of hear his voice a little differently. Kip is the closest thing to a villain, and I knew that that wasn’t fair to him. Even real-life villains have an explanation for why they are the way there are, and so then it was just a matter of getting deeper into that.

BTW: Between the Indie Next List nomination, and being a part of the Indies Introduce promotion, Shotgun Lovesongs has been getting a lot of attention from independent booksellers. What does their support mean to you?

NB: I’m wildly grateful for all the support I’ve had from independent booksellers from the very beginning, when the first advanced readers’ copies went out. They’re my heroes. It’s a tough time, but they’re so passionate about what they do. I know how difficult their jobs are, and they really are inspiring to me. It’s so refreshing to spend time with them and just geek out about books and writers.

BTW: In a more general sense, what has the experience of publishing your first novel been like?

NB: The easiest, most clichéd answer that I can provide for you is that it has been a dream come true. The more complicated follow-up to that is that I woke up after the book had been sold and I couldn’t believe that I was waking up inside my dream. That these things were possible, that people were reading my book — even that is jarring, because you spend so much time alone writing this thing, you don’t know whether it’s even any good.

St. Martin’s Thomas Dunne was really spectacular about sending me out to meet independent booksellers months before the book came out, and that was just extremely informative and compelling for me to be in these stores, to see people handselling books they’re really passionate about, talking about what classics people read. Other than a really good restaurant or a really good café, a bookstore is my favorite place to be. To have this experience of being able to travel around and meet booksellers is, again, another part of this dream.

BTW: You have a forthcoming short story collection, The Chainsaw Soiree. Should readers expect similar themes to those presented in Shotgun Lovesongs?

NB: I think that generally speaking, the answer is yes. I think it’s a little darker than Shotgun Lovesongs. There are some pretty bleak stories in the collection, but it also embraces the physical environment more specifically than the novel does, environmental concerns that I have, and maybe even some class issues. The stories might be just a little more dark and political than the novel.

BTW: And are you working on anything else?

NB: I’m working on a lot of different stuff. I’ve written some plays. I have no idea what to do with them, but I’ve written them. I’m always working on poems and short stories. I have a new novel idea, but I’m really just taking it slow. I want it to be right and not rushed.

I’m also fielding a lot of questions these days, which is a little bit of a different reality for me, too, in a good way.