People Get Ready, a neighborhood bookspace focused on community and advocacy work in New Haven, Connecticut, is what owners Delores Williams and Lauren Anderson are calling a “project-in-progress.” The store, which is currently open for limited hours on Sundays, will continue to open and expand over the course of the next year.

Williams told Bookselling This Week that the idea for People Get Ready “budded out of a friendship that developed between Lauren and I. We both loved poetry and really loved to read, and we believe in the joy of learning for children.” 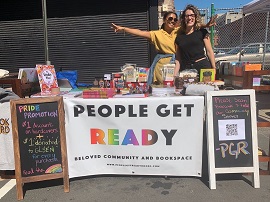 People Get Ready curated a selection of books for a Pride event in New Havent.

The two first met through public education advocacy work they were doing in New Haven, where they both live, and noted they both saw a need for a space focused on books and reading across a range of ages.

Williams, who grew up in New Haven, noted that her background is in psychology, and that she’s also a licensed realtor, a job she began in New York. Recently, she returned to New Haven to care for her father.

In coming back to her hometown, she said, she realized that through her work in public school advocacy, and as a public school student parent, she wanted to do something “genuine and authentic” in the community.

In terms of real estate, she added, it’s abundantly clear that the value of property is dictated by the value of the surrounding schools. “Investing in education is something I really believe in,” she said. “Not just as a parent, but as a city resident and businessperson in general.”

Anderson noted that she comes from an education background. She worked as an elementary school teacher, and is now a college professor, teaching classes on literacy, educating children, and children’s books and culture.

“I also have some experience working as a bookseller in a bookstore because that was something I wanted to have under my belt,” she said. “But my own background is much more around teaching and literacy and, in particular, curriculum development and social justice.”

She added that while the store is currently only open for a limited amount of hours each week, it has hosted a number of “pop-open” events that coincide and engage with certain holidays and heritage months.

So far, People Get Ready has partnered with New Haven Pride and the Connecticut chapter of GLSEN to provide a curated selection of LGBTQ+ texts. On Columbus Day, it hosted an event called “People Get Ready to Teach the Truth,” and the store was open for the entirety of the weekend and featured a selection of books by Indigenous authors.

In the coming months, the store also plans to host an event called “People Get Ready to Celebrate Black Lives and Radical Love.” Taking place across two weekends in advance of Black History Month, Valentine’s Day, and Women’s History Month, the event will feature a wide range of books by black women, especially.

The store’s current hours and when it hosts events are also purposeful in another way, Anderson added, because they coincide with times that the public schools and libraries are usually closed. By having the store open during these times, Williams and Anderson are providing their community with an alternative educational space.

Right now, Williams and Anderson are focusing on creating a curated selection of books that challenge some of the patterns they know exist in publishing and bookselling.

“We’re looking to provide books by underrepresented authors, including people of color, Indigenous authors, LGBTQ+ authors, and bilingual authors,” Anderson said, noting that the store will also be involving its community in the shelf-talker creation process. “We’d like to have them written from the perspective of members of those groups and the local community.”

Additionally, Williams told BTW that the store will be focused on having relevant conversations that pertain to issues in the community.

“I’m looking forward to seeing how this grows and how it will impact our neighborhood and city,” she said. “I’m hoping that it grows into a staple and that people continue to feel comfortable and that it’s a safe space. We’re also planning to have more programming and a cafe component, but that’s way into the future.”

“Being responsive to our community,” Anderson noted, “has been a part of our plan from the beginning — we’re excited for all the opportunities to grow and expand, but we want to do it in an authentic, community-centered way.”