North Carolina Booksellers on H.B. 2: “All Are Welcome Here”

In a special session on March 23, North Carolina’s legislature passed the controversial House Bill 2, which, among other clauses, requires certain public bathrooms and changing facilities to be designated for use by males or females based on their biological sex, as stated on their birth certificate. The bill also prevents the establishment of and overrules any local ordinances counter to the law.

In response, independent booksellers throughout the state are speaking out against the bill, characterizing it as discriminatory and pointing out its adverse effect on businesses in the state. In addition, indie bookstores are providing forums for discussion about inclusion and equality, and ensuring their stores are seen as places where all customers are safe and welcome.

“As a business owner, and especially as a bookseller, I spend a lot of time thinking about how to encourage people to come to my retail space and how to make them feel comfortable in that space,” said Jamie Fiocco, owner of Flyleaf Books in Chapel Hill.

A week before H.B. 2 passed, Fiocco spoke at a rally held by Equality NC, which is calling for a repeal of the bill. The rally demonstrated support for a new antidiscrimination ordinance passed by the city of Charlotte, a move that proved to be the impetus for the special session of the state legislature that passed H.B. 2. The Charlotte city ordinance would have allowed transgender people, as of April 1, to use restrooms in accordance with their gender identity, but House Bill 2 ultimately superseded the policy. 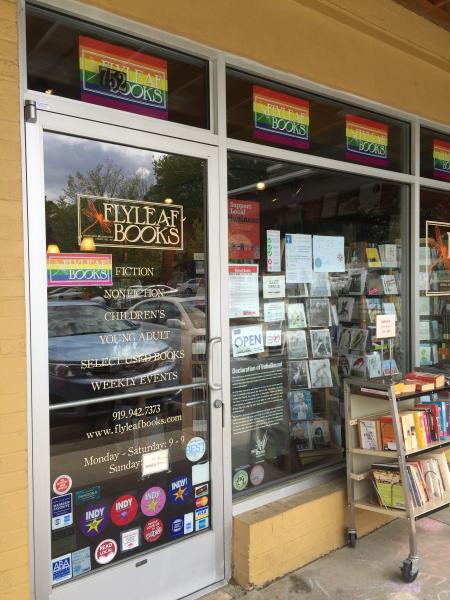 The morning after H.B. 2 passed, the town of Chapel Hill and the neighboring town of Carrboro issued a joint resolution that condemned the bill and encouraged businesses to fly their gay pride flags in a show of support. Flyleaf responded by adding the rainbow pride flag to its traditional logo; the new logo is on the store’s website, as well as on the door and windows at the front of the shop. Flyleaf debuted the new logo on its social media pages on March 29 with the comment, “All are welcome here.”

“In general, I don’t want the bookstore to take a political stand because I want to encourage everyone to feel welcome, and I mean everyone,” stressed Fiocco. “But I feel that this particular legislative action has gone beyond the pale, and it’s not something I can stand by and not take a stand against….This is not the type of community that I want to cultivate.”

Fiocco is now looking for a way around national building code regulations that require the store, because it can host up to 300 people for events, to have separate and labeled restrooms for men and women. “If we had $20,000, we would just add a third restroom. But small businesses can’t afford to do that,” she said.

To foster discussion on the subject, Flyleaf will host the Small Business Majority roundtable “Workplace Nondiscrimination, H.B. 2, and Your North Carolina Small Business” on April 21, which will provide a forum for conversation among advocates and small business owners on how legislation such as H.B. 2 impacts North Carolina’s business climate.

Fiocco is joining with Linda-Marie Barrett, the general manager of Malaprop’s Bookstore/Café in Asheville, and Sarah Goddin, manager of Quail Ridge Books & Music in Raleigh, to write a letter to North Carolina Governor Pat McCrory and the legislature calling for a repeal of H.B. 2. More than 20 fellow North Carolina bookstores have signed onto the letter.

Malaprop’s has also taken steps to ensure transgender customers feel welcome in the store, including posting #IllGoWithYou signs on its bathroom doors. The #IllGoWithYou project pairs allies with transgender people for trips to bathrooms or other spaces where safety might be a concern. “We want our customers to know we are their allies and we don’t support H.B. 2,” said Barrett.

But Barrett said she is already seeing the economic impact of H.B. 2 in the Asheville area. “Headlines in the Asheville Citizen Times chronicle daily the various businesses and conferences that are changing plans and not locating here or pulling out. Malaprop’s directly benefits from Asheville’s thriving tourist economy during the summer and fall months. If we see a big drop in tourist traffic, it will have a very damaging impact on our store,” she said.

Over the weekend, Barrett received a letter from an out-of-state customer who said she will no longer be visiting North Carolina, and, therefore, Malaprop’s. “I realize that it is not your fault, but I refuse to spend my money in a state that is so discriminatory that it makes a law to tell people which bathroom to use. Oh, I’m fine using the bathroom that matches the gender on my birth certificate. I am not fine with telling others that they must do the same,” the customer wrote.

The authors wrote that while they would still visit schools and libraries in the state, “we cannot and will not support a state government that promotes discrimination. Each one of us will have to consider our participation in conferences and festivals in North Carolina while this law is in place.”

Malaprop’s responded to the authors with its own open letter, asking that they include independent bookstores among the venues they will continue to visit. Author Sherman Alexie, who is not a signatory of the letter, canceled all upcoming visits to North Carolina, including a May event at Malaprop’s.

“If more authors boycott North Carolina because of H.B. 2, we will be financially stricken. We sympathize with their stance, but we hope that authors will choose another way to protest. By protesting in this manner, targeting bookstores, they are directly hurting their fiercest allies. Please don’t abandon us; we need your support now more than ever,” Malaprop’s letter said.

The groups asked that authors, illustrators, and publishers not boycott North Carolina bookstores. “Independent booksellers opposed H.B. 2 in the legislature and are actively seeking its repeal. In addition, they have a long history of fighting efforts to censor books with LGBTQ themes. The punishment for passing H.B. 2 should fall on the governor and state legislators, not on booksellers who play a vital role in promoting tolerance and diversity,” their statement said.

Tom Campbell, owner of The Regulator Bookshop in Durham, issued an open letter of his own to propose that authors show their support for bookstores against policies like H.B. 2 by continuing to visit them. Through events held under the “Liberty and Justice” banner, a portion of the author’s and bookstore’s proceeds would go to the North Carolina ACLU and the North Carolina Justice Center, which are fighting H.B. 2, Campbell suggested.

“It would be sad indeed if one of the effects of this legislation was to diminish the number and strength of voices speaking out here for openness, inclusion, fairness, and non-discrimination,” wrote Campbell. 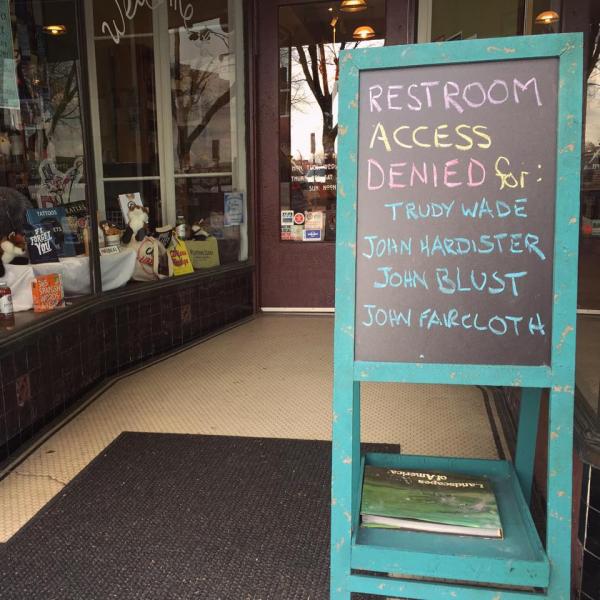 To express its position on the issue, Scuppernong Books in Greensboro created a YouTube video, Gender and Soxuality in North Carolina, which uses sock puppets to show off Scuppernong’s now gender-neutral bathrooms (previously, one was women’s-only and one was unisex). The store also set out a sandwich board that listed several of the legislators who voted in favor of the bill for whom restroom access at the store is now denied.

“We decided to take a stand because the law is patently ridiculous and affects every one of us in the state,” said Scuppernong co-owner Steve Mitchell, who added that the law also prohibits filing suits in state courts related to any kind of discrimination. “We are not only taking a stand against discrimination of the LGBTQ community, but all types of discrimination.”

Scuppernong has invited area legislators to participate in a public forum on House Bill 2 at the store, but none have accepted.

“This bill is not indicative of North Carolina and it’s not an accurate reflection of the feelings of the populace. We’ve had folks order books from us from as far away as Pennsylvania simply because they’ve heard of the sign and seen the sock puppet video,” said Mitchell. “We’re noisy around here. We’ll continue to respond to our community, in positive and constructive ways, I hope. That’s how we see the role of an independent bookstore. For us, it’s part of the mission.”

In a New York Times op-ed on April 8, author Allan Gurganus recalled Nancy Olson, founder of Quail Ridge Books & Music in Raleigh, who died last month, noting that she, in particular, would have lent a critical voice to this debate, as well as expert guidance on what books would be helpful in such a situation.

“How singular and pivotal one book dealer can be in a North Carolina that now seems run for and by Charlotte’s D+ mediocrities,” Gurganus wrote. “Where are 10,000 other folks willing to come out and say: ‘Respect is better than hate. Love always outranks enemy making. And this book, unlike that lazy escapist junk you picked first, is a great book. Read it. Then come back and I swear I’ll send you to 40 more this good or better. Trust me? You can trust me.’”