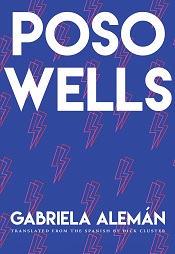 “Poso Wells is a rare achievement in which a reader comes out the other end wanting to start again. A bold and clever tale woven with a unique voice, it is poised to have a longstanding impression on readers for years to come,” said Indies Introduce panelist Rebecca George of Volumes Bookcafe in Chicago, Illinois.

Alemán was born to Ecuadorian parents (a diplomat and a poet) in Rio de Janeiro, Brazil. She spent much of her youth outside of Ecuador before returning to live in Quito. She holds a master’s degree in Latin American literature from Quito’s Universidad Andina Simón Bolívar as well as a PhD in Latin American cinema from Tulane University in New Orleans, Louisiana.

Here, Alemán and George discuss Poso Wells, the author’s first novel to be translated into English, and its continued relevance since first being published in Spanish 10 years ago.

Rebecca George: While this is your first novel to be translated into English, it is far from your first published work. What do you hope your new audience walks away with after reading Poso Wells?

Gabriela Alemán: I would love for the story to lead them to discover a country with a rich cultural tradition with many ties to the U.S. Our most well-known poet, Jorge Carrera Andrade, was a friend of William Carlos Williams; John Dos Passos spent some time in Ecuador, as did Jack London and Herman Melville (the Galapagos), and Moritz Thomsen’s book Living Poor, which has sold more than one million copies since it was published, is set in Ecuador. Poso Wells is the first of a trilogy, so I would hope that a new audience would want more.

RG: By itself, satire is a great way to highlight the inadequacies and glaring disconnect between a government and its people. What inspired you to add the touches of magical realism?

GA: H.G. Wells. Maybe I would call it more sci-fi/fantasy than magical realism. I started off with his short story “The Country of the Blind,” set in Ecuador, and its blind protagonists and later moved on to Ecuadorian politics and our “blind” politicians; after that, things started falling into place. I grabbed hold of news items and then gave them a twist: women disappearing, plundering of the land, corrupt politicians. When I started writing Poso Wells, the beginning of what has come to be our day-to-day was just emerging: fake news, an overload of information added to the disappearance of newspapers or cut downs in investigative reporting, mega corporations and their lobbying of governments… I got the sense that people were no longer “seeing” what was right in front of them. Giving the “magical” twist called attention to things that were happening all the time, all over the world. Truth can show up in unexpected ways in fiction. Sci-fi, since the 1970s, has had that going for it; it creates “other” worlds where everything that is wrong with this one can be seen more clearly.

RG: It’s been 10 years since Poso Wells was first published. Do you find that the work is more or less reflective of the world we live in now?

GA: What I developed in the novel as a dystopic future has, in only 10 years, come to be. The Intag Cloud Forest doesn’t have a Canadian mining company trying to extract copper and gold with zero interest for the ecological destruction of the forest, but it has the governments of Ecuador and Chile beginning a joint mining exploit with no interest for the inhabitants of the area and their water supply and zero interest for the ecological destruction of the Cloud Forest. Politicians are just as corrupt, and love still tends to play an important part in our everyday lives.

RG: A number of people have thrown around the term “eco thriller” to describe this book. Do you agree with that label?

GA: Poso has a lot of cliffhangers and multiple narratives driving the novel forward, and it is set in three very distinct parts of Ecuador: Quito, the capital; Guayaquil, the main financial city; and Intag, one of the 10 ecological hot spots of the world. The political and financial decisions taken in the capital and in the largest city of the country all have mining, and the destruction of a way of life, at their center. So I’d say eco-thriller describes it pretty well.

RG: One of my favorite things about translated works such as this is that the lyrical tone of the original language is often delightfully present. As a writer who has studied translation at length, do you find in your own work that the translation keeps the intended tone?

GA: It not only keeps the tone, it goes beyond that; because I had H.G. Wells in my head while I was writing, I was “thinking” the novel in English while I was writing the words down in Spanish. Dick Cluster’s translation manages to rewrite what I had in my head with other words. When I read it for the first time, I had the sensation that this was a parallel novel that had already been written but had somehow disappeared. The translation, for me, discovers that hidden copy.