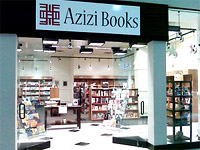 When Kevin Roberts and daughter Maia Roberts launched an online African-American bookstore a few years ago, they were well aware that "there was a lot more out there" than the small selection of African-American titles they saw at a local chain. Now, the pair has brought many of those titles to the residents of Matteson, Illinois, a suburb about 30 miles south of Chicago, through Azizi Books, an African-American specialty store, which opened in the Lincoln Mall in November 2007.

"Our overall mission was to create a place that would expose and enlighten the community to the many books that speak to the African-American experience, and bring some community spirit back into the neighborhood at the same time," explained Maia Roberts.

The Robertses had worked together long before Azizi, which means rare, precious, or treasured in Kiswahili. "We are a team," said Maia Roberts. "We both earned our MBAs at the same time and used Azizi Books as our final business plan project.... I worked with [my father] on the website www.blackbooksdirect.com while I was in school for about a year, before we began talking about opening a bricks-and-mortar store." To further prepare for the opening of their physical location, Roberts attended last fall's "Opening a Bookstore" workshop run by Paz & Associates in conjunction with the Great Lakes Booksellers Association trade show.

The 1,400-square-foot store carries about 7,000 titles, and has a "clean and contemporary feel," Roberts said. Bestselling sections include children's books, fiction, and biography. Azizi opts for a lot of face-outs to make choosing titles easier. "We find that many people are not actually aware of the many African-American books that are out there, so face-outs help to pull them in, especially in the children's section."

The Robertses still maintain their online store, Black Books Direct, and they also have a website for the bookstore, www.azizibooks.com, as well as a bookstore blog, azizibooks.blogspot.com. Roberts said multi-channel communication allows her to more effectively reach the bookstore's customer base. "I think that the blog helps customer to connect with me, personally. I feel that when they connect with my thoughts they can connect to the store as well because it's such an extension of me and my father. It helps to spark conversations. [Customers] know that we are real people which also helps to separate us from the chains."

After seeing the IndieBound materials in the Literary Liberation Box, Roberts thought they could also help solidify that separation, and she showed them to the bookstore's neighboring businesses in the mall, which features mostly local independent stores rather than chains. "Kevin sits on the mall advisory committee and has presented the program to the other members," Roberts said. "No plans have been made yet, but members were very interested in the movement."

Celebrating her indie pride, Roberts immediately made use of the Lib Box contents. "I am always wearing the button! So when people ask me about it, I can hit them with a bit of knowledge about the movement. We have put the posters up in our windows, and have handed out some of other materials. In the future, I look forward to using the IndieBound bags.... We are also looking forward to getting involved and making recommendations for the Indie Next List.

"I really loved getting the items in the IndieBound box," Roberts said. "It motivated me to work harder to get the message out about our store and the independent retailer movement in general. I think that it is so important. It made me want to get everyone involved and aware." --Karen Schechner