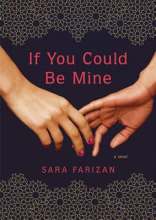 Sara Farizan is the author of If You Could Be Mine (Algonquin Young Readers), a YA novel about being gay and in love in Iran. A Massachusetts native, Farizan has worked as a Hollywood intern, a waitress, a comic book/record store employee, an art magazine blogger, a marketing temp, and an after-school teacher. She holds an MFA from Lesley University and a BA in film and media studies from American University.

How did your own experiences help you write If You Could Be Mine?

Sara Farizan: I was pretty passionate about the subject matter. I was closeted for a very long time and dealt with a lot of fear and anxiety because of society at large and because of the culture that my parents came from. Even though I don’t live in Iran, I understand the things that aren’t spoken about and how damaging that can be for someone who doesn’t feel like they belong.

What do you hope readers will take away from your debut novel?

SF: I hope they take away that it is a love story, but it’s also a story about finding yourself and being true to who you are, even when that seems really terrifying. I would also like teenage readers to think more about people like them who live in different parts of the world, who live different lives but are human and also listen to music and eat hamburgers like any other teenagers.

SF: My mother reading me picture books, and sounding out letters and words on Sesame Street.

Why do you think Young Adult fiction is so important?

SF: I think YA is amazing because the protagonists are teens and the voice in YA is so crucial, especially if that voice does not condescend to its audience. I think it’s important for young people to see themselves reflected in media, and that means all young people. LGBT characters; characters of different ethnicities, cultural backgrounds, and races; characters that have different socio-economic situations; and characters that are dealing with hard or topical issues.

SF: I have a book coming out with Algonquin next year titled Tell Me Again How a Crush Should Feel. It’s set in a New England prep school, and it’s full of love triangles, embarrassing moments, theater rehearsals, so it’s a typical YA plot, only the characters are of diverse backgrounds and the main love story is a LGBT one.

At what point did you start calling yourself an author?

SF: I still can’t really believe it. I just call myself Sara. But I am very grateful that I am an author and hope I can keep telling stories that people will find interesting.

If you were a bookseller, is there a book you would say YA readers just have to read? (Besides your own, of course!)

SF: I have to give booksellers so much credit; I don’t know that I am as clever or hard-working. But if I were one, I would recommend Two Boys Kissing by David Levithan, Winger by Andrew Smith, Beneath a Meth Moon by Jaqueline Woodson, Gypsy Davey by Chris Lynch, and Weetzie Bat by Francesca Lia Block.

SF: Just three? What the hell else am I going to do on an island? The Amazing Adventures of Kavalier and Clay by Michael Chabon, Up in the Old Hotel by Joseph Mitchell, and The Hotel New Hampshire by John Irving.

ABA member stores are invited to use this, or any other interviews in our series of Q&As with Indies Introduce Debut Authors, in newsletters and social media and in online and in-store promotions (and we’d love to hear if you do).