At the Children’s Institute in Pasadena last month, booksellers and authors at the forefront of the We Need Diverse Books movement shared a host of strategies on how best to promote diverse messages and content through in-store displays, events, and hiring practices.

Presented by the ABC Group at ABA, the panel “Best Practices for Greater Diversity — What Message Is Your Store Sending?” featured Lynn Mooney of Women & Children First in Chicago, Illinois; Hannah Moushabeck of Odyssey Bookshop in South Hadley, Massachusetts; I.W. Gregorio, an author and the vice president of development for We Need Diverse Books; and Aisha Saeed, an author and the vice president of strategy for We Need Diverse Books. Sara Hines of Eight Cousins in Falmouth, Massachusetts, moderated the discussion, with prompts touching on both the subtle and overt messages stores send to their customers through the books they represent, the events they program, and the people they employ. 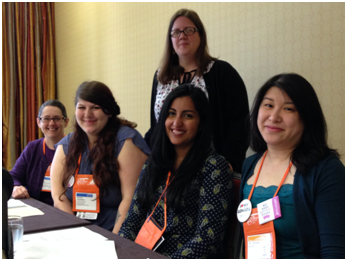 Displays were a common theme throughout the discussion. Highlighting the power of visibility both in stores and on social media, Gregorio emphasized the value of including signage with the hashtag #diversebooks to increase customer awareness of the ongoing conversation. She also underscored how celebrating diversity regularly through inclusive visual storytelling can help chip away at the “invisible barriers and underlying assumptions that prevent people from buying books.”

Saeed shared a memorable experience that illustrated both the power of displays and the potential for messages about diversity to go viral. On a holiday outing with her family last summer, Saeed saw her first-ever in-store Ramadan display at a bookstore in Atlanta. “I’ve gone to bookstores my entire life — I’ve never seen that,” Saeed remarked. Tempted to buy every book in the display, she was informed by a frontline bookseller that there was only one copy of each book in the store. Opting to leave the display intact, Saeed tweeted a picture of the display to thousands of her Twitter followers. It garnered hundreds of favorites and retweets overnight. New customers called the store all week with request after request for the books they’d seen on Twitter, citing #RamadanReads and We Need Diverse Books. In short order, the Ramadan titles became the bestselling books in the store.

In addition to drawing inspiration from national and world holidays, Gregorio noted that displays on current events can fuel customers’ desire to learn more about the impulses behind discrimination, oppression, or violence in their own communities. “Everything is an opportunity,” Gregorio said. “When people are talking about issues, you can really capitalize on it.”

The panelists readily agreed that a local bookstore is in a unique position to fill those community needs. “I think sometimes it really pays off to be courageous, and to try to be ahead of the curve,” Mooney said, citing as an example how Women & Children First reacted soon after the shooting of Michael Brown in Ferguson, Missouri, last summer by creating a dedicated window display. “We didn’t wait for it to be a big thing in the news. It wasn’t huge yet. People weren’t marching in the streets yet. But we did a window — we called it Rest in Power, basically on a police brutality theme.”

Mooney added that raising awareness of controversial or politicized topics through displays without taking sides “exposes customers to the fact that there is book-length material on these subjects that we can quickly bring in, [and that] we’re a place that welcomes these conversations.”

As the panel discussion shifted from what to whom customers see out on the sales floor, Mooney spoke passionately about the benefits of employee diversity and equal opportunity hiring practices. “I do feel strongly that once you have a diverse staff, you start to get more diverse applicants,” she said, emphasizing that her perspective has only been strengthened by co-owning Women & Children First with a business partner who has a disability. She also advocated for applicants who demonstrate a commitment to diversity even before starting work at the store. “Having people on staff who are already passionate about these issues reduces the training you have to do,” she said.

For the bookseller panelists, fostering diversity through events extends far beyond the confines of the physical storefront. Mooney shared a recent success that illustrated how an extra effort to reach more than the usual customer base came back to the store tenfold. To promote an event with author Edwidge Danticat, Women & Children First reached out to the Haitian community in Chicago by contacting the Haitian embassy and the Haitian American Community Association. As a result of that outreach, the embassy ambassador himself attended the event, as well as the director of the cultural center. “I just think of the wealth of things that I learned about my world because of this author tour,” Mooney said, adding that Danticat really noticed the extra effort. “She was really impressed and delighted. When you go that extra mile, it really pays off.”

Reinforcing the need for booksellers to reach beyond their own stores to promote diversity to the greater community, Moushabeck urged them to take the time to review diverse books and nominate them to the Indie Next Lists. She encouraged the booksellers in attendance to think about “not just handselling them in your store and selling them locally, but celebrating them on a national level to push publishers to what we want,” while letting fellow booksellers know about great new finds. “It’s important that we celebrate [diverse titles] as soon as they are out of the gate,” she said, so the books can gain important early traction and publishers can notice more of the kinds of diverse books that inspire enthusiasm.

To finish out the discussion, Eight Cousins’ Hines spoke thoughtfully on staying open to opportunities for handselling diverse titles more often, as well as how to listen for when customers are most receptive. “People seem to want to have the dialogue,” she observed, even when they are resisting a book or putting it back on the shelf. Hines has had several productive conversations with customers about that resistance, often learning more about the customer in the process. “‘I’m looking for diverse books’ is really not what people say,” she said. By establishing a history of honest dialogue, booksellers can better understand where the customer is coming from and apply that knowledge to future recommendations.