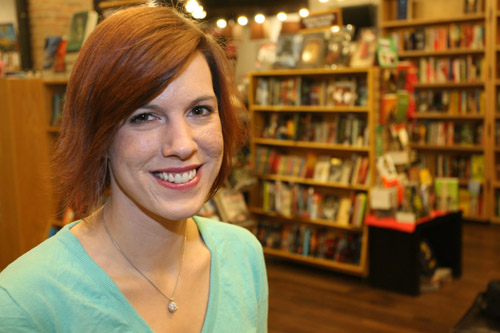 Through this on-demand virtual story time, young viewers are encouraged to sing, clap, and read along with Gustafson, bringing into homes at any time of day the excitement of the weekly story time that The Bookworm hosts in-store each Monday.

“A few story time attendees mentioned to me that it would be great if we put story time on television or online,” said Gustafson. “The idea stuck with me. How cool would it be to have a book-related program that was short, educational, and fun for families to watch? Sort of like a modern Reading Rainbow!”

New videos are added each week to the Wiggle Worms channel, and viewers are encouraged to visit the store in-person or online to get their own copies of the featured titles.

More than 15 short videos are currently available from Wiggle Worms, including readings of The Dark by Lemony Snicket and illustrated by Jon Klassen (Little, Brown Books for Young Readers); The Book With No Pictures by B.J. Novak (Dial); and If You Give a Mouse a Cookie by Laura Numeroff and illustrated by Felicia Bond (HarperCollins).

Already, the video reading for Brown Bear, Brown Bear, What Do You See? by Bill Martin Jr. and Eric Carle (Henry Holt Books for Young Readers) has racked up more than 600 views. Following the catchy introduction and theme song, Gustafson kicks off the story time with a clapping exercise, enthusiastically shares the story and its pictures, and concludes with a song.