Shakespeare & Co. will be opening another location in Brookfield Place, a retail mall in New York City, in January 2020.

Linda’s Story Time in Monroe, Connecticut, will reopen under new ownership as Turning the Page. The grand opening is scheduled for June 1. 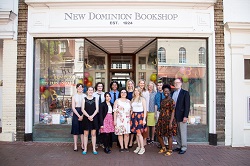 Old Town Books, which started as a pop-up, has announced that it will remain open permanently in Alexandria, Virginia.

Northshire Bookstore in Manchester, Vermont, will welcome a new café this month in the space formerly occupied by Next Chapter Café.

Carmichael’s Bookstore in Louisville, Kentucky, was featured in a New York Times article titled “Where the Family Business Is Selling Books.”

The U.S. Daily News featured Jane Addams Book Shop in Champaign, Illinois, and Literati Bookstore in Ann Arbor, Michigan, on a list of places to visit during a weekend getaway.

Uncle Bobbie’s Coffee & Books, MahoganyBooks, Sankofa Video and Books Cafe, The Lit. Bar, and Pyramid Books were featured on a list of 15 black-owned bookstores in the U.S.

New Dominion Bookshop in Charlottesville, Virginia, celebrated this year’s Independent Bookstore Day with its second annual Rose Garden Party. Said Sarah Crossland, “The party was a roaring success, with customers new and old. The first roses of the season (one variety of which is aptly called ‘City Girl’) made a starring appearance.”

BookPeople will be collaborating with the Austin ISD Libraries to host the 2019 Summer Reading Splash on Saturday, May 18, in Austin, Texas.

The Johns Hopkins News-Letter talked with Greedy Reads in Baltimore.

Square Books in Oxford, Mississippi, received a Citation of Merit by the Mississippi Institute of Arts and Letters.

Hoodline looked at the best bookstores in Milwaukee and Washington, D.C.