Reads & Company is planning to open in Phoenixville, Pennsylvania, in mid-April. 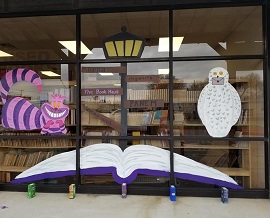 A peek at The Book Haus' new location.

[word] Bookstore in Maplewood, New Jersey, will celebrate its 10th anniversary from now until February 2.

The Book Haus in New Braunfels, Texas, is on the move. A grand opening will take place in its new location on Saturday, January 26.

A Novel Idea on Passyunk, Shakespeare & Co., and Uncle Bobbie’s Books and Coffee were featured in an article called “Independent bookstores are coming back in Philly, across the U.S.”

Northshire Bookstore in Saratoga Springs, New York, and Manchester Center, Vermont, is accepting applications for the 2019 Open Mind scholarship, which honors the diversity of thought, feelings, information, and perspectives found in books. The store offers two high school seniors $1,000 each for college.

Tattered Cover Book Store in Denver, Colorado, will partner with the Arvada Center and Regis University to present the Colorado Book and Arts Festival.

A number of ABA member stores were featured in Electric Literature’s list of Instagrammable bookstore cats.