Jersey City, New Jersey, residents will soon be able to pick up a book with their coffee before hopping on the train to Manhattan.

Taking advantage of its new space that formerly housed a fast food restaurant, WORD owner Christine Onorati plans for the built-in walk-up window — that once served burgers — to open at 7:00 a.m. (two hours earlier than the store) and serve morning commuters. “We’ll do coffee and pastry — and books, if people want them!” said Onorati. 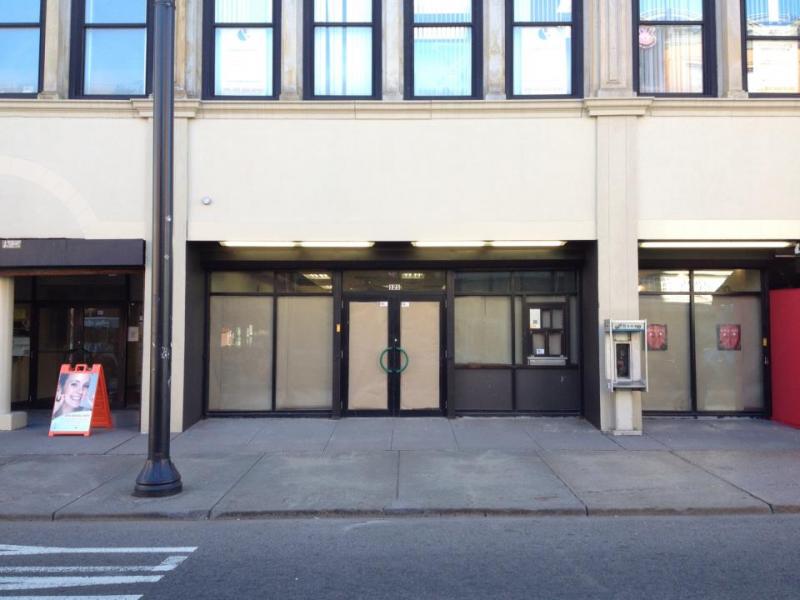 WORD Jersey City is aiming to open in mid-September at 123 Newark Avenue, a 2,400-square-foot storefront in a commercial building near the bustling Grove Street transit hub. The Brooklyn-based bookstore, now in its sixth year of business and having cultivated a strong presence in its community in New York, is extending its book expertise and praised events to residents in New Jersey.

Though she had never planned to open a second location, Onorati’s cousins alerted her to a vacant storefront next door to their Italian restaurant, Roman Nose, in a busy section of the city, she explained recently.

Formerly a Burger King restaurant, the space is requiring a bit of work to transform it into a hip, urban bookstore. With the interior demolition completed, contractors are now moving in to install the HVAC system, to lay a new floor, and to take down the drop ceiling.

The interior of the store will be outfitted with several bookshelves that came from Chester County Book Company in Pennsylvania, which transitioned into a smaller location earlier this year, and the setup of the fixtures will be designed to allow for a flexible event space. A stage will be in the back of the store with all racks in the center of the store set on casters for easy moving. “We’re doing everything right, from the beginning,” said Onorati.

“I love having the basement space in Brooklyn for events, but it can be too small,” said Onorati. That’s why the Jersey City store is designed to accommodate small and intimate events, but can easily be opened up to fit 300 standing guests — all of whom will have clear sightlines to the stage. “I’m not a big fan of going to events where I can’t see or hear, so I wanted to make sure we had that flexibility to do events of all sizes,” said Onorati.

The store’s construction did not delay its first event. Jersey City watering hole Barcade hosted author Chuck Klosterman and a crowd of 250 people, seated among arcade games with drinks in hand. “The event was amazing,” said Onorati. “It made me feel very hopeful that this neighborhood is excited to have us here. That gave me a little boost to get through the next few months.”

The new bookstore will also house a café, which will take up just less than half of the store’s space and will include seating for customers to enjoy soups, salads, and sandwiches from Roman Nose restaurant next door. It will also be the only location in Jersey City offering Stumptown coffee, which has become a staple for Brooklyn locals for its fair trade practices and quality beans.

“I always joked that I would never have coffee in Brooklyn because we have coffee shops everywhere. In Jersey City it’s not there yet, though I’m sure it will soon. I felt in a store like this it made sense to have a component of food and drink, and it helps the bottom line,” said Onorati. She found immense support from Stumptown Coffee Roasters, which offered her a full training and assisted in the designing of the café. Once WORD’s baristas come on board, Stumptown will provide in-house training for the new staff.

The developing book inventory at the Jersey City store is currently similar to Brooklyn’s eclectic mix of titles, but Onorati is preparing to bring in books based on what her future customers want. “It’s always kind of guesswork,” she said, so she plans to “take some time to get to know the neighborhood and what they want out of us.” Because the bookstore is situated at a transit station that leads to a business-heavy district of New York City, Onorati expects to acquire some mainstream titles and business-interest books.

Onorati is especially looking forward to bringing in the items that she didn’t have room for in the Brooklyn store, including art supplies, additional sidelines, and an expanded children’s section. Eyeing toys and sketchbooks for the large population of families in the city, Onorati wants to “make it easy for anyone who needs a birthday gift to come in and pick up a onesie.”

Opening orders for fall inventory have already been placed and are stacking up in the basement, which has proven to be incredibly useful in these initial stages, both for storing inventory and supplies and for staging WORD’s book fairs. “In Jersey City, we have a lot of schools that we are excited about working with. We’re always looking for things that expand our business beyond the four walls,” said Onorati.

Committed to making bookselling a viable career for young people, Onorati looks for and hires highly motivated and qualified candidates to work for WORD, and then works hard to retain them. Already in Jersey City, “we’re getting the most amazing résumés,” Onorati said, after putting out the word for a café coordinator, an inventory manager, and an events coordinator to join the store manager and children’s section manager already on staff. Onorati plans for the baristas, all experienced and skilled at the task, to be passionate book lovers as well.

With the hope of opening the doors next month, Onorati is looking forward to getting to know her new team of employees and Jersey City’s community. “I can’t wait to get this store going. It’s given me a new excitement for books,” she said.