As Wildfires Rage Nearby, Maria’s Bookshop Pulls Together With Community

Although Durango, Colorado, home to Maria’s Bookshop since 1984, is currently in the path of an ever-expanding wildfire, the store and the rest of the city’s downtown business district have received increasing support from the media and the public. 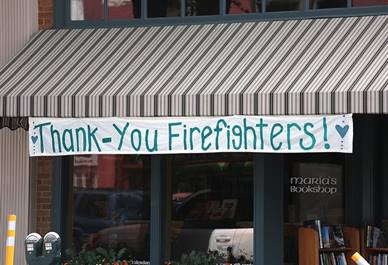 The 416 Fire team announced on Tuesday, June 26, that the wildfire outside of the city had expanded to nearly 35,000 acres. The fire, which has been burning in San Juan National Park since June 1, is currently 36 percent contained as of Monday, according to Firehouse.com, though experts have said it could continue to expand because of hot temperatures forecast for the week. So far, thousands of homes have been evacuated and tens of thousands of acres burned, according to the Durango Telegraph.

While the fire has hurt business for many downtown retailers, including the Main Avenue bookstore owned by Peter Schertz and Andrea Avantaggio, Schertz told the Durango Herald that “there is a silver lining here…It’s the community unification, and it’s really powerful.” 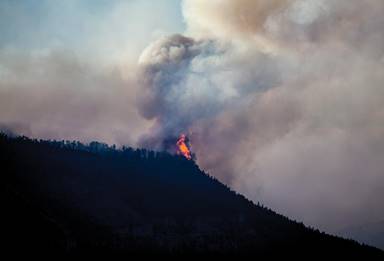 The 416 wildfire is currently sweeping through southwestern Colorado.

Several area businesses and organizations have created special promotions to support evacuees and firefighters, the Durango Telegraph reported, and many of them, along with Local First and the Business Improvement District, have been working on a campaign to draw customers back to the area. On Friday, June 15, Democratic Governor John Hickenlooper visited downtown Durango to hear about the economic impacts of the fire, after businesses advocated for help securing emergency funding.

“It’s a good/bad thing,” Schertz told Bookselling This Week. “We’ve gotten a ton of media attention, including NPR and all the major news outlets. Our governor visited the bookshop to try to get the message out that Durango is still open for business. He also bought an ice cream down the street. Our governor is the best.” 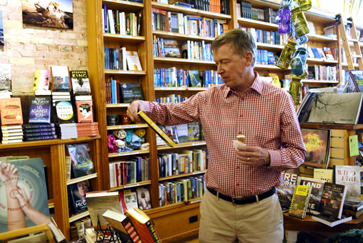 Governor Jim Hickenlooper visited Maria's Bookshop and other stores to show that downtown Durango is open for business.

Schertz also said that this disaster reminds him of when the store teamed up with the local library, and the local newspaper for Book Sense’s nationwide “Fire on the Mountain” campaign in 2002, when the Missionary Ridge and Valley fires swept through the area. At the time, the History Channel donated $2,500 to the Durango Fire and Rescue Authority, thanks to the store’s efforts to raise money for local firefighters with events and displays promoting Fire on the Mountain: The True Story of the South Canyon Fire by John N. Mclean (Washington Square Press) and the History Channel documentary based on the book.

“There was a magic community dynamic back then,” Schertz said, “just as there is now, as we all pull together to get through this episode.”