In 2011, two independent bookstores at opposite ends of the country — Arizona’s Antigone Books and New Hampshire’s MainStreet BookEnds — transitioned fully to solar energy systems for their electricity needs. Since then, each bookstore has seen decreased energy costs while continuing to make additional strides toward helping the environment. 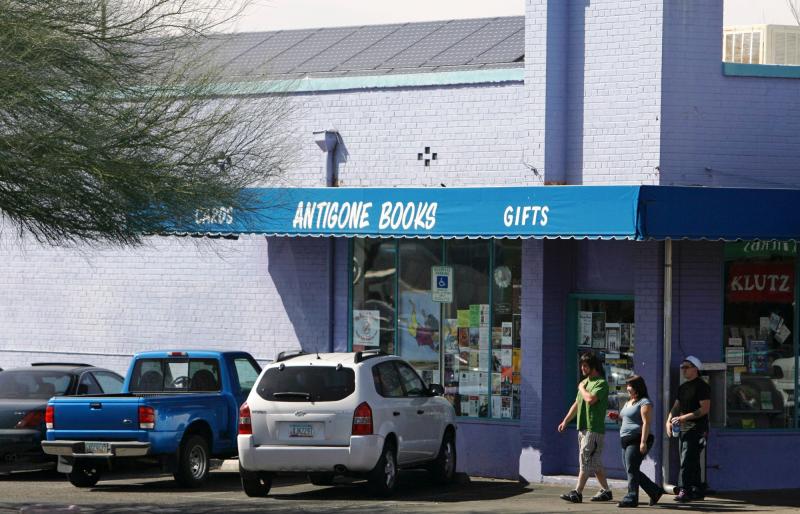 Antigone Books went 100 percent solar in March 2011. “I always assumed it would be too expensive,” said Trudy Mills, who owns the bookstore with Kate Randall. “It happened that I asked at the exact moment when the state and federal governments had lots of solar credits and grants available. We were lucky in that respect.”

Through these grants, Antigone Books was able to cover 75 percent of the cost of the 13.7 kilowatt system, paying just 25 percent on its own. Opened in 1973, the bookstore is located in the Fourth Avenue shopping district in downtown Tucson, Arizona, where two neighboring businesses — Brooklyn Pizza Company and Sky Bar — are also solar-powered.

“We got so many credits and grants that we paid off the system in four years,” said Mills, though she cautioned that there is less governmental support for such initiatives now than there was in 2011. “That’s something that constantly changes.”

Antigone pays approximately $18 each month to be on the local electrical grid and sells any extra energy to the electric company, building up credit to use as the store needs it. “In our case, we generate extra energy most months and then use our credit during the hot part of the summer, when the air conditioning is on,” said Mills. 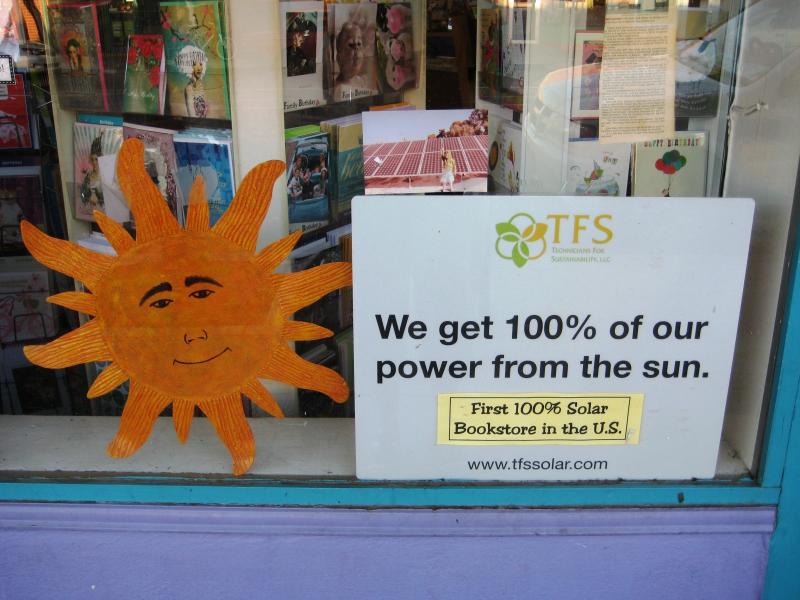 The company Antigone worked with, Technicians for Sustainability, determined the type of setup the 4,500-square-foot bookstore needed based on past usage. The bookstore owns its building, so adding several solar panels to the store’s roof did not pose any issues.

Mills recommends that booksellers think carefully about the company they choose to work with. “I would suggest finding a company that has a good reputation and get their advice. For example, this company looked at my house and suggested that I forgo solar because I had so many trees and so little usage. They weren’t just in it to make a quick sale,” she said.

So far, Antigone Books has seen no downside to switching to solar power, said Mills. “It only disrupted businesses for a few minutes when the hookup to the electric company happened.”

Beyond utilizing solar power as part of its goal to be kinder to the environment, Antigone Books has also installed an electric vehicle charging station and sells bus passes at no profit to encourage the use of public transportation.

In Warner, New Hampshire, MainStreet BookEnds of Warner went 100 percent solar in December 2011. “The decision was easy, as it connects to our longtime commitment of moving from non-renewable to renewable sources of energy,” said Katharine Nevins, who co-owns the bookstore with her husband, Neil.

The community has responded positively to the installation of solar panels behind the bookstore, which is housed on the first floor of a centuries-old colonial home. Having the solar initiative visibly present on Main Street “serves as a working demonstration of this needed change to solar energy,” said Nevins. “We have a nifty read-out running in the store that shows, with a pie-chart, how much electricity the building is currently using, and how much energy is coming in through the solar panels.”

MainStreet BookEnds was able to take advantage of federal grants from the USDA Rural Development program and the U.S. Treasury, as well as a state energy grant through New Hampshire. Collectively, these grants covered 75 percent of the total cost of the system’s installation. “Once we understood we had this option in front of us, we couldn’t afford not to do it,” said Nevins, who added that, years later, she too has found no downside to making this switch. 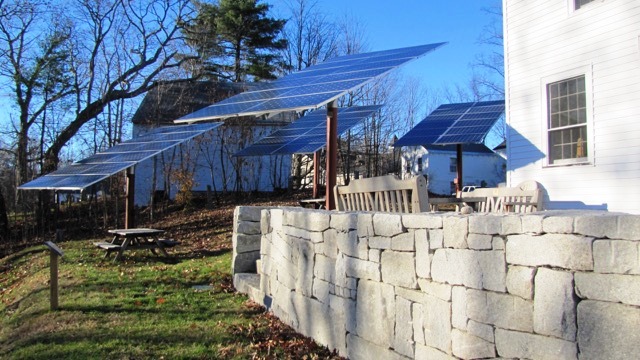 Like Antigone Books, MainStreet BookEnds is tied into the local electrical grid and daily electrical production, including excess, is banked as credit to be used as needed. The 11.5 kilowatt system, a number generated based on the store’s overall electricity use for a year, fully provides for the electrical needs of the building, as well as the adjacent park. “This has been so successful that now, with net metering, we have the ability to include up to four additional meters to cover the electrical needs for other businesses on Main Street,” said Nevins.

The Jim Mitchell Community Park surrounds the bookstore and features an amphitheater and performance stage utilized by MainStreet Warner, Inc., a nonprofit that promotes arts and education in the town. The park, named for Nevins’ late brother, who co-founded the bookstore in 1998 and designed the park, is a fully sustainable extension of the bookstore; all its electrical needs are supplied through the shop’s solar panels, and it has a rainwater collection irrigation system and landscaping with edible plants.

Based on the success of MainStreet BookEnds’ transition to solar energy, the town of Warner is working to develop a 200 kilowatt system to supply the electrical needs of all town buildings. “More and more individuals and businesses have moved to solar in the last few years in our town, and people constantly come into the bookstore to ask us questions,” said Nevins. “It’s great to be able to showcase this through our downtown business, and to serve as a model of change for other businesses in the area. We have always hoped the bookstore could provide a vehicle for community education on all levels.”