In June, building on the success of the Hotel California at BookExpo America (BEA) 2003 and of this year's Hotel ABA - Chicago, ABA announced the creation of the Hotel ABA - New York City for BEA 2005. The trade show and ABA Convention will be held from Thursday, June 2 - Sunday, June 5, at the Jacob Javits Convention Center. ABA, working with BEA staff, has secured the Park Central Times Square Hotel as the hotel for ABA bookstore members, at a special room rate of $125 per night, and began taking advance reservations in June. Plans are currently underway to make this the best Hotel ABA yet.

Booksellers who have already pre-registered for Hotel ABA - NYC can expect a call from ABA in December to gather credit card information and arrival and departure dates. For ABA member booksellers who have not yet taken advantage of the opportunity to reserve a room before general registration opens, there is still time to do so. A pre-registration form can be downloaded (in PDF format) by clicking here. 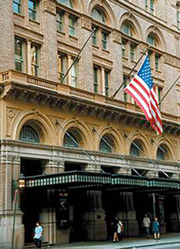 The Park Central is situated in the heart of midtown Manhattan, just blocks from Rockefeller Center, Times Square, Fifth Avenue shops, Carnegie Hall, and Central Park. It is a 10-minute ride to the convention center and 30 minutes from LaGuardia Airport.

Hotel ABA - NYC, for ABA bookstore members only, will feature many of the same amenities provided at the Hotel ABA - Chicago, and more. Among the benefits provided this year were complimentary coffee and pastries each morning; a series of publisher-sponsored receptions each evening; an exclusive ABA member hospitality suite, providing a convenient meeting place for booksellers; a special ABA/BEA concierge table in the hotel lobby, where booksellers can pick up BEA badge-holders, copies of the BEA exhibitors' guide, updated information about convention events, and a welcome package with special surprises from ABA and publishers; special dedicated shuttle bus service between the hotel and convention center; and ARCs placed on pillows each night.