David Sandberg, owner of Porter Square Books in Cambridge, Massachusetts, was the recipient of a scholarship sponsored by Europa Editions and Other Press to the Turin International Book Fair. Here, Sandberg shares some of his experiences at the May 18–22 event in Torino, Italy. 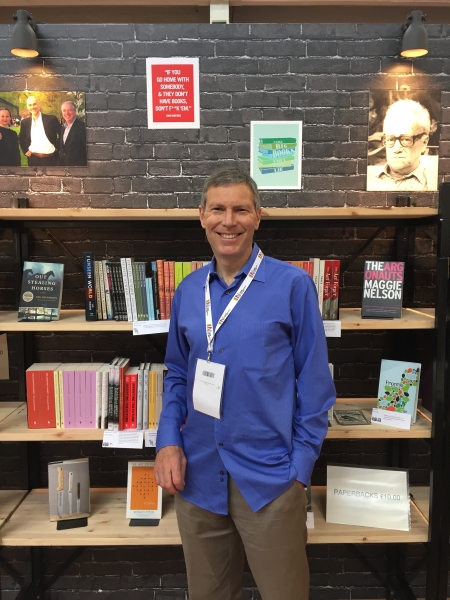 If there’s one way to make everyone you know jealous, it’s to tell them that you’re going to Italy for the Turin International Book Fair. I’ve been to Italy a lot and even know the area around Turin a little bit, but this was a completely different experience from what I’ve done before. Three of us — Jenn Witte from Skylight Books in L.A., Camilla Orr from Changing Hands in Phoenix, and I — were lucky enough to have been invited by Europa and Other Press to attend and participate in the fair: three or four days of panels, meetings, aperitivi (six o’clock prosecco and snacks), dinners, “Caffè Con” (a series of guest appearances at our booth where anyone was invited to come over and have a coffee — American coffee, from a drip coffeemaker, which was quite a curiosity and sometimes as big a draw as the guests themselves — with a sequence of interesting people), parties, bar visits, and general milling about the large and fascinating floor of the fair. A big highlight was that we got to stock and staff the “Indie Bookstore. The fair had agreed to give us space to display our own collection of books in English (each of the three of us chose a bunch of titles that we thought were representative of our stores and ourselves, together with Europa and Other Press titles) and that we got to be booksellers to the English-reading Italians who came to browse our wares. 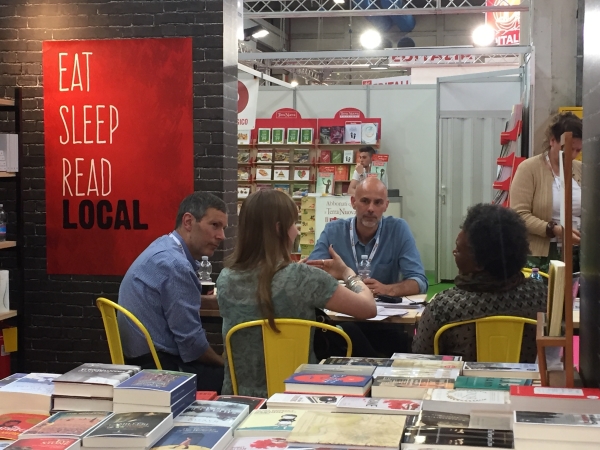 Turin is different from the American book fairs I’ve been to, BookExpo and Winter Institute. Unlike BookExpo, it’s essentially loads and loads of publishers taking the opportunity to sell their books directly to consumers. Booksellers aren’t really a part of this, and this is not about introducing new books and giving out ARCs and standing in line for authors to sign them. (It does have some aspect of rights negotiations, but that happens somewhere else and no one on the floor of the fair is particularly aware of it.) It’s about every Italian publisher having a booth where they display dozens or hundreds of titles and they’re all discounted 10 or 15 or 20 percent. People wander from booth to booth, shopping almost as though they would in a bookstore, with the publishers’ people essentially serving as booksellers and talking about their books. Schoolchildren are here by the droves — it seems like this is a popular field trip for schools in the area — and on the weekend days many families seemed to have made it a family outing.

And speaking of Winter Institute — well, the Italians seem to have decided that that’s a pretty good idea and for the first time this past February they held “Tribùk,” a gathering of booksellers intended to do the things Winter Institute does so well: educate and socialize. We met a few booksellers who went to this inaugural conference and they’re as excited about it as any U.S. bookseller is about Winter Institute. It has started small, but they hope over the years to make it into the type of national bookseller “must attend” that Winter Institute has become for us. One of the panels we were on was on this very topic — Winter Institute and Tribùk — and everyone there seemed very anxious to learn more about what it’s like to be a bookseller in the U.S., what Winter Institute is like, and how to make Tribùk valuable and useful to booksellers. 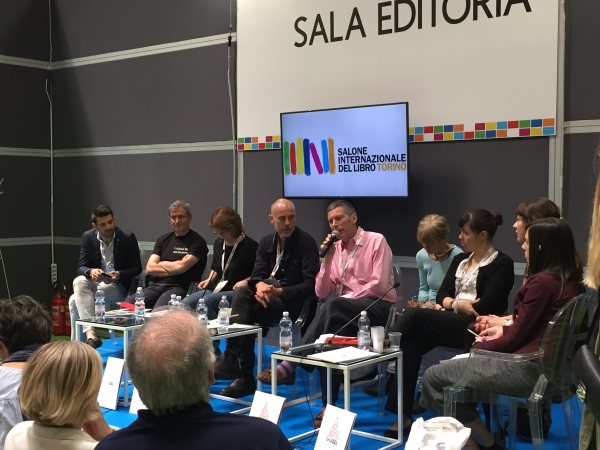 David Sandberg speaks on the panel titled “The Bookseller-Publisher Connection: A Comparison of Winter Institute and Tribùk.”

Despite its title, Turin is not particularly “international” in that just about all the books, other than the ones we sold at our Indie booth, are in Italian. I recognized lots of titles and even some covers (although it’s more common to have completely different covers than the American editions of the same books), but I don’t read Italian and so didn’t buy books here. One remarkable difference between this and the shows in the U.S. is the aesthetic. I’ve long noticed in traveling in Italy that a surprising number of retail shops are strikingly beautiful — the arrangement of goods is not simply utilitarian but is made to be attractive. It’s true in stores selling food or stationery or kitchen wares or just about anything. And it’s true of the booths at the fair. Books are not just in piles on tables or sideways on shelves; many booths have a sense of design and beauty that would be the envy of a merchandiser in a U.S. bookstore. So even browsing among books you can’t read is a visually pleasing experience.

The great delight of the fair was the people we got to meet. Michael Reynolds of Europa and Terrie Akers of Other Press, our hosts, could not have been more generous with their time, attention, and introductions. Michael, in particular, seemed to know everyone there, and welcomed us into every conversation (although I could only follow a small piece of the ones that were in Italian) with Italian, German, and French publishers, authors, editors, and booksellers. All the people at Edizione E/O, the wonderful Italian publisher that is Europa’s parent company and that introduced Elena Ferrante to the world, were as welcoming to us as though we’d worked with them for years, most especially its founders and owners Sandro and Sandra Ferri (sometimes referred to collectively as the “Sandri”) and their daughter, Eva. And the Italian readers who came by our booth and asked us for recommendations (“I want a book about love.” “I like American mysteries.” “Is there a book that can help me understand the election?”) were friendly, curious, and welcoming.

For me, a personal high point was getting to spend the better part of an hour with Claudia Rankine, who had come to Italy for the Venice Biennale and was stopping at Turin on her way back to the States. She was as extraordinary in person as she appears through her work, and I had to keep my starstruck-ness in check as we talked about politics, activism, literature, teaching, and the ever-present subject of Just What the Hell Is Going On in the U.S. 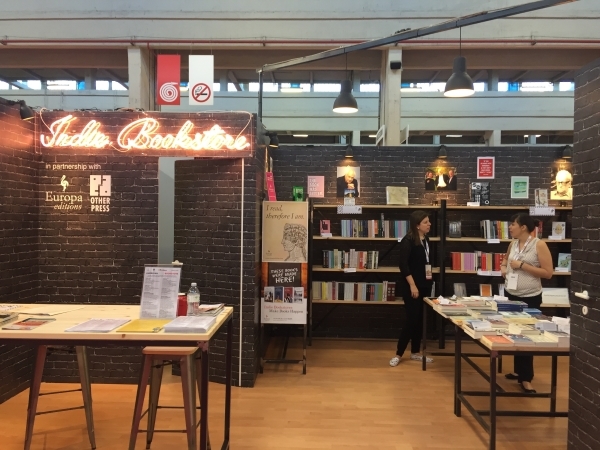 Speaking of which, there were two subjects that almost every Italian I met brought up in conversation: 1. How did this Trump thing happen in America? Didn’t you learn anything from Berlusconi? 2. Did you hear about Milan? “Milan” was the competing book fair, Tempo di Libri, that a number of the large publishers tried to start this year in Milan — rather than schlepping an hour and a half to Turin — and our friend Sandro Ferri from Edizione E/O was one of the leaders of the charge to keep the fair where it has been for 30 years. It became a matter of civic pride for Turin and an issue of principle for all the independent publishers who rallied behind Sandro, but no one really knew how it would turn out, and whether the Turin fair would survive. Well, the way it turned out was that the Milan fair (which had happened about a month before) was apparently a total bust, and the Turin fair was more successful than it had ever been. A huge victory for independence and local identity, and everyone at Turin was basking in that success.

One non-book-related thing I have to mention: the food and wine were spectacular — Turin is in the center of Piedmont, the origin of Italy’s slow food movement and the home of two of the greatest Italian wines, Barolo and Barbaresco, so dinner was normally a three-hour affair of antipasti, pasti, wines, cheeses, pastries, and everything in between. (And the wonderful food emporium Eataly began in Turin; the original store is a five-minute walk from the fair.) Turin is also home to some of the most regal architecture in Italy, and we marveled at the magnificence of breathtaking piazzas and half-mile-long colonnaded streets, side by side with the subtle beauty of luxuriant green balconies and picturesque doorways. 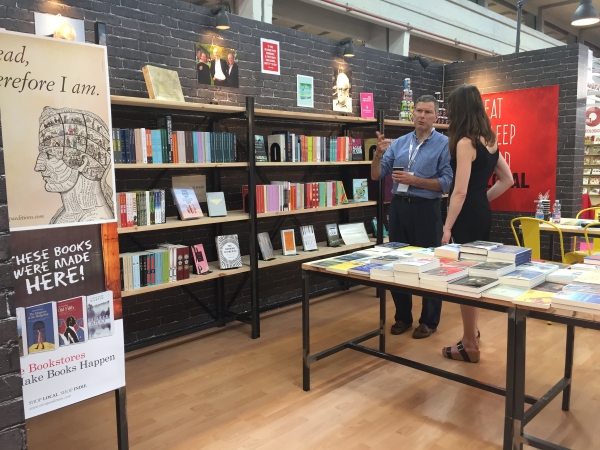 And finally, there’s international literature. Europa and Other Press brought us to this fair so we could immerse ourselves in the book culture of another place — with different authors, different publishers, different readers, and different booksellers — and then bring some of that culture back to our own bookstores. If the idea was to make me think more expansively about the role that books from other places should play in my life as a bookseller, it was spectacularly successful. I met a number of Europa and Edizione E/O authors whose books I now must read, considered new ways to introduce my customers to this literature, and thought a lot about bookselling as a way of expanding intellectual, if not physical, borders. I made connections with people that I hope to maintain, and extended invitations that I hope will be accepted. I learned a little about how to sell books to readers outside their first language and was forced to tailor my own book recommendations to readers who came from a different cultural and literary background than my own. Most importantly, I came home with a renewed sense that as much as we may immerse ourselves in Indie Next Lists, Indie Bestsellers, National Book Award winners, and our own staff picks, there is an almost inexhaustible body of literature that, while we may need to work a little harder to find, will expose us to a whole new set of ideas, viewpoints, styles, and experiences that we, and our customers, will be better off for having found.