On Wednesday evening, May 29, more than 300 booksellers, publishers, artists, authors, and other book industry professionals attended the Children’s Book Art Silent Auction to benefit the American Booksellers for Free Expression (ABFE) and Every Child a Reader at BookExpo 2019 in New York City. 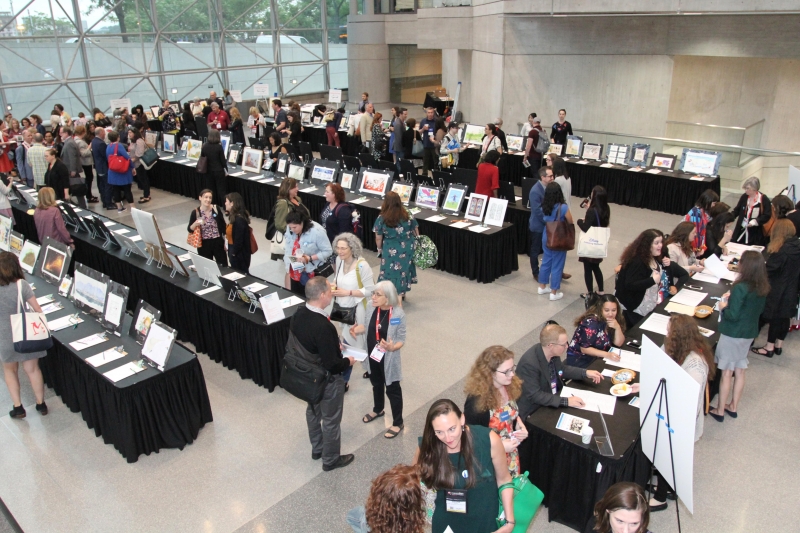 Booksellers, publishers, authors, and illustrators peruse the pieces at the 2019 Silent Art Auction to benefit ABFE and Every Child a Reader.

At the auction, attendees had the chance to bid on works of art from 116 children’s book illustrators, who donated original art and prints from published or forthcoming books. Members of the ABC Children’s Group at ABA were able to attend the auction for free using a special promotional access code.

Artists who created pieces for the auction, held in the Javits Convention Center’s South Concourse, included Sophie Blackall, Floyd Cooper, Pat Cummings, Brian Floca, Barbara McClintock, Daniel Minter, Lorraine Nam, Chris Raschka, Daria Peoples-Riley, Melissa Sweet, and Paul Zelinsky. In addition to the chance to bid on individual pieces, the event also included a raffle, and many of the donating artists who were present contributed a sketch to a large doodle board.

Illustrator and author Scott Magoon, who donated a print from his upcoming children’s picture book Linus the Little Yellow Pencil (Disney-Hyperion, June 4), told BTW, “I’m so proud to be a part of this event. It’s my first time donating to the auction, and I’m so amazed at the talent that is here. Being included in this group is incredible.”

This year’s auction also brought out attendees to honor and pay tribute to the late Ursula Nordstrom, former publisher and editor-in-chief of children’s books at Harper & Row from 1940-1973, whose initial stable of authors included Margaret Wise Brown, Arnold Lobel, and Maurice Sendak. Seven artists who contributed their own work to the auction also created original pieces honoring Nordstrom that were specially featured at the event, which was sponsored in part this year by HarperCollins Children’s Books.

As in past years, the event was coordinated by professor and children’s literature advocate Susannah Richards, with help from volunteers Karen Frazer and Beth Puffer. “Thank you to this year’s and past years’ talented and generous children’s book artists,” Richards said in a statement to BTW.

“We’re really pleased this year,” said Shaina Birkhead, associate executive director at the Children’s Book Council. “We’ve seen some really quality pieces; just the caliber of it all has been impressive.” 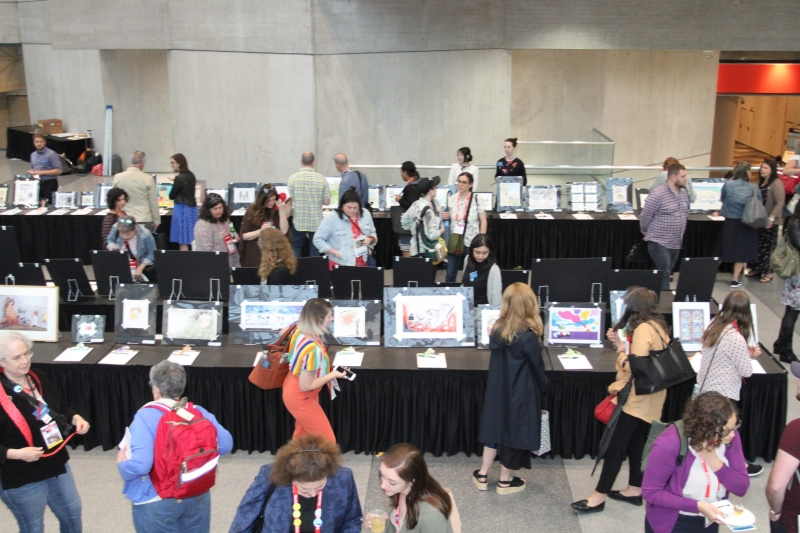 A total of 116 children's book artists donated pieces to this year's event.

Birkhead said 140 pieces were donated altogether this year, although some of them were held back to be shown at the ABC Children’s Institute in June. One thing that was different this year was that the winners of the Children’s and Teen Choice Book Awards were not announced as part of the event. Instead, the CBC has extended the voting period through June 2, with a special voting booth that will be featured at BookCon, Birkhead said.

The CBC’s Every Child a Reader division promotes reading via national programs such as the Children’s & Teen Choice Book Awards, Get Caught Reading, the National Ambassador for Young People’s Literature, and Children’s Book Week, which celebrated its 100th anniversary this year, while ABFE defends books that are censored by co-funding the Kids’ Right to Read Project and Banned Books Week.