A Look at Some Key Moments and Reactions to BEA 2004

From former President Bill Clinton's Keynote Address, to a lively trade show floor, to the celebration of the fifth birthday of Book Sense, to author events, and even to the city of Chicago itself, this year's BookExpo America (BEA) proved a crowd pleaser. Booksellers and publishers described this year's trade show at Chicago's McCormick Place Convention Center as an upbeat, busy event, allowing both to reconnect and to establish new relationships. Northern California Independent Booksellers Association Executive Director Hut Landon summed up the general sentiment, "The convention was terrific this year. I can't remember being at a show this busy and, more importantly, this upbeat for four days running. Both publishers and booksellers appeared to be optimistic and excited about books coming out this fall."

Roger D. Doeren, co-owner of Rainy Day Books in Fairway, Kansas, concurred. "It's been very upbeat, very positive," he said. "Morale was high, and there was a lot of enthusiasm, and that was consistent with authors, booksellers, and publishers. The general attitude was to build and maintain relationships. I was impressed with the sincerity, conviviality, and warmth."

Long before the scheduled 6:00 p.m. start of the Keynote Address on Thursday, June 3, BEA-goers, waiting for a chance to hear former President Bill Clinton speak, formed huge lines outside McCormick Place's Grand Ballroom. Clinton, whose memoir, My Life (Knopf), is set for publication on June 22, presented an address that was alternately funny and moving and that covered the writing process, his early reading experiences, and the Patriot Act, among other issues. While recognizing the complex political challenges facing the nation in its fight against terrorism, Clinton cautioned that "it will take us a while to get the right balance on how we are going to deal with this," but he also underscored that "we need to bend over backwards to protect" free speech. "This thing about the Patriot Act and the books, you should oppose anything you don't like.... In this case, I think you're right [regarding 215]," Clinton said. "The government hasn't made a case for it yet."

For Doeren, the Clinton address was a particularly notable highlight. After the talk, he approached Clinton, shook his hand, and said, "It's my 53rd birthday, and my wish is that you would do a book signing at Rainy Day Books. I would like to help you have the mother and father of all book signings." Doeren told the former President that Rainy Day had hosted his wife, along with Al Gore, Tipper Gore, and Madeleine Albright on separate occasions.

Celebrations of Bookselling and Book Sense

Later that same day, at ABA's Celebration of Bookselling, which was hosted by Jane Pauley and sponsored by The Atlantic Monthly, the winners of the 2004 Book Sense Book of the Year Awards were announced. (For a list of the winners, click here.) In addition, for the first time, the Celebration included the presentations of the Publishers Weekly Bookseller of the Year and the PW Sales Rep of the Year awards. In an emotional presentation, Mary McCarthy, general manager of the Harry W. Schwartz Bookshops, accepted the Bookseller of the Year Award on behalf of A. David Schwartz, who died on Monday, June 7. (To read more about A. David Schwartz, click here.)

(For more about the Lunch and Celebration, read BTW's "Day 2" report from the show, by clicking here.)

The celebration of the fifth birthday of Book Sense was a major theme throughout the show. On Saturday, hundreds of booksellers, publishers, and other industry professionals gathered for the Book Sense Birthday Bash at the Ingram Booth on the trade show floor to join the Book Sense team and ABA staff for some congratulatory cake and champagne. Jim Chandler, chief commercial officer of Ingram Book Group, welcomed booksellers to the birthday celebration and introduced Avin Mark Domnitz, ABA CEO. Domnitz talked about how the five-year-old national marketing campaign has "introduced the wonderful attributes of Book Sense to customers and community.'' He then invited the crowd to "enjoy some cake, stick around, and maybe even watch [the Belmont Stakes]" on a plasma screen TV set up in the booth. The roar and disappointed moans from the trade show floor echoed throughout McCormick Place as people watched the odds-on favorite, Smarty Jones, lose the race and fail in his bid to win the Triple Crown.

A number of other Book Sense Publisher Partners joined in the birthday celebration by sponsoring special events on the trade show floor. (To read more about how publishers participated, click here.)

Many booksellers took advantage of the panoply of ABA-hosted educational programs. Father and daughter team, Dick and Suzanna Hermans of Oblong Books & Music in Millerton, New York (which won honorable mention for the Lucile Micheels Pannell award), said that they found the session "Identify Competition & Self-Evaluation: A Method to Conduct the Analysis" presented by Domnitz helpful. The Hermans tailored the session, which addressed comparing bookstores' statistics to address competitive questions, to fit their needs. "Avin gave nice criteria to compare with other stores. But we used it to compare our two stores with each other," said Dick Hermans. "Now we're ready to rank them and ... think about them in the terms that Avin discussed, like ambience, selection, service, and price."

For Meredith Warner Barham, operations manager at Changing Hands in Tempe, Arizona, the "Book Sense Gift Card Users Group," moderated by ABA Marketing Director Jill Perlstein, was invaluable. "The Givex seminar was particularly helpful," said Warner Barham. She added, "It was a really smart meeting for those of us who use Givex. Everyone agreed that gift card sales have quadrupled, and we want to make [the process] as efficient as possible. Givex was very helpful and sympathetic."

The Marketing Plenary session, which featured the "father" of Guerrilla Marketing, Jay Conrad Levinson, was also a BEA standout. Sharon Allard of Off the Beaten Path in Steamboat Springs, Colorado, told BTW, "The approach to marketing has changed over the years. It's all about reinvention now, not just doing the same thing. The [Marketing Plenary] session reinforced something we've been doing as a bookstore."

Allard said that in effort to stay dynamic, Off the Beaten Path, a 2,500-square foot store, will be installing a wine bar. "We're excited about it. We're changing the way people look at bookstores."

A Look at New Titles

Of course, what every bookseller wanted to talk about was this fall's new titles. From Ariel Books in New Paltz, Susan Avery reported, "Everyone felt that the fall list is stronger than it's been in a while." Many booksellers mentioned what they had read while on route from Chicago. Avery's choice for the trip back to New York was Gish Jen's The Love Wife (Knopf). "I read half of it on the plane and thoroughly enjoyed it." Meanwhile flying back to Arizona, Gayle Shanks read Mark Spragg's An Unfinished Life (Knopf).

Other potential future Book Sense picks were The Divine Husband by Francisco Goldman (Atlantic Monthly Press), about which Avery said, "I have not read a book that good in many, many years. I know booksellers will love it."

Shanks had a list of books she was excited to share: Alexander McCall Smith's first installment of his new series, The Sunday Philosophy Club (Pantheon); Dave King's The Ha Ha (Little, Brown); M. Allen Cunningham's The Green Age of Asher Witherow (Unbridled); and Malcolm Gladwell's Blink: The Power of Thinking Without Thinking (Little Brown), which not only made Shanks' list, but many other booksellers, including that of Vladimir Verano of Elliott Bay Book Company in Seattle.

Verano also added a book mentioned at the Editor's Book Buzz: Penguin Press' We Are All the Same, a nonfiction title by Jim Wooten about the life of Nkosi Johnson, a young spokesman for AIDS in Africa who died at the age of 12. Verano noted, "If [We Are All the Same] affects booksellers as much as it did the editor, this one will really be handsold."

What Publishers Had to Say 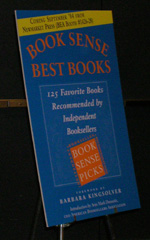 Publishers also uniformly spoke of a successful and active convention. Newmarket Press Publicity Director Harry Burton said that one title that generated a great amount of interest was Book Sense Best Books, Volume 1: 125 Favorite Books Recommended by Independent Booksellers, which will be published in September 2004 to mark the fifth anniversary of the Book Sense program. Burton told BTW, "We had five dummy copies of Book Sense Best Books and by 1:00 p.m. on Friday they were gone. They weren't even copies of the book, just dummies!" Burton said there were three primary groups who visited the booth to place orders for the upcoming title. "Obviously independent booksellers came by," said Burton. "Also librarians, there was lots of librarian interest. They're always looking for books to recommend. And foreign agents. They want to check the list and see if the rights are available in their country."

At the Trafalgar Square booth, Director of Marketing and Promotion Deborah Sloan reported that the show had gone "really well." She added, "Even when you think you know everyone in the business, there's always someone new, or some new specialty store. There's always some new lead." Trafalgar Square had printed wine labels for the Book Sense Birthday Bash and Sloan said of the program, "We love Book Sense. We do a lot of advance access, and there's no question it makes a difference. We have booksellers come by and say 'Thanks for supporting Book Sense. We got something in the White Box, and here's our order.'"

Margaret Coffee, director of field sales, Scholastic, in concert with fellow publishers, voiced kudos about this year's BEA. "There was a lot of traffic and a lot of interest. It hasn't been in Chicago for a few years. There were a lot of independent booksellers visiting us from the area. We also saw a big contingent from California." Coffee noted that Scholastic has a "strong fiction list." Some titles that generated buzz were Blue Balliett's Chasing Vermeer, Jenny Nemo's Charlie Bone series, and P.B. Kerr's Children of the Lamp.

St. Martin's Press, also busy, had well-attended signings by authors, including Augusten Burroughs. Publicity Director Matthew Baldacci said he'd had many successful meetings with accounts, the majority of which were independents. He also mentioned some of the hot St. Martin's fall titles. "We gave away a ton of galleys and got some people interested in a first novel: a 900-page brick called Shantaram by Gregory David Roberts." Baldacci also was happy with the location of BEA. "I was thrilled with Chicago, everything is in one place on the show floor. I also heard a lot of new stores have opened. That's always great." --By Karen Schechner with reporting by Dan Cullen, David Grogan, and Rosemary Hawkins