How Three Booksellers Are Using IndieBound to Connect With Local Businesses

Key to the IndieBound movement is the involvement of not only indie bookstores, but all types of indie retailers, local business alliances, and community-minded citizens. So, taking that to heart, R.J. Julia Booksellers in Madison, Connecticut; Chapter One Book Store in Hamilton, Montana; and Anderson's Bookshop in Naperville, Illinois, recently reached out to other local businesses in their respective communities, each in different ways, but all with the common goal of creating a groundswell of community support for the Local First movement.

About a month ago, Karen Corvello and Gary Rogers of R.J. Julia brought some IndieBound materials to a Chamber of Commerce meeting in Madison, Connecticut. The purpose of the meeting was to discuss the town's Late Night Shopping holiday promotion that has downtown stores staying open until 8:00 p.m. every Thursday night leading up to Christmas. "I printed out the 'Love Your Local' and the 'Here's What You Just Did' posters, and here, in this conservative Connecticut town, they went nuts over them," Corvello reported.

After the Chamber meeting, things kind of steamrolled. The "Love Your Local" posters were distributed to each store and are now plastered in each storefront window, Corvello noted. Fifteen "Love Your Local" lawn signs have been produced, and the Chamber placed a half-page "Love Your Local" ad in the November 13 edition of The Source, Madison's local newspaper. A local business owner wrote an op-ed for The Source about the importance of keeping business local, and R.J. Julia owner Roxanne Coady wrote a similar letter for the store newsletter, which will also be distributed to Chamber members.

"It seems that businesses are responding to [the IndieBound message], which is pretty exciting," Corvello noted. "I love the look, and it's a great program." She added that the IndieBound materials work well with the Chamber's holiday promotion to encourage people to come to downtown Madison to shop. "Businesses are thrilled," she said. "I've had four or five people come up to me saying thank you so much. They just needed a focus point, and [IndieBound] just really spurred people. They find it energizing.... It's such a nice way to educate people about the importance of shopping local." 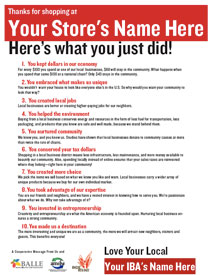 In Montana, former ABA President Russ Lawrence, the co-owner of Chapter One, reached out to the largest employers in Hamilton's retail area to spread the IndieBound message. In all, he met with Hamilton's local school superintendent; the public affairs officer at a government research facility, which employs 135 people; the CEO of the local hospital, which represents 480 local employees; and a management team at a local biotech production facility, which has a staff of 240.

Lawrence told BTW that the outreach is something he'd been thinking about doing for several months. "I put together a packet of information for each business," he said. "I used one of the customizable 'Here's What You Just Did' posters and ... worked up a lot of other things, which were synthesized from IndieBound and the American Independent Business Alliance, and then customized it to each business."

For instance, in the packet for the schools, Lawrence pointed out that Chapter One offers schools a discount and reminded them that "we're taxpayers, too." He added that he made the calls to the companies two weeks ago, and "we immediately got orders for technical books from [the lab], and orders from the other [research facility]."

However, the overall aim of Lawrence's outreach efforts was to spread the Local First message to both the companies and to their employees, something that appears to have been successful. "A lot of these places do a lot of hiring ... and I wanted to see if a Local First message could be part of their orientation. And, in some cases, I got a 'Yeah, sure.' This is a way to reach out to people coming into the community." Some businesses put materials on their bulletin boards, and some in their newsletter outreach to employees.

The IndieBound materials played a big role in driving home the Local First message to the people he met with, Lawrence reported. "You could literally see it in their eyes as they got it -- why it matters, the power of the Local First message," he explained. "To me, the most powerful part of it is, is that everyone is part of the community in some way.... So everyone is standing to benefit from it. And IndieBound makes clear the range of ways it benefits the entire community."

In early October, Anderson's Bookshop sent out an e-mail to local businesses inviting them all to "discover their shared strength" at a meeting that focused on the IndieBound message. The e-mail, which had an IndieBound banner as its header, urged indie retailers "To Come Join the Revolution. Come Join the Celebration. You're One of Us!" and noted: "We're IndieBound Heroes -- the independently owned, community businesses. We're the druggist, the grocer, the bookseller, the restaurant owner, and the florist.... We're independent business people, and, as such the inspiration for IndieBound." The e-mail also referred business owners to the IndieBound.org website for more information.

The end result of the initial Anderson's outreach is IndieBound Naperville, a Local First group that has 50 members. "We sent out the initial e-mail and about 15 businesses came," said Becky Anderson of Anderson's Bookshop. "We had three more meetings, and each time, different businesses turned up, so the word was getting around."

At each meeting, Anderson used IndieBound materials such as the "Here's What You Just Did" poster, which she personalized with each business' name. "We had it there for them to pick up," she explained. "And they thought that was really cool. We put some time into this, but it was well worth it."