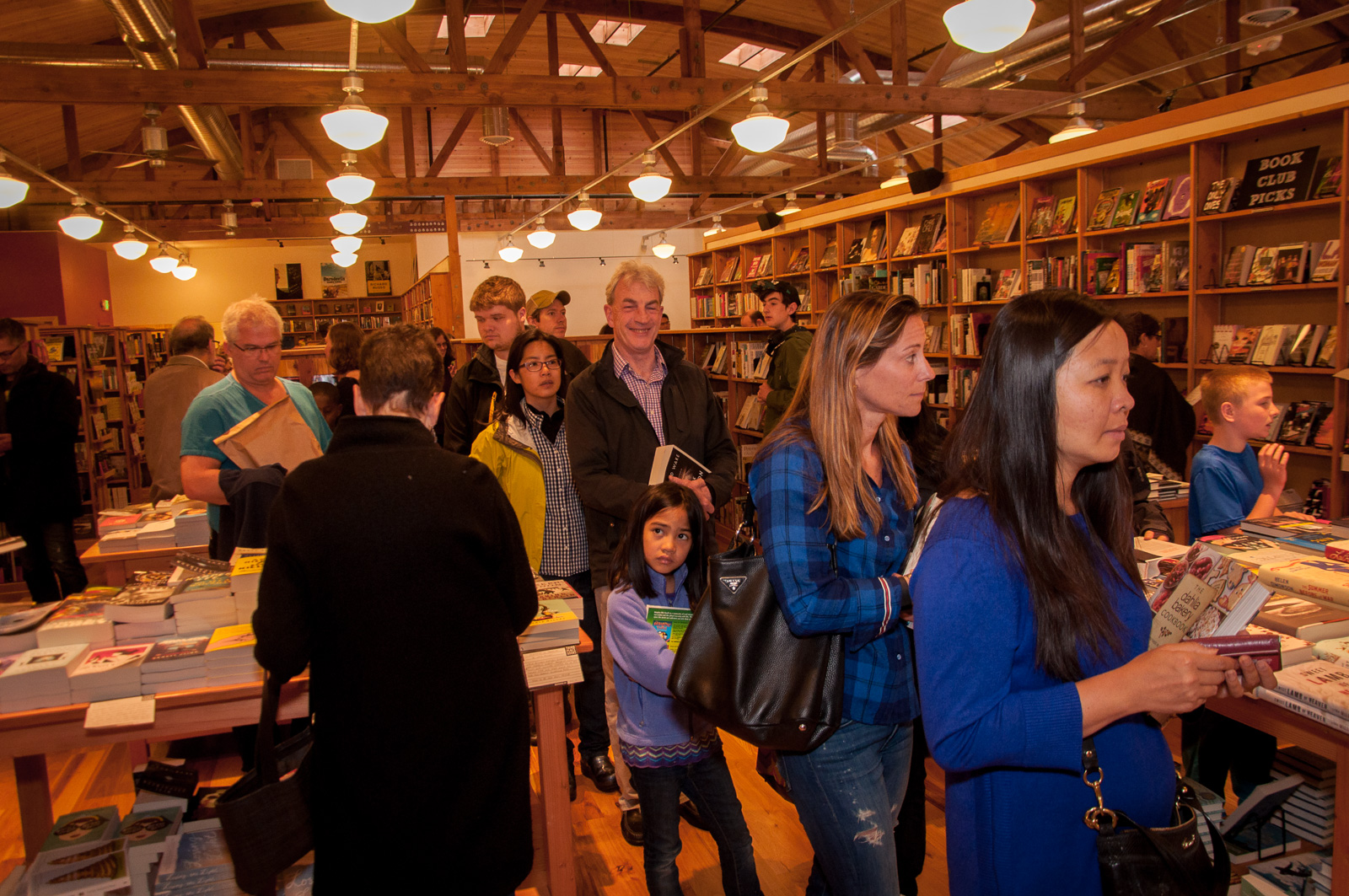 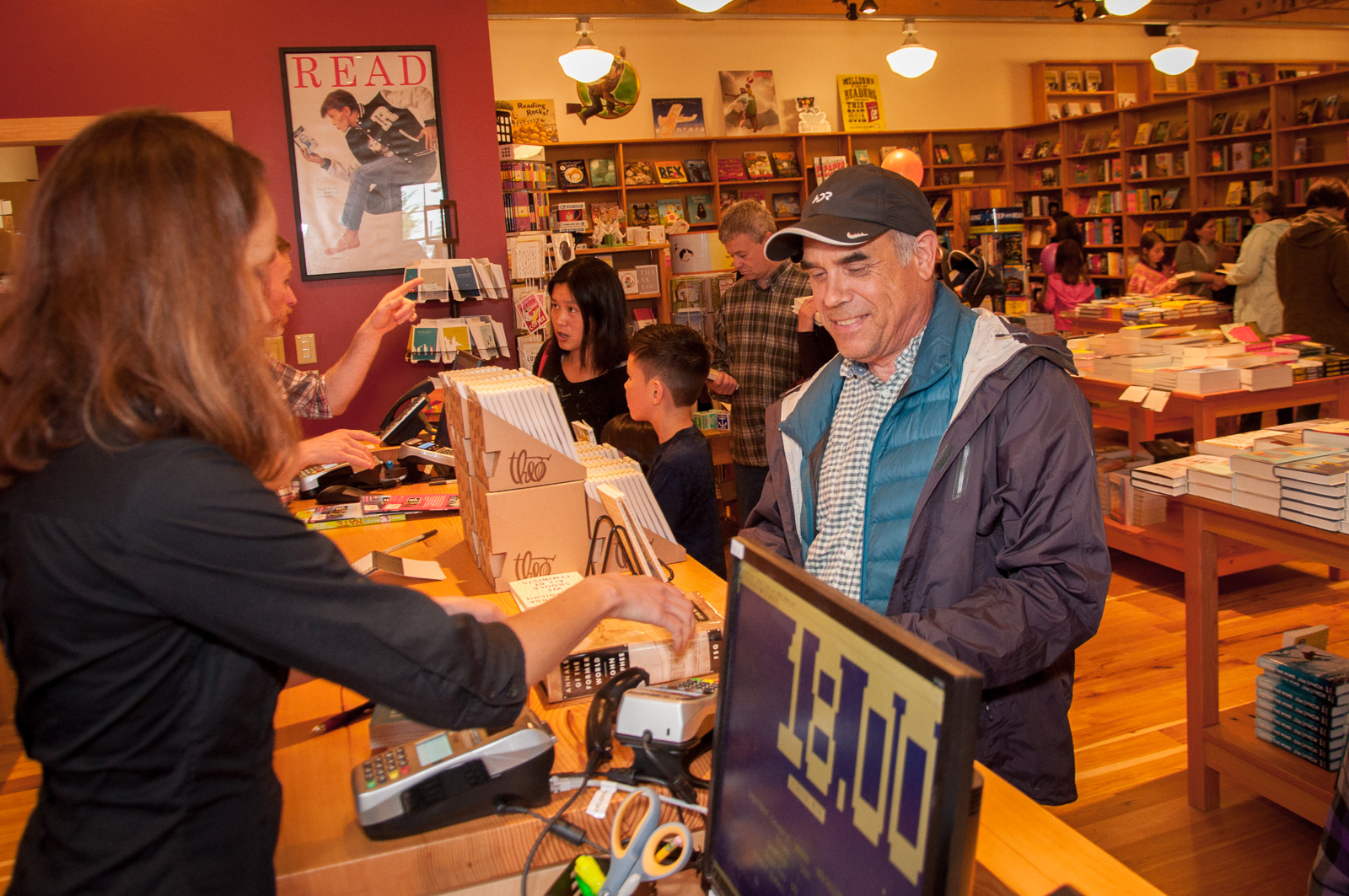 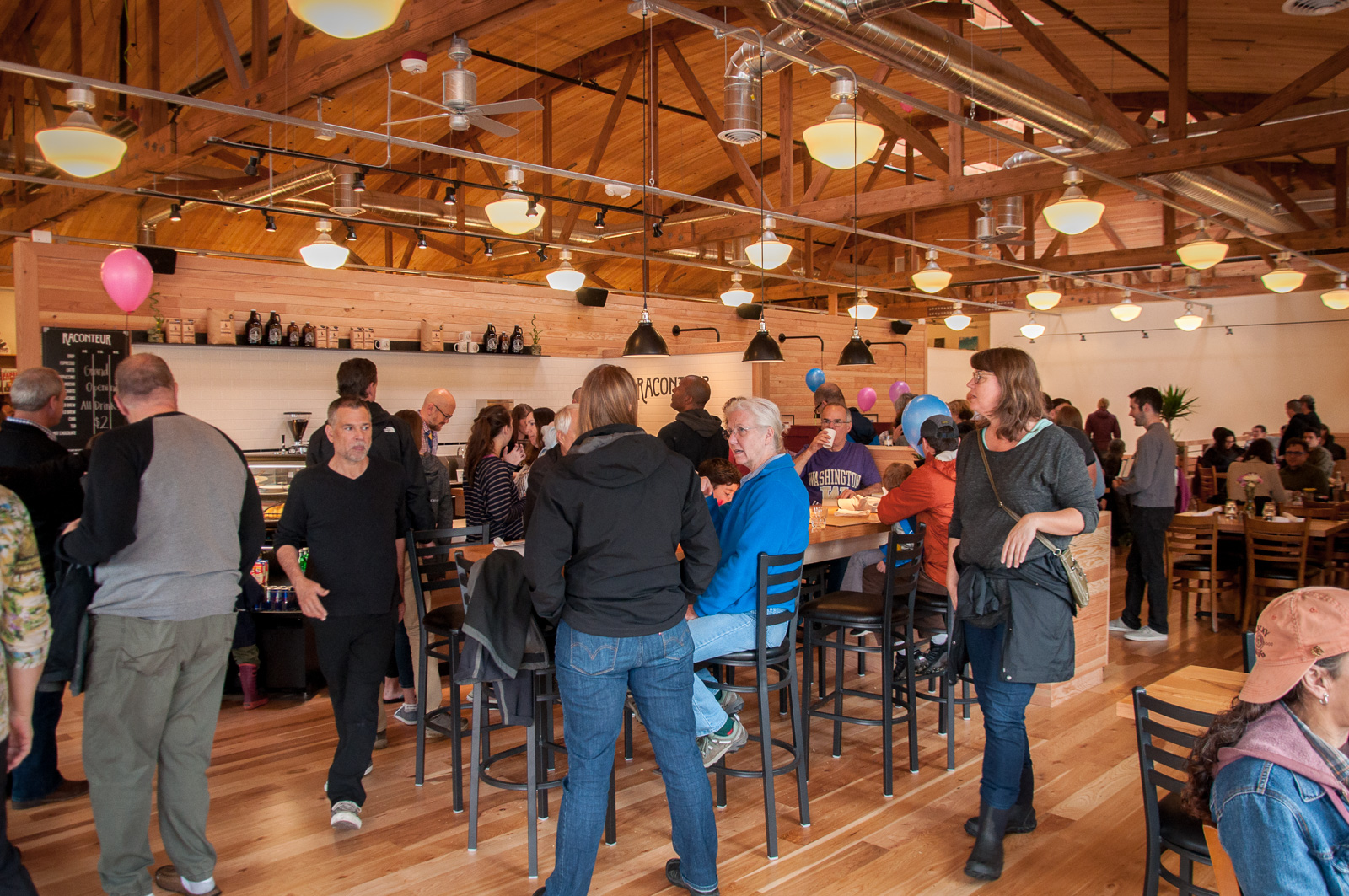 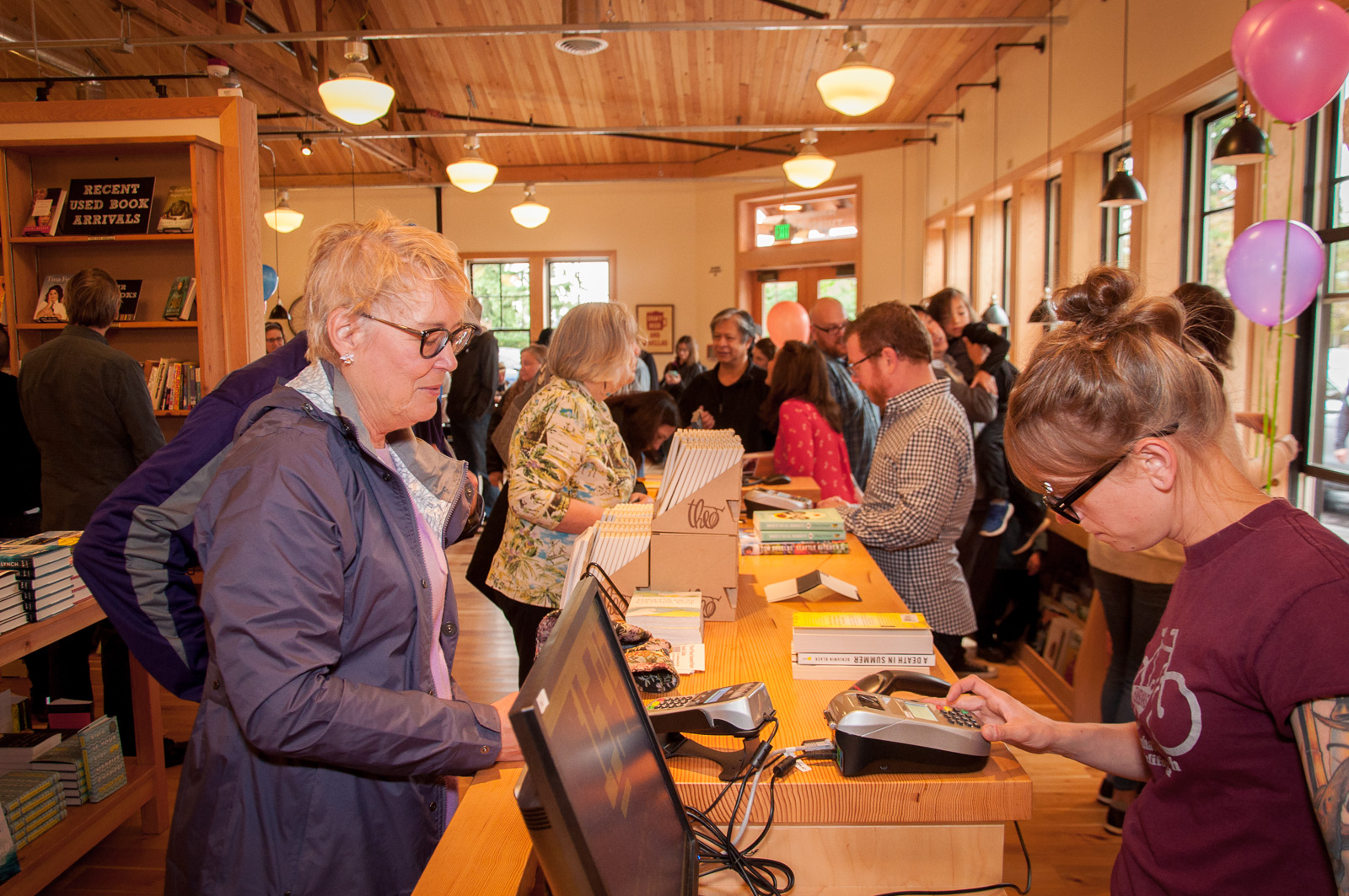 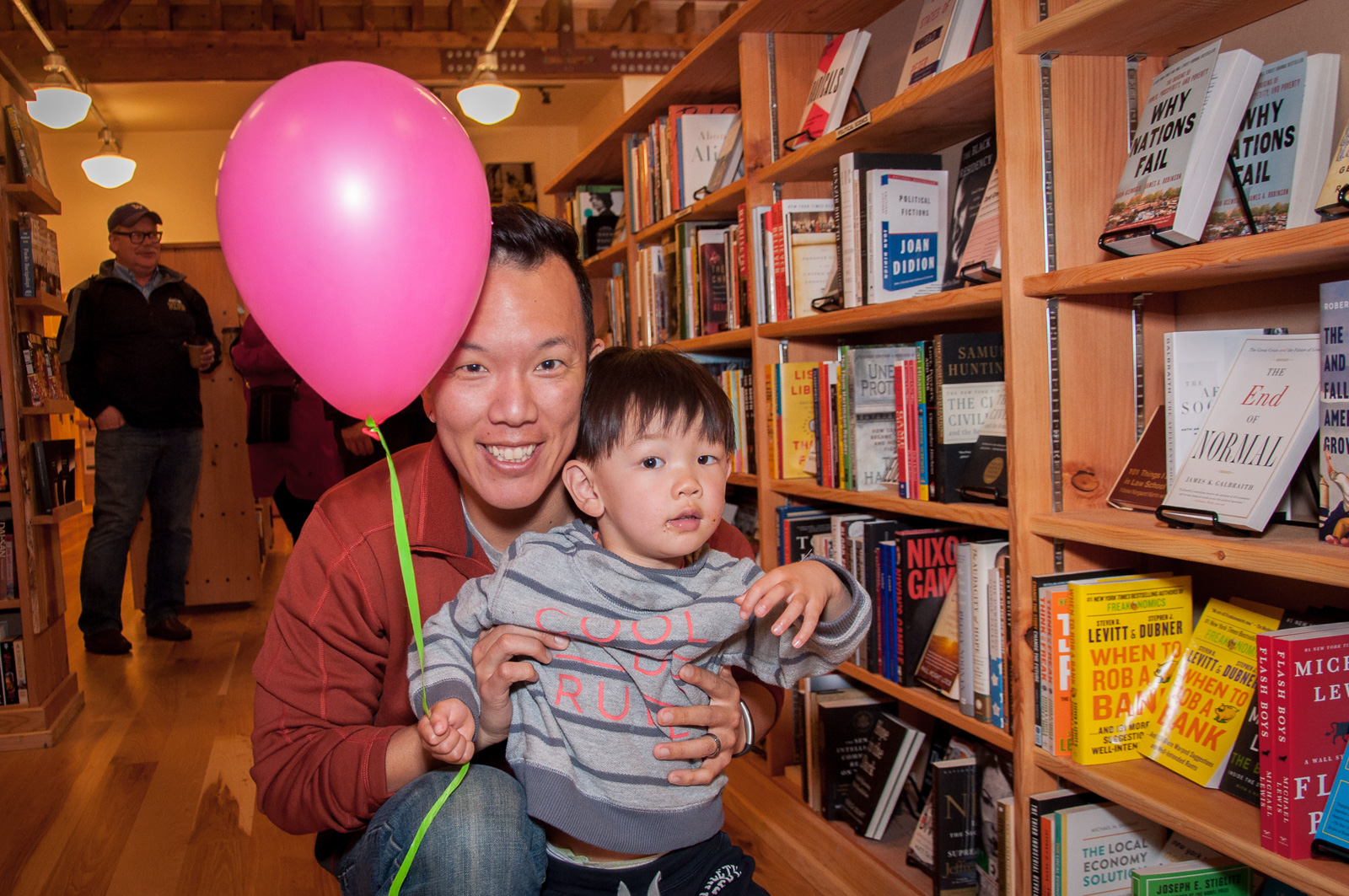 Thousands of people showed up to celebrate the grand opening of Third Place Books in Seattle, Washington’s Seward Park neighborhood on Saturday, May 21. Throughout the day, the new bookstore/restaurant was filled to bursting with people from the neighborhood as well as fans of Third Place’s other two stores, in Ravenna and Lake Forest Park.

“It was great! It was beyond our expectations,” said Third Place managing partner Robert Sindelar. “We had people waiting outside when we opened and it just didn’t stop all day. We probably did in a single day the equivalent of about two-thirds to three-quarters of what we would have expected to do for a week’s worth of business.”

“It was amazing. People just completely geeked out,” said Sindelar.

The new 7,000-square-foot general interest bookstore features 15,000 to 20,000 new and used titles on two floors, as well as a used-book buying counter, an event/reading space, and a separate children’s department.

Third Place Books has partnered with Raconteur, a restaurant owned by the proprietors of the local company Flying Squirrel Pizza, to offer breakfast, lunch, and dinner as well as an espresso counter and full bar. On Saturday, the restaurant had lines out the door all day, said Sindelar.

The Seward Park store is located in a building that for the past 20 years was home to the Puget Consumers Co-op, a grocery store, which recently moved 10 blocks down the road to gain additional square footage.

“Obviously,  the immediate community was very sad to see them go,” said Sindelar, “but they seemed to have recovered from their grief upon seeing inside our new business.”

The Seward Park location is modeled on Third Place’s Ravenna store, which, like the Lake Forest Park store, also features dining options. The size of the Seward Park and Ravenna bookstores is roughly the same, but at the Ravenna store there is less of an open floor plan.

“We learned a lot from the Ravenna store and what it does really well, but we felt that if we could start over we would want to enhance the way the businesses interact together,” Sindelar said. “Part of our work on this store was to fulfill that vision of creating more of a flow from restaurant to bookstore.”

Now that the store is open, the work to gauge the interests and needs of the local reading community begins. Sindelar said that adjusting the title selection while getting a better feel for the Seward Park community will be fun.

“It’s actually a really interesting part of the process,” he said.