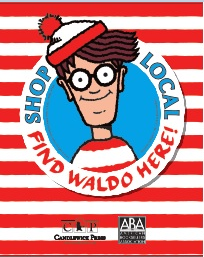 For the third year in a row, the American Booksellers Association is partnering with Candlewick Press to bring the Find Waldo Local campaign to hundreds of communities nationwide. Pre-registration for this year’s event begins next Wednesday, January 22. Booksellers will be able to sign up online at indiebound.org/findwaldolocal.

Taking place in July, the month-long campaign hosted by ABA member stores features community-wide scavenger hunts for the ever-elusive, red-and-white striped picture book character at dozens of local businesses. Find Waldo Local 2014 will offer new features and improvements, including the search for a new character — Woof, Waldo’s most loyal companion. Waldo spotters will be eligible for new prizes throughout the month, which will culminate in a grand closing ceremony at participating bookstores.

“ABA is glad to partner again with Candlewick Press on their third year of Find Waldo Local and applauds Candlewick for this creative promotion,” said ABA Program Officer Joy Dallanegra-Sanger. “Stores who held scavenger hunts established stronger relationships with their local businesses, brought smiles to thousands of children, and sold lots of books. We encourage bookstores to participate again in 2014!”

In a survey of last year’s Find Waldo Local participants, 90 percent of stores said that the event was successful and more than 80 percent said they would run it again. In view of such positive feedback, Elise Supovitz, executive director of independent retail at Candlewick, asked, “How could we say ‘no’ to a repeat performance?”

Booksellers must pre-register by March 15; participation in Find Waldo Local is capped at 250 stores. Full details and requirements for host bookstores can be found in the campaign brochure, available for download here.