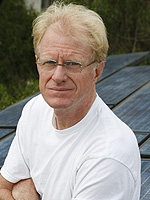 There is no question: environmentalism is in. It's cool to be green these days, especially in Hollywood. But, as is so often the case in la-la land, not everything you see is real. While any number of celebrities are very good at talking the green talk, many are not so adept at walking the walk -- unless it's to their idling private jets.

Ed Begley, Jr., on the other hand, is different. He not only talks the talk, he definitely walks the walk. That's because, for Begley, being green is neither a fashion statement nor a fad, it's a way of life, something he's been doing for the past three decades.

In fact, Begley has become as well known for his environmental activism as for his acting career. Begley is the co-star of the hit HGTV series Living With Ed, a look at the day-to-day realities of "living green," and author of Living Like Ed: A Guide to the Eco-Friendly Life (Clarkson Potter). He has been chairman of the Environmental Media Association and the Santa Monica Mountains Conservancy and serves on the boards of numerous organizations including the Thoreau Institute, the Earth Communications Office, Tree People, and Friends of the Earth. His work has garnered awards from environmental groups including the California League of Conservation Voters, the Natural Resources Defense Council, the Coalition for Clean Air, Heal the Bay, the Santa Monica Baykeeper, and the Southern California Gas Company.

Begley will be the morning's keynote speaker at the American Booksellers Association's Day of Education on Thursday, May 29. In a change of schedule, the keynote will begin at 8:30 a.m. on Thursday in the Renaissance Hollywood's Grand Ballroom, where coffee will be served, not breakfast as previously announced. In anticipation of his keynote address, BTW recently interviewed Begley via e-mail.

Bookselling This Week (BTW): The environmental movement has gained tremendous momentum over the past few years, but you've been an environmentalist for three decades now. What motivated you to "go green," before so many others? During those three decades, what has surprised you most about the movement?

Ed Begley, Jr.: I started in 1970, which is when we held the first Earth Day. I had had a belly full of the choking smog in Los Angeles in the 1950s and '60s. I had been a cub scout and a boy scout and had developed a real love of nature and the outdoors. My father was the son of Irish immigrants and had grown up during the Great Depression. He was a conservative who liked to conserve. He turned the lights off, saved tin foil and string -- he was an environmentalist but didn't call himself that. So, because of all these influences, I decided to do something. I began recycling in 1970, composting in 1970 and bought my first electric car in 1970. I guess what has surprised me the most is that for years people seemed to be overwhelmed by the "size of the problem" ... now, people seem to have acknowledged the problem but are overwhelmed by the "size of the solution." I think the solutions are fairly easy, and I'm here to help.

BTW: Climate change is on everyone's minds these days. In regards to reducing one's carbon footprint, most people think about driving less, using fluorescent light bulbs, ... but are there perhaps less-publicized ways that we can reduce our output of CO2?

Ed Begley, Jr.: Well, I try to focus on the things that are cheap and easy.... You've mentioned two -- get out of your car and use CFLs. Those are both low hanging fruit. Use an energy saving thermostat, insulate your home with more insulation and weather stripping, energy star appliances, recycling, composting, home gardening, unplug phantom power-drawing electronics, low-flow shower heads, high efficiency toilets, non-VOC cleaning products and paints -- these are all things people can do relatively cheaply today.

BTW: Many booksellers are at the forefront of "Buy Local First" movements, which strive to ensure the continued existence of locally owned, independent businesses in towns and cities across the country. There have been a number of studies that show local independent businesses return more financially to their communities through things like their hiring and buying practices and support of local organizations. What do you see as the environmental benefits to shopping locally?

Ed Begley, Jr.: The things you say here about local businesses are very true, and I have supported these beliefs for years. Environmentally, I can think of three big reasons right away: one, local businesses tend to source their products/services locally, cutting down on fuel/transport. Two, small business generally have small infrastructures, so buildings, fleets, etc., don't have to be operated and supported. And third, when you shop locally, you reduce your travel, again saving fuel/transport. I walk to the store, walk to the post office -- you can't get a much lower carbon footprint than that.

BTW: The book industry is not known for being the greenest ... and yet it's through books like Living Like Ed that the eco-friendly message is being spread. Do you have any thoughts on this conundrum? And do you have a message for the book industry on how to be more environmentally friendly?

Ed Begley, Jr.: Books are too important to our society to just walk away from. I can't imagine a world without books. What we want to do is simply try and make the manufacturing and distribution of books as environmentally friendly and energy efficient a process as we can. The use of post-consumer recycled materials and non-toxic, soy-based inks are very important and make a huge impact.

BTW: Could you give us a short preview of some of the things you will be talking about as the keynote speaker at ABA's Day of Education?

Ed Begley, Jr.: Well, of course I'll talk about my own personal journey since 1970, and the fact that not only have I done good things for the environment, but those things have also put a lot of dough back in my pocket! I'd like to encourage independent book retailers to look towards green initiatives as good for their business. And, I'd like to thank independent book retailers for their support of my work! --Interviewed by David Grogan