Three million gallons of contaminated water from the Gold King Mine were accidentally released into the Animas River in southwestern Colorado by Environmental Protection Agency workers on Wednesday, August 5. The following evening, the plume appeared in Durango, Colorado, where the river snakes through the entirety of the city, running alongside the main highway for miles. 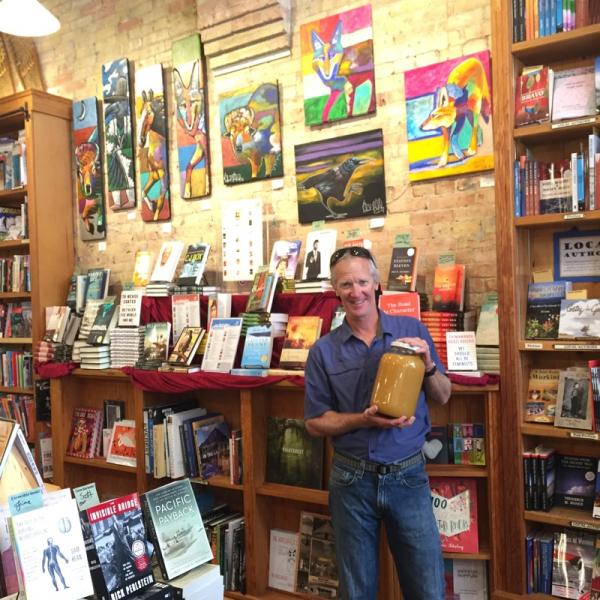 At Maria’s Bookshop, co-owner Peter Schertz, who swept up a sample of the bright orange water that Friday morning, told BTW: “Our usual natural disasters are forest fires, avalanches, and flooding. This manmade disaster is difficult for us to put in perspective.”

The release occurred when an EPA safety team looking to install a drainage pipe breached a dam with heavy machinery, and water contaminated with iron, manganese, zinc, and copper spilled into the Cement Creek, which leads to the Animas River.

In response to the spill, waterways used for boating and fishing have been shut down, and recreationalists have been warned to stay away from the water. Businesses and homes in Durango have been asked to reduce water consumption, as the river serves as the town’s secondary water source after the Florida River.

“The rafting industry came to an immediate halt at the height of their season, and the agricultural impact is large, as much of it relies on irrigation that comes directly from the Animas River,” said Schertz, adding that there is overwhelming concern over how the disaster will play out environmentally and economically.

“We’ve learned at Maria’s Bookshop how intertwined the economic influences in our community are. Twelve years ago we had large wildfires that impacted every part of the community. Nobody was unaffected. I think this incident will be similar.”

Tourists are still frequenting Durango, and many are still coming into the bookstore, at least for now, he said. With plenty of hiking and biking options in the region, the shop is well prepared with a stock of guidebooks and maps to facilitate trips by land.

Maria’s is also preparing a window display to highlight books on Western rivers, mining in the West, and environmentalism, which will be featured alongside a copy of the High Country News issue with the article “When Our River Turned Orange” and the gallon jar of river water that Schertz collected.

With the water in Durango noticeably clearer a week after the spill, “there’s a feeling of hope that it’s returning to normal,” Schertz said. But towns downstream that use the river as a primary water source are struggling. “The effect on the fisheries, wildlife, and the community in general is concerning everyone,” he said.

“The river is far more than a tourist attraction; it’s the lifeblood of the Southwest. I think, in the long run, people are realizing how much we are all in this together because that river is flowing through everyone’s community.”

To his friends in the book industry, Schertz said, “Andrea and I appreciate all the indie book colleagues who have reached out to us in concern for our well-being. This is a resilient community that knows how to pull together; we’ll get through it. I’m hopeful the long-term net impact is a positive one.”