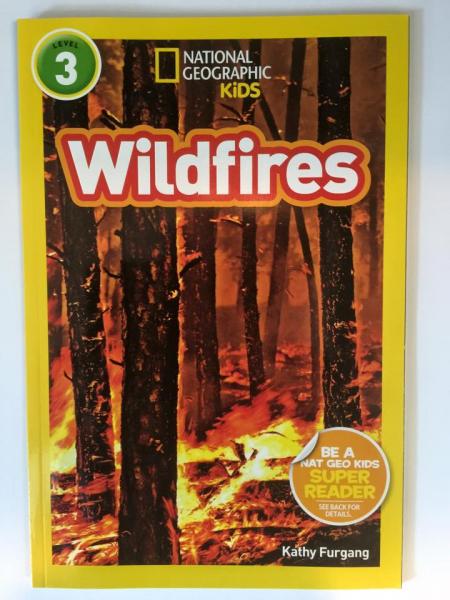 Riverwalk Books is giving away copies of the National Geographic Kids' "Wildfires" issue to help children deal with the ongoing disaster.

Evacuations of entire towns have been most prevalent in Washington, where separate wildfires have merged and become the largest complex fire in the state’s history.

One evacuated Washington town is Chelan, the location of Riverwalk Books. In nearby Twisp, three of the thousand firefighters battling a blaze near Lake Chelan died and 85 structures were destroyed.

Last week, Riverwalk owner Libby Manthey reported that area residents had been permitted to return to their homes on Monday, July 17, after being evacuated for three days. The situation has been moment-to-moment, she added, but is under control now, though the fire continues to burn three miles away.

About the evacuation’s impact on Riverwalk, Manthey said, “Saturday, August 15, and Sunday, August 16, coincided with the busiest weekend of the summer season — it’s like losing the two days before Christmas. But the store will be fine, and we will be fine. We’re just feeling very sad over the loss of the three firefighters and for so many who lost their homes and their livelihoods.”

As the disaster continues, Riverwalk has served as a positive force in the community through an effort to help local children process the unfolding events. In an August 25 post on Facebook, the store announced it would be giving away free copies of National Geographic Kids’ “Wildfires” issue to families with young children while supplies last.

“As adults, we can process somewhat the information around us,” the Riverwalk posting reads. “Children are often forgotten in our conversations. This is our way of providing a tool to understanding for our youngest community members.”

Winthrop, Washington, another evacuated town, is home to Trail’s End Bookstore, which was forced to close from Wednesday, August 20, until Saturday, August 23, due to fire activity, loss of power, and mandatory evacuation orders.

Reopened now, Trail’s End plans to donate proceeds from coffee sales at its espresso bar to vetted fire relief funds, and it has set out a donation jar for customers.  The town of Winthrop suffered a very personal blow during the fires, explained store manager Chris Janikowski: Two of the firefighters killed on August 19 in Twisp grew up in Winthrop, including the youngest of the three, 20-year-old Tom Zybszewski.

Though the evacuation is over, “it is still incredibly smoky, so there are not a lot of people in the street,” Janikowski said. “[Tourism is] definitely our bread-and-butter in this kind of community.” Over the last several days, Trail’s End has seen sales drop to about $450 to $500 a day compared to $1,300, the store’s usual sales at the same time of year, he reported.

Another problem that may continue to affect businesses is the closure of Highway 20, the main artery that feeds Seattleites and other visitors into the area. The highway could remain closed until next spring. But Janikowski is looking on the bright side. Last year’s Carlton complex fire, which was much closer and much more threatening to Winthrop, also resulted in a much bigger financial hit.

“Last year, we didn’t have power for 12 days, and we only lost power for 18 hours this time around. Plus, the fire last year started in mid-July, and that’s height of the season,” he said.

Because Trail’s End is open year-round, Janikowski noted that it will be easier for the bookstore to recover profits than for other local businesses that are only open during tourist season.

In Ellensburg, Washington, Michele Bradshaw, who owns Pearl Street Gifts and Books, said the area, which is about 100 miles south of the current fire, is beleaguered by smoke and ash. The same is true for Leavenworth, Washington, where Pat Rutledge, owner of A Book for All Seasons, said her community is doing okay, but is suffering from the smoke.

Further south, in Northern California, Anne Driscoll, owner of Oakhurst’s Branches Books and Gifts, said conditions have been extremely smoky and hot in her area, as the fire is currently blazing on the other side of a nearby mountain.

“It’s really bad,” said Driscoll. “My husband is a captain for the Fresno City Fire Department and they have all been working a ton of overtime. It is just hideous, dry terrain and really hard to get a handle on. So far we are safe, and I pray that no more firefighters are hurt or structures damaged.”

John Russel, owner of Mountain Bookshop in Sonora, California, reported that his area is currently in the clear, in part, due to a huge fire two years ago — the” Rim Fire”— that burned up much of the natural flammable resources.

“There are fires all around us but a distance off,” Russel said. “We are getting smoke, but that is the extent of the impact. The weather is still quite warm; 95-plus degrees every day with a fair breeze, so that always causes one to be cautious.”

Thom Chambliss, executive director of PNBA, offered a reminder for booksellers affected by the fires: the Book Industry Charitable Foundation (Binc) offers assistance to booksellers and their families who have emergency needs caused by disasters.

“We would encourage any of our stores to turn to [Binc] in natural disaster cases,” he said.