Chuck Robinson, the longtime independent bookseller and cross-country bike-riding philanthropist, is on the road again.

Which road, exactly, he wasn’t too sure about when he spoke with Bookselling This Week during a break on Monday, September 18.

Robinson was traveling that day with an old buddy and fellow enthusiast of both biking and charitable giving: Richard Hunt of AdventureKEEN, a publisher of outdoorsy guides to such pursuits as hiking, paddling, and, of course, cycling.

Hunt had traveled from his home in Cincinnati to Grand Rapids, Michigan, to join up with Robinson for a few days.

Where the pair were exactly as lunchtime approached was vague. “That’s a very good question! We somehow took a wrong turn this morning talking. Richard and I hadn’t seen each other in a long time,” Robinson said with voluble good cheer.

The 69-year-old former owner of Village Books and Paper Dreams in Bellingham, Washington, has been in high spirits since he embarked on his ride September 1 in North Dakota. Monday was ride day 15 because he is taking a few rest days along the way.

“The weather is great. It was real foggy this morning when we left Grand Rapids. It’s warmed up a bit,” he said. “I’m just pleased that I haven’t had to ride through rain yet, but I’m sure that will happen at some point.”

Robinson is happy to be on the road again two years after an earlier journey was cut short when he was taken down by two errant farm dogs in North Dakota. The encounter, at mile 1,480 of a planned 2,400, knocked him off his bike and damaged five ribs. 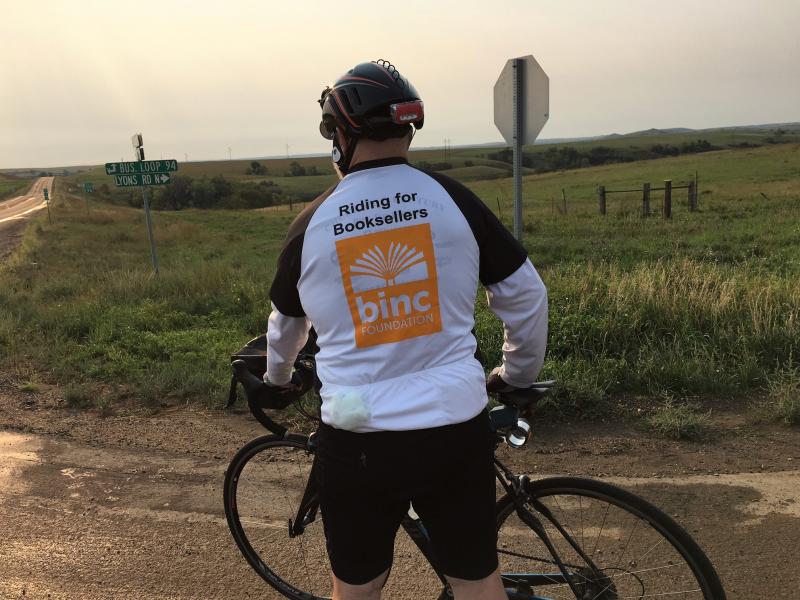 Chuck Robinson on day one of his 2,000 mile journey that began in North Dakota on September 1.

This time, he started near the accident site with plans to travel 2,000 miles to Bar Harbor, Maine.

He is logging his journey on a blog where he reflects on his joy in the scenery and wildlife, as well as his pleasure in knowing his effort will bring attention and money to three cherished nonprofits.

His first ride attracted pledges of almost $30,000 for Binc, the Whatcom Community Foundation, and Robinson’s high school, which was hosting his class reunion that year.

“For a lot of bikers, a cross-country trip is one of those bucket-list things that everybody says they want to do someday. Two years ago, I set out to do that and said if I was going to do it, I might as well make it worthwhile for some organizations,” Robinson said.

He is hoping to garner as many donations for what he’s dubbed Chuck’s Big Ride Redux 2017.

He’s asking contributors to donate at least 1 cent per mile. Last time, he asked for pledges, but those proved wearisome to collect, so this time Robinson has created dedicated links to Binc, the Whatcom Community Foundation, and Whatcom Community College that will track donations specific to his ride.

In addition, Garth Stein, the best-selling author of The Art of Racing in the Rain (Harper), has offered to match Robinson’s donation to Binc.

Robinson’s ride comes as Binc is being called upon by a dozen booksellers affected by the recent hurricanes in the South, said Kathy Bartson, director of development for Binc.

“He’s raising awareness as he rides,” she said. “It’s unfortunate that there are natural disasters, but it is making the connection. People are understanding that’s what we are there for.” 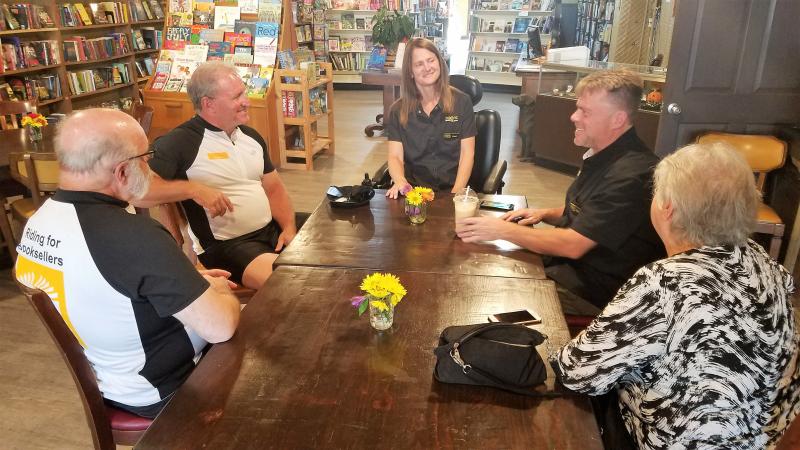 Chuck Robinson and Richard Hunt, left, visited with Jim and Staci Stuart of Stirling Books & Brew in Albion, Michigan, along with Chuck's wife, Dee, at right.

The bookstore opened in August, five months later than owners Staci and Jim Stuart were originally planning after an accident with a falling shelf paralyzed Staci.

Staci’s friends and family launched Support Staci to help the couple after a lapse in insurance left them with $177,000 in bills. Binc is also providing financial support with a matching grant of $2,000.

“Even with some misdirection and a flat tire, it was a great day, and how inspiring to talk with someone who’s been through so much and still has a great outlook on life,” Robinson wrote on his blog about the day’s journey.

Robinson and Hunt stopped Tuesday evening at Literati Bookstore in Ann Arbor, Michigan, where Hunt presented Binc with a check for $3,823 on behalf of AdventureKEEN. 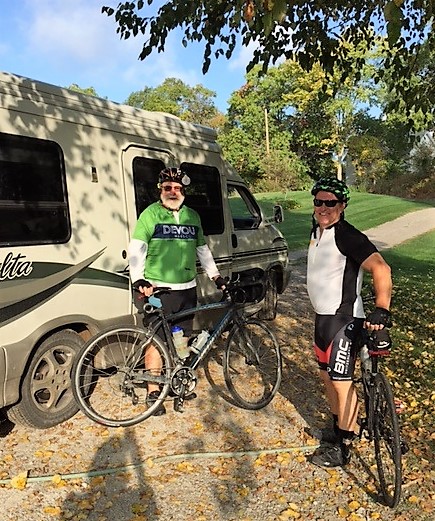 Chuck Robinson and Richard Hunt get going on the morning of Wednesday, September 20, while Chuck’s wife, Dee, prepares to follow along in the couple’s Rialta camper.

Bartson said the pair spent the night at the home of Binc Executive Director Pam French before resuming their journey this morning; Robinson told her he expects to hit the halfway point of his trip sometime today.

Robinson founded Village Books and Paper Dreams in 1980 with his wife, Dee, and they sold the store to three of their employees early this year. He has since started his own consulting business, dubbed Chuck Robinson Associates, but said he is definitely taking things easier: The bike ride is a good metaphor for his life these days.

“The most interesting thing about riding a bicycle is you’re going much slower than you are in a car and you can be more observant of the things around you,” Robinson said. “You see things and get to observe things a little bit more carefully.”

Readers of his blog can follow his voyage, where he notes his mileage, his daily playlist — the Beatles are a favorite — and any sights that caught his eye, complete with photographs.

“Most of the wildlife I saw today were repeats of previous days — ground squirrels, snakes, frogs, grasshoppers, crickets, birds. But just after lunch in Manawa, a white-tailed deer leapt (and I mean leapt) across the road about half a block ahead of me,” Robinson wrote on day 11. 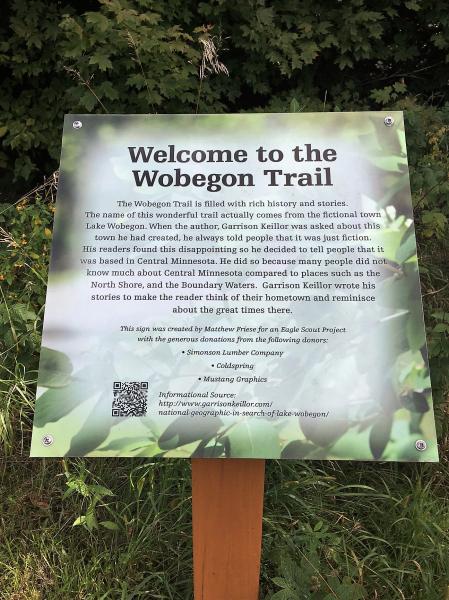 Chuck Robinson is taking copious photos along his route, including this snapshot of the marker for the Lake Wobegon Trail in Minnesota, which takes its name from the fictional town invented by author Garrison Keillor.

He also notes any encounters of the canine variety. None have been fearsome so far, and on Monday dogs were steering clear altogether. “We heard one bark, but it didn’t come after us,” Robinson said.

He is averaging about five hours of actual riding time each day, pedaling 13 to 15 miles an hour. By the weekend, he expects to reach Cleveland, Ohio, where he will take a rest day.

“If there is no mechanical problem or injury or horrible weather, I should be in Bar Harbor on the 12th of October,” he said.

Robinson’s goal for this year’s ride beyond the actual cash raised is inspiring others to incorporate philanthropy into their lives. “I hope it encourages somebody else. Not that they should get on a bike and ride someplace, but that there are opportunities to do things and bring attention,” he said.

Robinson demurred regarding any big plans for after his big ride. “I told someone, ‘Maybe when I get to the East Coast, I’ll be so tired of riding, I’ll chuck this bike into the Atlantic.’ I don’t think that’s likely to happen, however. But I don’t have any plans, and I don’t have any big rides to do,” he said.