Over the past holiday season, several independent bookstores paired with other indie retailers in their communities for holiday coupon promotions. While the results of these inaugural efforts did not result in a pronounced sales increase, valuable lessons were learned, the stores garnered positive PR among customers, and those who participated believe that, with some adjustments, cross-promotions are initiatives whose time has come. 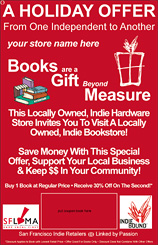 When the results of the effort were analyzed, it became clear that the program presented some hurdles for consumers. "I think the promotion suffered from having too wide a scope and not enough participation," NCIBA Executive Director Hut Landon explained. "In most instances, redeeming a coupon meant going to another neighborhood of the city rather than right down the street. Also, hardware stores may not be the best partners for this kind of promotion, as their customers tend to shop on an as-needed basis more than for gifts."

While acknowledging the appeal of discounts in the current economic climate, Landon said that "discounting remains a hot-button issue for independent booksellers" and that participation might have increased if the promotion was a "value-added offer instead of a discount." 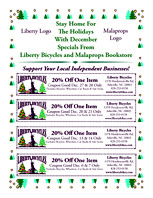 Taking its cue from the Bay-area promotion, Malaprop's Bookstore/Cafe in Asheville, North Carolina, partnered with local Liberty Bicycles for a holiday coupon offer. Although the results didn't quite meet expectations, Malaprop's Linda Barrett Knopp said that the arrangement was ultimately "worth it."

As with the Northern California promotion, the Asheville businesses weren't physically close enough to each other. "Both partners should have been downtown," Barrett Knopp explained, adding, "We began in November and could have used a little more lead-time."

Over the holidays, Malaprop's was far busier than the bicycle shop, and "it would be better to have similar foot traffic," Barrett Knopp said. "Also, they were not as engaged as we were.... Your partner needs to be as enthusiastic as you are."

Still, she said, Malaprop's would do a similar, although improved, promotion. "It's very easy and inexpensive. Although we didn't see a lot of people using the coupons, it was definitely noticed and appreciated. So getting the message out there about independent businesses working together was valuable. And it seems like a good idea to be partnering during a key time like the holidays." 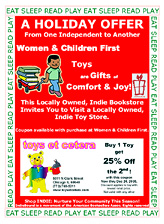 Women & Children First in Chicago partnered with a local toy store for a holiday promo offering customers an incentive to shop at the toyshop, and the toy store did the same for bookstore. Each created 8-1/2" x 11" fliers advertising the promotion, and displayed them at the front door and at the cash/wrap.

Although Women & Children First also didn't see a big return on coupons, customers' reactions were "overwhelmingly positive," said Bubon. "They saw it as an extra benefit and thought we were very clever to do a cross-promotion. I think this is very important. Customers want to see struggling businesses try new marketing ideas; they are more likely to offer support and continue to invest in you if they observe you trying new ideas."

Samples of these and other bookstores' cross-promotion fliers are available to ABA members in the "handout" materials from the Winter Institute panel "IBA Study: Spreading the Shop Local/Local First Message by Working Closely With Fellow Indie Businesses" on BookWeb.org. --Karen Schechner