Following the destruction in the South from Hurricanes Harvey, Irma, and Maria, wildfires have now beset Northern California’s wine country, including the bookstore-rich Sonoma and Napa counties. 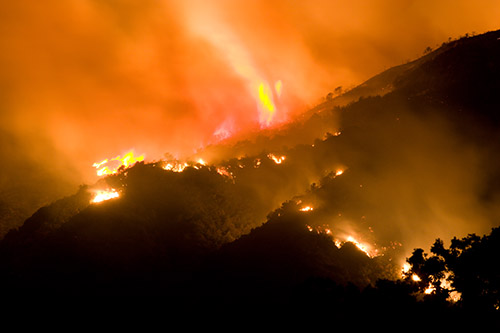 Wildfires have burned through the northern part of the state since Sunday and remained out of control on Tuesday. So far, according to the New York Times, at least 17 people are dead, hundreds are missing, and 2,000 buildings either destroyed or damaged. As of Wednesday, there were still large wildfires burning across 140,000 acres, the Times reported.

Book Industry Charitable Foundation (Binc) Executive Director Pam French said she has already received the first call from a bookseller for disaster assistance from the fires. According to French, one employee from Copperfield’s Books, which has locations in Napa, Sonoma, and Marin counties, has completely lost her house, and many others have evacuated.

Calvin Crosby, executive director of the Northern California Independent Booksellers Association (NCIBA), told Bookselling This Week that the association has been getting more of an idea of the damage as they hear from affected booksellers.

“Most stores are open (with low expectations of sales), but they are opening more as a community gathering place,” said Crosby, who is currently working out of Marin since the NCIBA offices in Sonoma are without power. “Most event schedules for the area have been canceled. Homes, stores, and businesses, including our office, still have no power.”

The fires have also affected the planning process for the NCIBA Fall Discovery Show next week, which takes place October 18, 19, and 20, at the South San Francisco Conference Center, said Crosby.

“Things were going to according to plan, and we were feeling really good about it. This has kind of thrown a wrench in things,” he said. The show, however, is still scheduled to happen. 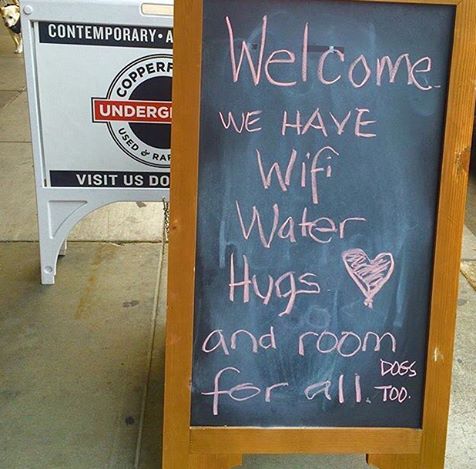 Copperfield's Books has been offering both material and emotional comfort to customers during the fires.

Many bookstores in the affected areas were closed Monday due to air quality and safety concerns. Napa Bookmine opened for a limited time on Tuesday; a Facebook post by the store gives one special reason for staying open at least a short time that day: “#napafires are still burning and the air quality is the pits, but both our shops will be open today 10-3 (or as long as possible) so no one misses out on pub day for the new John Green, Turtles All the Way Down! We’re here for hugs and support, if you need it! Much love to all our wonderful Napa family.”

The store, which was open again on Wednesday, is sure to suffer a significant business interruption from the fires, said owner Naomi Chamblin; however, their larger store was much busier on Tuesday than they thought it would be. To make Turtles even more accessible that day, the store also created a special service for customers who couldn’t make it in.

“We sent out an e-mail to customers to offer a John Green delivery service so if people didn’t want to leave the house we could drop off a copy of the book,” said Chamblin. When customers responded, an employee was sent out to drop off several copies around town.

Readers’ Books in downtown Sonoma was also open Tuesday after being closed Monday. The store’s buyer, Jude Sales, told the San Francisco Chronicle, which wrote about how bookstores are helping others during the disaster: “We want to be here for people who need a place to go. We feel like we want to do something — if nothing else, we want to be a safe place for people.”

On Tuesday, the store posted a message for the community on its website: “We hope that all members of our community affected by the recent fires are safe and our hearts go out to those who have suffered great losses. We will do our best over the next few days to provide a gathering place for all, but our hours may be erratic and our event calendar will change as needed. Please stay safe.”

Copperfield’s Books, which was also highlighted in the story, posted a message of support on Twitter, noting that its store is ready to serve as a place of refuge for residents: “To all of our community who have lost so much these last couple of days, please know that Copperfield’s stands with you. Our Petaluma, Sebastopol, Novato, Montgomery Village, Healdsburg, and San Rafael stores will be open, providing free wi-fi, charging stations for phones, bathrooms, and a safe kid- and dog-friendly space for all who have been impacted by this terrible tragedy. The landscape of our home may have changed, but we will not abandon it, we will rebuild and get through these trying times together.”

Crosby suggested that anyone who feels the need to do something immediately should make a donation to Binc in light of the Copperfield’s staff member who lost her home, and other losses to come; Chamblin noted that she has already lost track of the number of people she knows in her community who have lost everything.

“Binc is able to help with immediate needs by issuing gift cards to be used for food, water, shelter, etc.,” said French. “The best way to determine how Binc can help is to give us a call or send an e-mail or text.”

Binc will take disaster applications for individuals and stores over the phone or via e-mail, whichever works best for the bookseller. Binc can be contacted toll-free by calling (866) 733-9064 or by e-mailing or texting to help@bincfoundation.org.