Whether they featured classic literary love stories, promoted modern stories of dating and romance, or celebrated an appreciation for their customers, booksellers enjoyed a bump in sales and increased traffic in their stores for Valentine’s Day. 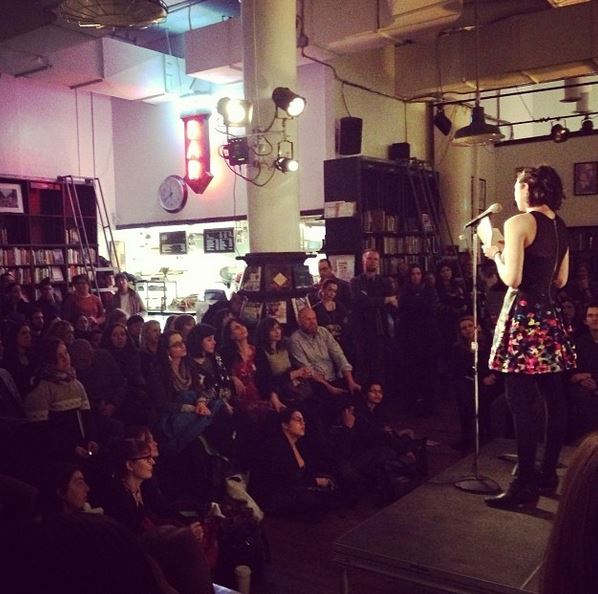 Katie Heaney reads from her book, Never Have I Ever: My Life (So Far) Without a Date.

In the weeks leading up to February 14, Housing Works Bookstore Café in New York City hosted five well-attended events related to dating and literary love. “We traditionally do a week or so of Valentine’s-related programming, and it’s always been very fun and successful,” said Amanda Bullock, Housing Works’ director of public programming. “It’s typically a mix of recurring and one-time events, which helps keep it fresh but also something people look forward to each year.”

At the end of January, the store held a launch party for Katie Heaney’s memoir Never Have I Ever: My Life (So Far) Without a Date (Grand Central Publishing), sponsored by Tumblr and featuring dating stories from other writers and bloggers. “We had a full house (250 people) and it was a great event,” said Bullock.

The store held another dating-related launch on February 4 for C.B. Bryza’s picture book for grown-ups, Are You My Boyfriend? (Gallery Books). The event featured several writers, comedians, and storytellers, and drew another large crowd to the store.

“At the launch events, the [featured] books were definitely popular,” said Bullock, adding that since Housing Works is an all-donation nonprofit organization, the bookstore brings in an outside bookseller for some large launch events. Brooklyn’s WORD bookstore was the seller for Katie Heaney’s launch, and they sold a good amount of copies, said Bullock. Housing Works sold copies of Are You My Boyfriend? at the C.B. Bryza event, and “we sold a whole bunch, which was great,” said Bullock.

For the second year in a row, Housing Works hosted “The OkCupid Show: Stories of Love, Sex, and the Internet,” which showcased more dating stories from featured writers and storytellers. It drew a full house of 300 people, said Bullock.

During the week of Valentine’s Day, Housing Works hosted its fourth literary speed dating event, which has a $15 registration fee that includes a free drink and is limited to about 70 attendees. “It always sells out and it’s a really good time,” said Bullock. The event, the second actually held on a Valentine’s Day, included a lot of literary ice breakers for the daters, including a name tag bearing a “literary name” based on their favorite book.

On the snowy night before Valentine’s Day, Housing Works hosted its first-ever four-course seated dinner in the bookstore called “Love Bites: A Valentine’s Dinner Celebrating Classic Literary Lovers.” The ticketed event was capped at 20 people to give it a more intimate feel. The dinner was $160 per couple and included a “white soup” inspired by Pride and Prejudice, a Waldorf salad inspired by The Great Gatsby, chiles en nogada inspired by Like Water for Chocolate, and desserts inspired by Romeo and Juliet with a hot wine from Jane Eyre. “I hope it inspired them to read!” said Bullock, adding that the books that inspired each course were on display in the store, along with quotes from the books about love and/or food.

“It was a huge success, the food was delicious, and it was a really special night,” said Bullock. 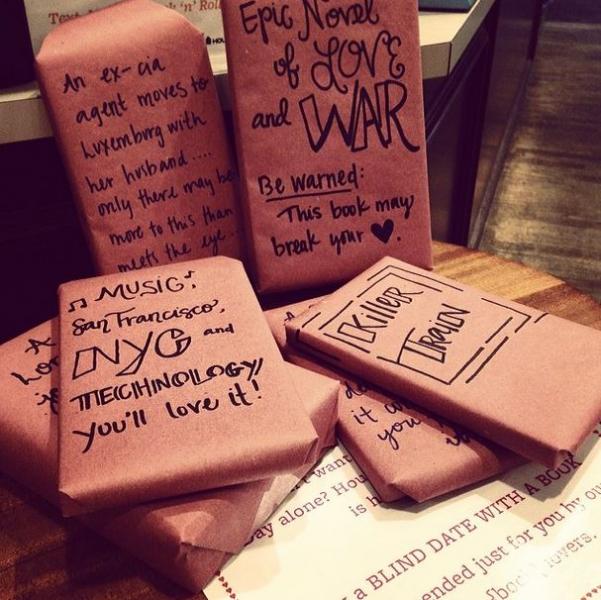 Housing Works also held a “Blind Date with a Book” promotion, which was enjoyed by customers and staff.

Despite having to close the store the day before Valentine’s Day due to snow, The Doylestown Bookshop in Doylestown, Pennsylvania, held its planned Valentine’s Day promotion, which offered everything in the store discounted at 20 percent. In the days leading up to Valentine’s Day, Doylestown sent out an e-mail announcing the sale and informing customers about the reason behind it: “Because we love you! We really appreciate your commitment to shopping local, and supporting our community’s economy. We’d like to give some of that love back to you this Valentine’s Day.”

“We had a great response to the sale,” said owner Glenda Childs. “It made for a successful day in an otherwise slow, wintry season.”

Several customers told Childs that they made the trip into town because they wanted to shop at the bookshop after receiving the e-mail. “It was the first time the store, under my ownership, had given 20 percent off everything in the entire store,” said Childs. “It worked well, and I plan on doing this again.”

Vroman’s Hastings Ranch in Pasadena, California, hosted a “literary matchmaking” event on Valentine’s Day that had booksellers playing matchmakers who aimed to pair customers with books they would love. The kids in attendance made Valentine’s cards and root beer floats.

Vroman’s also hosted a sold-out event with B.J. Novak at the New Beverly Cinema for his new book, One More Thing (Random House). “Admission included two tickets and one copy of the book, so I think it was an excellent Valentine’s Day date,” said Rachel Ormiston, digital media coordinator at the bookstore. “It was very successful and everyone really appreciated the event. The idea of promoting an author event as a great Valentine’s Day date is something we definitely want to do again.”

During the week leading up to Valentine’s Day, Ormiston posted gift ideas with photos each day to the store blog. Sales and in-store traffic were up the whole week, she said.

“I think the posts about specific items really helped bring people into the store, and I saw sales for those particular items increase,” said Ormiston.  “I also know that customers appreciated the option of an author event as a Valentine’s gift. I think everything went well, and it was obvious that many customers share our belief that books make the best gifts, no matter the holiday.”