A book blogger, Army veteran, and nurse is planning to bring an independent bookstore to the southern suburbs of Hartford, Connecticut, this summer. 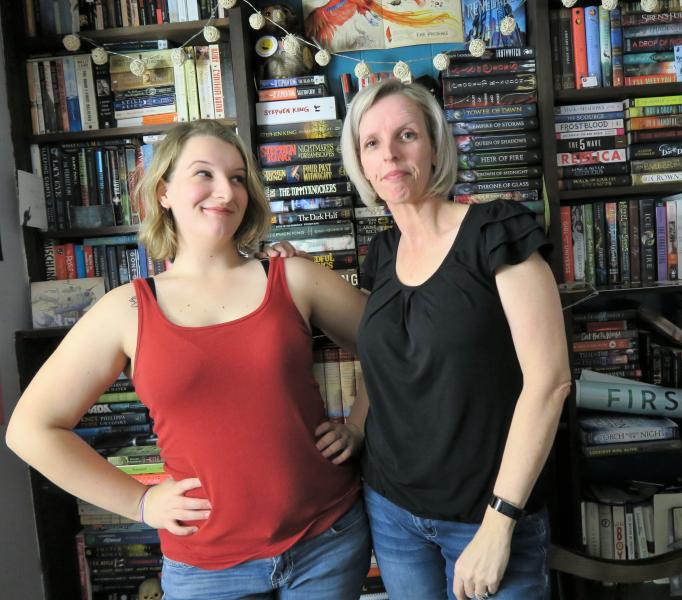 Belle and Karen Opper are opening That Book Store.

Karen Opper, who has reviewed books for about five years on her Kissin Blue Karen blog, is a full-time nurse at a Veterans Affairs hospital but said her dream is to work with books for a living.

She was a combat medic in the Army and served for six years as a sergeant and squad leader in the 319th Medical Detachment before going to college for nursing. She announced her plans for the bookstore on her blog under the heading “taking my love for books to the next level.”

“I’ve always had a passion for books,” Opper told Bookselling This Week. “I’m getting older. I can’t go back and redo my career, but I’ve decided I’m going to open a bookstore.”

Opper has taken a number of steps to make her dream a reality, including picking the name That Book Store, which she has registered with the State of Connecticut as a limited liability corporation, or LLC.

Opper said the idea for the name came from her husband, who knew she didn’t want to have a formal name or use her family name. “Where am I going? I’m going to That Book Store. It’s grown on me, and I’m really attached to it now,” Opper said.

A recent transplant from Florida, Opper said when she moved to Wethersfield, Connecticut, she searched for a nearby independent bookstore without success. That gave her the idea of bringing an indie bookstore to her town or the neighboring municipalities of Newington and Rocky Hill.

“I picture someplace really cozy and inviting,” she said. “You’re comfortable as an adult walking in, but it will also be whimsical and inviting enough for children to come for story hour.”

A mother of four, Opper said her eldest, 19-year-old Belle Opper, will manage the store for the first six months while she continues working full time as a nurse.

A high school graduate who attended college in Florida before joining her mother’s endeavor, Belle Opper said she’s excited to become a bookseller.

“My mom has always instilled the importance of words,” she said. “I want to help others be open to the idea of reading, and encourage younger people to read. I’ve always loved bookstores, and there are no bookstores near us.”

Belle Opper is the artist who created the store’s logo, which features an image of an overstuffed armchair. She also plans to be a major part of a planned book zine featured as a reward in a newly launched Indiegogo campaign to raise funds for the store’s founding.

Karen Opper estimates it will take $100,600 to open the 1,500- to 3,000-square-foot store she envisions, depending on how extensively she has to refurbish the space she leases. She hopes to raise $20,000 through crowdfunding and will invest $20,000 of her own savings. The rest she plans to borrow from a bank.

Opper recorded a video on her YouTube channel to support her crowdfunding efforts. She has also uploaded dozens of other videos related to her blogging endeavor.

Opper estimates she’s reviewed about 600 books for her blog, mostly fiction, science fiction, and thrillers. She said she’s looking forward to sharing this love for books in her own store. “I’ve never owned a small business before,” Opper said. “I want it to be as successful as it can be.”

She’s been doing as much preparation as she can: she’s obtained a federal tax identification number, written a business plan, purchased a website domain, and joined the American Booksellers Association.

“I’ve been all over the ABA website and reading everything I can,” she said. “The ABACUS study gave me a lot of the information I needed to put my business plan together by showing me how bookstores around the country and in my region are doing. ABA has also pointed me to affiliates like Kobo and Libro.fm. I have read almost all the links from current and past presentations, which has helped me to gain more knowledge and insight into bookselling today. The DIY section has provided me with graphics and statistical information to share on my website, and soon in my store.”

A subscriber to Bookselling This Week, Opper said she’s enjoyed reading the weekly news about other new stores opening around the country. She’s already picked her point-of-sale system after reading about options on ABA’s website. “The forums have been my favorite part, where I can search through past questions and answers given by professional booksellers,” she said.

She’s also tapped into the expertise of SCORE mentor John Molish, who retired after a 30-year career in publishing, including in executive sales roles at McGraw-Hill Children’s Publishing, St. Martin’s Press, Tantor Media, and others.

As SCORE’s go-to mentor for publishing, Molish said he usually spends hours on the phone, but since he lives in Connecticut he was able to meet with Opper in person and take her on a tour of his own favorite bookstore: R.J. Julia in Madison.

“I took her through that whole store, and showed her how to face out books, how to make displays on tables, how to put the book in the customer’s hands — all that basic bookselling,” Molish said.

He said he was impressed with Opper’s preparations. “She’s done a lot of homework. Her daughter is helping her. She’s done a nice job on her business plan,” Molish said. “She thought through everything, and she covered all of the subjects well and in detail.”