Board Games Offer Boost in Sales for Indie Bookstores

The American Booksellers Association is asking bookseller attendees of the 2019 Winter Institute in Albuquerque, New Mexico, to consider serving on an educational panel about selling board games in bookstores. 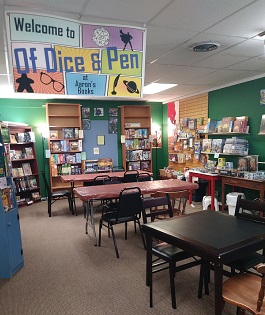 Of Dice and Pen, the game store within Aaron's Books, a bookstore in Lititz, Pennsylvania

Board games are not only a hot trend and growing business, but provide face-to-face social interaction for customers, which is a key component of many successful independent bookstores. These days, the realm of board games includes everything from popular digital games that have made the leap to board games to games inspired by viral Internet challenges to the traditional games of classic childhood.

In addition to booksellers who have integrated board games and play nights into their sales and events, the upcoming panel, “Bringing Play and Revenue Into the Store: Board Games Are Back!,” will feature an independent board game seller member of the Game Manufacturers Association (GAMA), the nonprofit trade organization representing the hobby and gaming industry, who will discuss the aspects of the business and how booksellers can bring games — and customers — into the bookstore.

Since 2016, Aaron’s Books in Lititz, Pennsylvania, which sells new and used books, has offered Of Dice & Pen, a dedicated gaming area in the back of the store with tables set up and demo games available so people can play or test games before they buy. In recent years, toy and game manufacturers have experimented with allowing retailers to test new board games and products, and distributors and game publishers often send retailers demo copies of games at deeply discounted rates that they can use to conduct demonstrations for customers.

Aaron’s co-owner Sam Droke-Dickinson is the manager of this game shop within the bookshop, which focuses on “European-style” tabletop games, role-playing games, graphic novels, and gifts and books from a variety of pop culture fandoms, including sci-fi, fantasy, and anime.

“We have some organized play nights where we demo new games, as well as a very active RPG (role-playing games) community with six ongoing groups meeting at the shop several times a month,” she said. “We also teach Dungeons and Dragons (D&D) to new players of all ages, and we run game events for the middle school.” 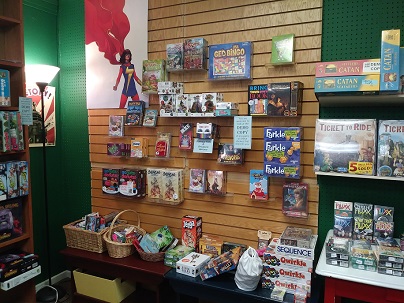 An interior wall of games at Of Dice & Pen

“The biggest impact for us has been in the RPG community,” said Droke-Dickinson, so the store recently expanded that section. “We’ve not only gotten new dedicated customers, but new friends we now spend most of our non-store time with (and store time, too!). We haven’t gotten a lot of ‘gamers’ as we originally aimed to do, but the families of the community are starting to figure out that we are the place to go if they want to learn about games and need help picking out presents.”

Games make up about 10 percent of total inventory at Aaron’s and comprise about 10-15 percent of total gross sales so far in 2018, said Droke-Dickinson. Store bestsellers include classics like Ticket to Ride and Settlers of Catan as well as lesser-known games like Sticky Chameleons, King Domino, Gloom, and Welcome to the Dungeon. Aaron’s Books became a member of GAMA during the 2016 holiday season, and staff attended the association’s trade show in 2017 and 2018.

Molly Gilroy, a manager at Barstons Child’s Play bookstore, told Bookselling This Week that games have been a cornerstone of the store’s business from the beginning.

“We do weekly game nights, demo games for kids, and use them as an excuse to get staff together for a fun evening. We are a toy store, too, so it is a bit different for us, but I think they are a great way to start the conversation about unplugging and really connecting with your family,” said Gilroy. 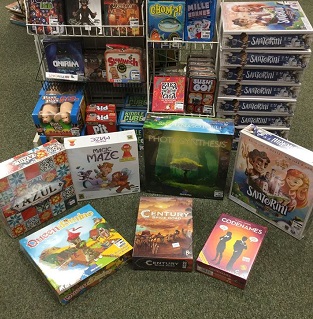 A selection of games at Barstons Child's Play, which has four stores in the Washington, D.C., area

“Our store’s owner [Steven Aarons] is a huge fan of games and, as a kids’ store, it makes sense to have such a great developmental tool (that is also just super fun) ready to sell,” said Gilroy. “Our community loves the game section. We have lots of college students, grandparents, and young families coming in to get a family game to play together, and that is very much in line with our company’s belief in the importance of play and interaction. What more could you want in a product?”

Brenda Weaver, owner of Juneau, Alaska’s Hearthside Books & Toys, said the store sells board games in part because they fill a niche in Juneau. In fact, Hearthside’s inventory included board games when Weaver bought it from the original owners a little over four years ago. Prior to Hearthside’s foray into board games, she added, there were really no other places that sold them besides the local Fred Meyer superstore.

“Board games attract customers to our store to discover the variety of other merchandise we carry,” said Weaver. “As a merchant in the mall, we support board game clubs by reserving the community room for them at no charge.”

The store’s Juneau Board Game Club meets on the first and third Sunday of every month in the Nugget Mall Community Room, across from the store. At club meetings, participants ages 14 and up can bring their own games or try out new games, and food and drink is available for $5, which helps cover clean-up fees.

“We also have demo games, as well as a board game lending library for the general public to experience, and we’re in the midst of setting up a specific game night beginning after the holidays for folks to come in and experience games,” said Weaver. “In addition, we purchase advertising and give discount coupons for the local game convention that occurs every January.” 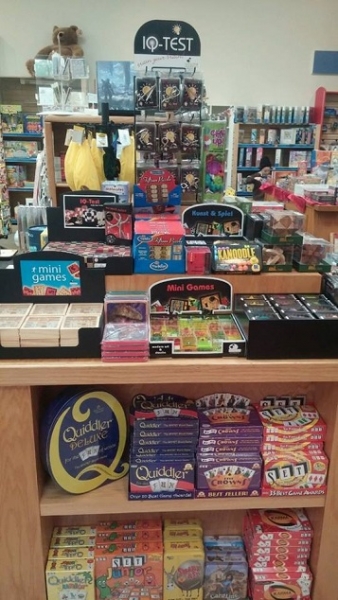 According to Weaver, Hearthside sells at least 3,000 board games per year, not including role-playing games or card games such as Magic the Gathering and Pokémon; this represents approximately 4 percent of Hearthside’s gross sales and between 2.5 and 3 percent of the store’s inventory. Bestselling games at Hearthside include Settlers of Catan, Banangrams, Ticket to Ride, and Exit the Forbidden Castle, though they also sell a fair number of classics like checkers and chess as well.

“The community has been extremely supportive of board games,” Weaver told BTW. “Customers return, bring their children, and now their children’s children. They feel very comfortable in recommending games that we may not have, special order games we don’t have on order, and recommend us to their friends.”

“Bringing Play and Revenue Into the Store: Board Games Are Back!” will take place on Wednesday, January 23, from 10:40 a.m. to 11:40 a.m. at Winter Institute 2019 in Albuquerque. Booksellers with experience selling board games in their stores who are attending next year’s Winter Institute are invited to contact ABA Education Manager Lisa Winn to learn more about joining the panel.