The Writer’s Block Brings a Community Space to Anchorage

The Writer’s Block, which held its soft opening in January, is owned by Mares, Teeka Ballas, Kathy McCue, and Dawnell Smith, with Mares as majority owner. The four came together in 2012 when a local performing and visual arts nonprofit was on the verge of financial collapse. After hearing the news, Mares, who also owns a micro-publishing house based in Anchorage, held a meeting to discuss the idea of establishing a hub for art and literature in the community. It was there that Smith, Ballas, and McCue expressed interest in getting involved. Together, they came up with the early concept for The Writer’s Block. 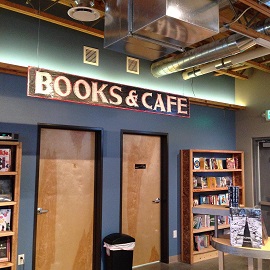 A look inside The Writer's Block

“I spent the following three years working non-stop to secure funding, as well as getting the building designed and getting the financing in order,” Mares said, adding that she is currently the primary investor in the endeavor. “It simply could not have come together without all four of us participating in really meaningful and serious ways.”

During their search for a space they happened upon Adults Only. “One of the things we really wanted to do was show the transformation from [the store’s] past to the potential of what its future could bring to this vibrant community of Spenard,” she said. “Spenard has always been the funky neighborhood within Anchorage, and it’s always been the place that’s attracted artists and musicians and working-class people.”

Before opening, the owners had to do the work of destigmatizing the location; Mares noted that prior to the transformation, local parents were afraid to let their children walk past the store on their way to school because they did not want them to be solicited.

“We did a series of programs called ‘Transforming Adults Only.’ We partnered with a group of local artists and they, in turn, partnered up with the local development community that had an arts funding grant,” said Mares, adding that Smith and Ballas ran the program for three months. “It was a really deep exploration of the sex industry as well as the comparisons between sex positive and sex negative through the eyes of the artists...it really rooted our neighborhood in support of us.”

In addition to artists, the space now also welcomes writers, poets, and musicians. In the past eight months, The Writer’s Block has held a number of different events that are all organized by Ballas, including monthly poetry readings, a book launch for Kathleen Tarr’s We Are All Poets Here (VP&D), and an intimate concert with violinist Rachel Barton Pine. Each of these events has shown Mares that there is not only interest in these types of program in her community, but overwhelming support as well.

“Early on, those events set the bigger stage. Now people here know that no matter what we put on, whether it’s a small book signing with a local writer or a local musician or a touring act, it’s going to be good,” said Mares.

The physical space of the store helps to attract customers, added Mares; customers are welcome to buy a book to read before they grab lunch and make themselves comfortable in the seating area of the café, which is filled with eclectic furniture and resembles a living room.

As a joint bookstore/café, The Writer’s Block blends art and literature of all genres with a family-oriented community space. “When we designed the building, we knew it was going to be a bookstore and a café. We designed it to be seamlessly functioning,” said Mares, noting that floor-to-ceiling shelves wrap around the perimeter of the store, with a comfortable seating area, stage, and café in the center. “There isn’t a place that you can sit where you’re not seeing books.”

While the space is designed to make customers feel welcome and comfortable, Mares says that her dedicated staff is what truly attracts people to the store and keeps its doors open.

“Having the kind of human beings who really care about what they do and care about how they present themselves, the books, and the food to the rest of the community really is what makes a difference,” Mares said. “That’s the one thing we couldn’t plan for because you never know when you open a business who is going to apply. I cannot say enough that they are the folks that make sure everything stays moving forward. We do the planning, but they’re the ones that have to make it happen.”

Currently, The Writer’s Block has about a dozen staff members. “I love the chance to stay on the cutting edge of what’s going on in the publishing world, but also getting to see so many of our growing group of regulars,” said employee Jessa Joehnk, who splits her time between being a server, cashier, and bookseller. She added that her four bosses also make the job exciting, interesting, and fun. “They really care about their employees and their customers, and that care shines through all the time.”

Moving forward, Mares is excited to further cement the presence of The Writer’s Block in the community of Anchorage through collaboration between art and literature. Additionally, she would like to expand the store’s programming for children and local schools as well as its book selection.

“We have a really nice customer base [that is] still discovering us...it’s fun to watch. We have enough support and that keeps us working to make sure we stay open,” Mares said, adding that people are always looking for ways they can help the store. “We’ve been told regularly that this is a very valuable addition to the community and it’s rather heartwarming.”