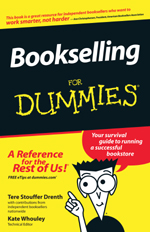 The publishing series that took the sting out of being called a "dummy" is offering independent booksellers a special publication to help them "work smarter, not harder." Beginning at BookExpo America, Wiley Publishing is offering booksellers free copies of a special BEA edition of Bookselling For Dummies. The title -- which will not be sold at retail -- was the result of over six months of intensive work by Wiley, with the close collaboration of ABA and over 30 independent booksellers.

P.J. Campbell, Wiley's director of events, told BTW that "the overall goal for us was, in part, to be able to partner with ABA ... and then to be able to communicate with independent booksellers about the For Dummies brand," while presenting booksellers with solid information to help their businesses. Campbell began exploring the possibilities of the project with colleagues John Helmus, director of trade sales, marketing planning, and Dean Karrel, vice president, trade sales, last fall. She met with ABA to discuss how Wiley might work with independent booksellers in fashioning the book in October 2002.

Campbell said that two keys to the success of the project were author Tere Stouffer Drenth and the book's technical editor, Kate Whouley. A familiar name to many in bookselling, Whouley is an industry consultant and was the editor of the Manual on Bookselling's fifth edition. "They were a wonderful duo," Campbell noted. "They did such a great job in such a short time."

Stephanie Corby, Wiley brand management editorial manager, told BTW that the publisher was committed to garnering extensive input from independents, but realized that the close of the year "would be the busiest time for booksellers." As a result, interviews with booksellers began in January, just four months before the target pub date, meaning, Corby noted, "the book was written on an extra-tight schedule." She credited Whouley and Drenth's editorial planning and detailed outline for helping ensure the book's success. "The information had to be current, and it had to be useful," Corby said. The book covers a wide range of topics -- from assessing the bookselling business environment before opening a store to handling inventory, personnel, and marketing challenges. Corby noted that the Wiley editorial team worked to make sure that Bookselling For Dummies contains the most current information available, including the latest on Book Sense and establishing an online presence.

Drenth, who had worked on a number of Dummies books, brought a seasoned hand to the project, working with Zoë Wykes, Wiley senior project manager, and Whouley. Interviewing booksellers in January and February, Drenth completed the manuscript in about four weeks, said Corby. "Tere just opens up her mind and the words flow onto a\the page." The manuscript for Bookselling For Dummies went into production on April 1 and came off press on May 15.

Both Wiley and ABA will be making the title widely available at BEA. The book will be distributed at the special booksellers' concierge desk at the Radisson Wilshire Plaza and will be available at the Book Sense Lounge (South Hall Room 308 A/B) and the ABA Booth (#2921). Wiley will also be distributing Bookselling For Dummies at their booth (#1237). There will be an educational panel at BEA adapted from material in the book -- "Does This Book Pay Rent?" The panel of booksellers who contributed to the book will be moderated by Whouley. It is scheduled for Saturday, May 31, from 3:00 p.m. - 4:00 p.m. in Room 404B at the Los Angeles Convention Center.

In addition, following the show, ABA will be mailing bookstore members and provisional members a free copy of Bookselling For Dummies.

An experienced independent bookseller not interviewed for the book is Wiley's Campbell, who worked as the director of events and general merchandise manager for the former Book Mark Café in Oyster Bay, Long Island. "I've been in the shoes of independent booksellers," she noted with a laugh, "I know what the back room looks like." -- Dan Cullen