How editors pick titles to review, the reason why Instagram won’t replace reading, the future of the bookselling business, and visiting indie bookstores on the road were some of the topics explored by the New York Times’ Pamela Paul during a conversation with ABA CEO Oren Teicher at Winter Institute 13. 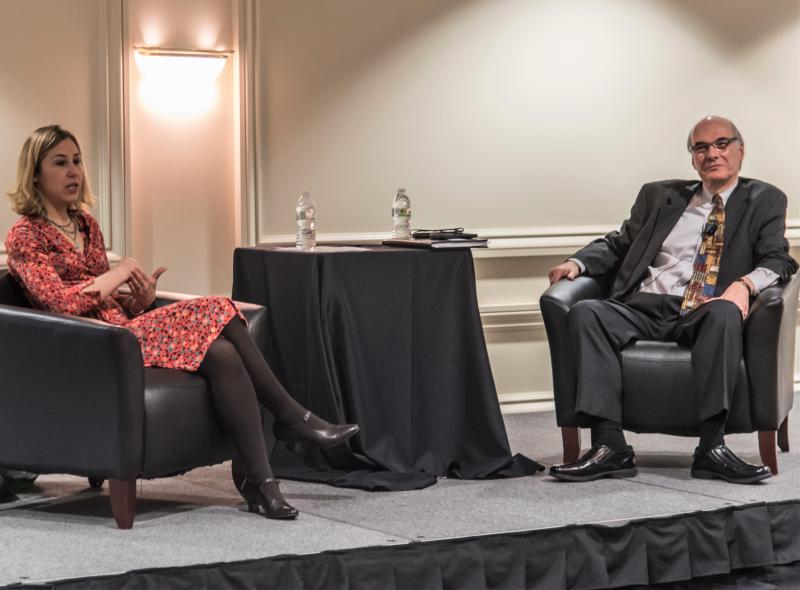 Pamela Paul and Oren Teicher talked about the book business at Wi13.

The pair sat down in conversation following Paul’s appearance with Sarah Jessica Parker during the January 23 keynote breakfast. Paul, the editor of the New York Times Book Review, asked Parker about her life as a reader and her journey from actor, producer, and designer to founder of a new imprint at Penguin Random House, SJP for Hogarth.

Teicher, praising Paul’s skill in guiding her discussion with Parker, asked if anything Parker said stood out for being surprising or unexpected. Paul, an author herself who also oversees books coverage at the New York Times, said that she was delighted to discover that she and Parker both turned to books for the same reason.

Books are a way to not only escape the real world, Paul said, but to live new experiences. “I want to be outside of my world, to be outside of my own perspective, to gain access to another world that I wouldn’t ordinarily have access to, whether it’s because the book is about a 19th-century coal miner in France and I’m never going to be a 19th-century coal miner in France, or if it’s like the book she was talking about today, which is about a Muslim-Indian family in America,” Paul said. “That was kind of a joy, to know that we have that in common.”

Teicher, noting a “dramatic reduction” in books coverage in the general consumer media, asked why the Times has decided to grow the coverage of books.

Calling the decline in criticism and coverage of books “incredibly sad,” Paul said that the Times is the last newspaper to print a freestanding book review section after the Washington Post eliminated its own in 2008. The Times is the only paper today to employ three full-time daily critics, a publishing reporter, a dedicated children’s books editor, and a team that selects galleys for potential reviews, Paul said.

“Covering books is very labor intensive,” she said. “We don’t cherry pick the books we’re going to cover. We review the landscape. Everything gets sent to us, and we look at everything. Now, I grant you, some things we look at for .02 seconds.”

Paul said that even books that aren’t featured in a publisher’s catalog are considered because the joy of every editor and critic is finding the unexpected author or title, such as Frankenstein in Baghdad: A Novel by Ahmed Saadawi, which was published in translation on January 23 by Penguin Books. 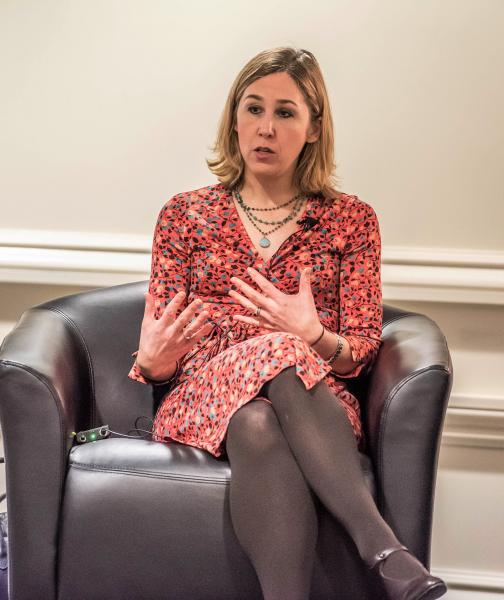 “To make those kinds of discoveries, for us, makes it worthwhile,” she said. Teicher said that those sentiments would sound familiar to their audience of booksellers.

Even as serious criticism in general is on the decline, there has been an expansion of books coverage on the Internet, much of which Paul categorized as “general enthusing.”

“A lot of that is fantastic, but it’s not the same as what we do at the New York Times, which is to approach this journalistically, to have certain standards in terms of conflicts of interest, fact checking; to approach books as we would as journalists any other subject, whether it’s the White House or art or international affairs, and to bring that kind of rigor to books’ coverage, both in terms of criticism as well as feature coverage and reporting,” she said. “That takes a lot of resources.”

A reorganization of the books department did not reduce the staff — which grew by six to eight people last year — but instead ensured decisions would be made strategically with the daily review, Sunday review, and feature articles coordinated.

Before, a book could end up reviewed by a daily critic, in the Sunday review, and be written up in a feature article, not necessarily intentionally. While some books merit multiple articles and even multiple reviews, coverage is less duplicative in the new arrangement, Paul said.

What’s more, book coverage is now less segregated within a specific section at the paper. Just recently, a story about an independent African American publisher from Chicago fronted the national section. “To an outside reader, that was just part of the national news, which is as it should be,” Paul said.

Arguing that “books need to be part of the national conversation,” Paul said that books can and do have an impact on government, society, and culture. “People come to the New York Times, because, unlike most other news organizations, we’re covering it all, and we’re covering culture as rigorously as we are covering politics,” she said.

Teicher asked Paul to reflect on the health of the book business. “The book business goes through all kinds of gyrations and up and downs,” he said. “You have heard our piece of it, [that independent bookselling] is doing reasonably well, certainly better than other parts of [the industry]. But, from your perspective, where is the book business going? What is the future like?”

Calling herself “bullish” on books, Paul said there is every reason to be optimistic.

Just as e-books have not supplanted print books, the distracting allure of smartphones won’t triumph over the pleasures of reading, Paul contended.

“I’m not saying that the digital world does not encroach upon people’s free time and energy, but I think that we’re turning a corner and that people are looking at their lives and how they are using their free time, and you need an antidote to Twitter and Instagram,” she said.

Long-form, immersive storytelling satisfies in a way that tweets never will. “In a way, our biggest competition is really, really good television, but I feel that even television is aping novels,” she said. 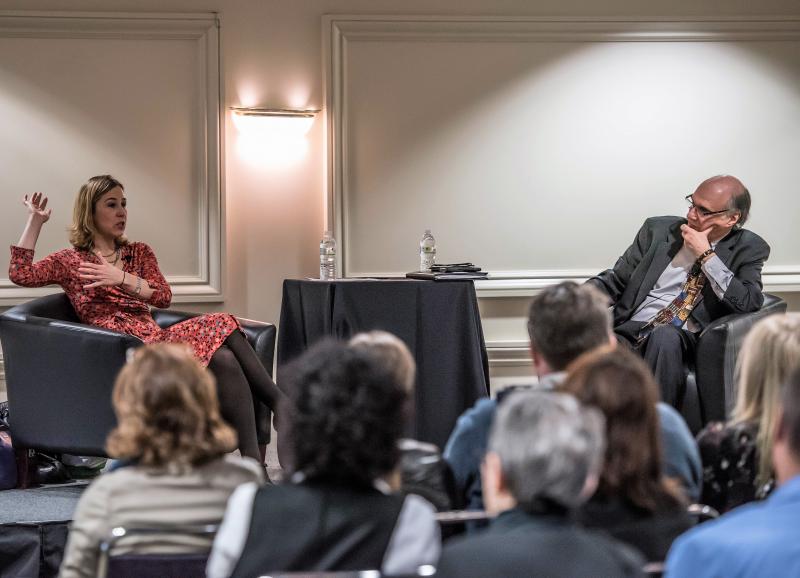 Paul then talked about her memoir, My Life With Bob: Flawed Heroine Keeps Book of Books, Plot Ensues (Henry Holt & Co.), which recounts the story of the diary of books she’s kept since her youth. The “Bob” in the title is not a man but her “Book of Books,” a journal that she has semi-facetiously written would be the first thing she would grab in a fire, even before photo albums.

“Part of the reason I think about my life in terms of the books that I’ve read and where I was is I remember that,” said Paul. “That is because, unlike any other art form, reading is truly interactive in the real deep sense of the world… You’re telling the story when you read a book as much as the author is telling a story, and I think that, for me, is why the power of books is stronger than all those other art forms and won’t go away.”

Raising the topic of Amazon, Teicher asked Paul to give her perspective on the online retail behemoth.

“In talking about the business of books, it would be difficult not to ask you about Amazon,” he said. “Their size, their influence, not just in our business but overall in the American economy, is pretty significant. What do you think about it? What’s your view?”

Paul explained that the Times approaches its coverage of Amazon impartially but rigorously.

Turning to the topic of favorite bookstores, Paul said she likes to frequent bookstores when she travels because she has the free time then to enjoy browsing the shelves.

“Every year, I go to Vermont and I go to Northshire Bookstore. I love that store, and my kids love that store and think of it as their store,” she said.

During an 11-day trip to South Dakota, Mitzi’s Books in Rapid City became a frequent stop for her children, who are voracious readers and who needed to replenish their book supplies more than once.

Paul, who also hosts the weekly podcast Inside the New York Times Book Review, said she generally talks about books she’s reading for pleasure on the podcast because one of the ground rules is no talking about books before they come out, which eliminates most titles she reads for work.

Given her busy schedule, Paul said it can take a while to get through certain books. “It puts a lot of pressure on us to be constantly reading something new,” she said, adding, “I read a lot of backlist, to be honest. The best book I read last year by far was Wilkie Collins’ The Woman in White, which a lot of you already read long ago. And I did buy it in a local bookstore in Larchmont in Westchester.”