Traffic driven to a store’s website from social media can translate into two types of conversions — sales and subscriptions, said Davies, and for stores that focus on leveraging social media to meet their marketing goals, online sales can be used as a rubric for their progress. To formulate strategies, it’s helpful for booksellers to know where their website traffic is coming from, he added, and Google Analytics provides tools that allow stores to see which social media sites are driving these conversions.

Last year, a successful social media campaign for D. Randall Blythe, lead singer of the metal band Lamb of God, led to high book sales and high event ticket sales at Fountain Bookstore. The success of the campaign was due in part to Blythe’s directions to his many social media followers to buy his autobiography, Dark Days (Da Capo Press), specifically at Fountain, said Justice, who noted that some publishers will not let their authors link to a specific store.

“We always leverage the social media platform of the author we’re working with, rather than trying to force people to look at Fountain Bookstore,” said Justice. “We try to get them as customers later, and we frequently do.”

At Book Soup, Graham works with a team of two staff members to promote the store’s social media campaigns. “We’ll plan an event several months out and get it up on the store website as soon as we can,” he said. “After we do that, we’ll create an event on the store’s events page on Facebook. Then we link back to our website event page from there.” 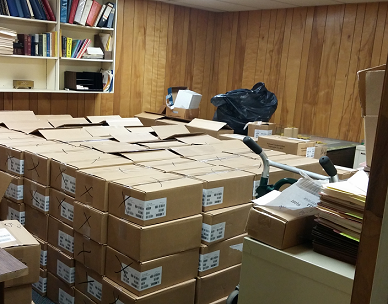 A portion of the boxes of books pre-ordered as a result of a social media push by author Maggie Stiefvater.

Book Soup also monitors Twitter for authors who are promoting their own events. “The authors we get the best return on are the ones who are very active on Twitter and who are doing the work and pushing people to us,” said Graham. “We’re doing what we can on our end and we may have a lot of followers, but that doesn’t mean they see every tweet we send. The authors who are very active and social media savvy are driving our sales.”

As an example, Graham cited author Bruce Cameron, who contacted Book Soup about doing a signing at the store for the movie tie-in edition of A Dog’s Purpose. After Cameron promised he would e-mail his list of social media followers about the event, Book Soup did its part by setting up a webpage detailing what customers would be getting when they ordered the book from the store and when Cameron would be in to sign the books.

“We pushed on our own social media, but he did most of the labor himself, and it was a very successful campaign,” said Graham.

To authors who aren’t comfortable dealing with logistics, Fountain Bookstore offers the store’s services to promote a book or event, take pre-orders, and ship books.

“We offer them our services and they love it,” Justice said. “This generates massive sales because their social media platforms are so much larger than Fountain Bookstore’s. If you create a relationship with literally every author that you work with and say ‘I can provide this service for you; I can mail your books to customers all over the world,’ that is very appealing to your partners.”

As an example, Justice pointed to a social media push by Maggie Stiefvater for online sales and pre-orders of The Raven King, the final book in the Raven Cycle series. The response to Stiefvater’s outreach was so great that the store needed to rent warehouse space to hold all of its pre-orders.

Fountain Bookstore often makes the most of the shipping process to gain even more social media followers by including a special marketing message in the package; this message will usually include an incitement to the customer to post a picture of himself or herself with the book on social media and tag the store, Justice said.

Another helpful tool for leveraging traffic from social media to gain e-mail subscriptions and more followers is a pop-up window, also known as an interstitial, said Davies, adding that pop-ups have been shown to increase subscription rates by 50 to 100 percent. Davies recommended Mailmunch, a free service that allows e-commerce websites to custom-design pop-up windows and customers to designate the time between pop-ups. Justice and Graham both agreed that using pop-ups can be helpful in gaining new e-mail subscribers.

Davies emphasized the importance of getting social media followers to visit the store website. “Facebook has an algorithm that says how many times someone has seen your page, and these algorithms are changing all the time,” he said. “[Facebook is] controlling that customer for you, so you want to do whatever you can to get that customer from Facebook to something that you control,” i.e., your store’s website.

Booksellers were also warned about trusting social media platforms, including Facebook and Twitter, to archive and save content that stores want to keep, as the platforms, not the store, actually own their pages. In March, after the Winter Institute, BookBeat, an independent bookstore in Oak Park, Michigan, ran into that very problem when Facebook removed its account without warning over a copyright claim that turned out to be unfounded. The problem was resolved within a day and none of the store’s past content was lost, but another case might turn out differently.

To succeed in capturing social media traffic, Cusick advised booksellers to include links in posts that direct social audiences back to the landing pages on their own websites as often as possible, rather than focusing solely on amassing followers.

“Each social platform is designed to keep users on it as much as possible: to keep you in the world of Facebook,” said Cusick. “The aim with online sales is not to encourage customers to stay on Facebook or end the interaction with a Facebook RSVP, but to point them back to your own website. Include links to a relevant product page, an author landing page, or event page with a linked event ticket product.”

According to Justice, one important way to do that is to make sure visiting your store’s website is a good experience. The site should be accessible and aesthetically appealing both on desktop and mobile devices, she said, adding, “If you’re going to be driving all of this traffic to your site, make sure it is clean, easy to use, and up to date.”

Over the years, Justice has honed her store’s method of conducting social media campaigns through trial and error. Now, to help booksellers navigate this process and avoid her past mistakes, she has created an exhaustive step-by-step guide for booksellers, starting six months out from a planned event. Read Justice’s comprehensive social media guide here.