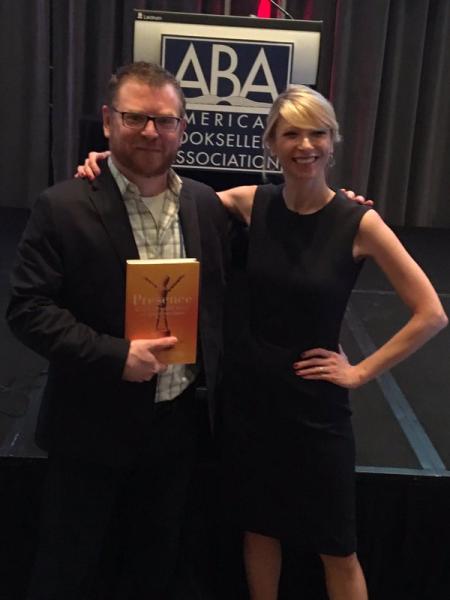 Cuddy’s talk on the second morning of the Winter Institute in Denver expanded on ideas from her new book, Presence: Bringing Your Boldest Self to Your Biggest Challenges (Little, Brown). In Presence, Cuddy uses social psychology research to empirically show how strong posture and “power” poses can positively affect one’s feelings and behavior. Cuddy also relayed these ideas in the 2012 TED talk “Your Body Language Shapes Who You Are,” which at 30 million views is now the second most-viewed TED talk of all time.

At the breakfast, Cuddy asked booksellers to think of what their biggest challenge is — a situation they tend to approach with a sense of fear, execute with anxiety and distraction, and leave with a sense of regret.

The key to presence — the ability to act as one’s authentic self as events unfold without worrying about the past, considering the impression one is making on others, or extrapolating into the future — is unlocking the personal power you already possess, said Cuddy. Social power is power over others, she said, but “personal power is power over the self and the ability to bring those things forth. Power leads to presence.”

To explain how “present” people are able to access this personal power, Cuddy cited a number of social psychology experiments. In one, researchers gave a mock job interview in which the interviewer created a situation of stress by presenting a completely neutral, nonreactive face to the interviewee. The researchers found that those interviewees who performed best displayed the quality of presence through a number of qualities and behaviors: they believed their own narrative; they displayed confidence without arrogance; and their verbal and nonverbal behaviors were in alignment.

“When we feel powerful, it activates what psychologists call the approach system,” Cuddy said: The reaction stimulated in the brain causes the person to see a challenge as an opportunity rather than a threat; to feel more confident; and to approach the situation more optimistically rather than avoiding it. People who are feeling powerful are also more likely to persist at difficult tasks; think more clearly, creatively, and quickly; and present a more authentic version of themselves.

Feelings of powerlessness, on the other hand, do the opposite, activating the brain’s latent inhibition system, which causes people to think more slowly and react to challenges with fear and negativity.

Cuddy argued that practicing power poses by oneself — putting hands on hips in what she calls the “Wonder Woman” pose, or standing with arms raised high in victory — allows the body to convince the mind that one has power, thus conferring these positive psychological benefits.

In her talk, Cuddy also explained how feelings of powerfulness are actually connected to real changes that happen in the body: the level of testosterone, the hormone that promotes assertiveness, a desire to compete, confidence, and increased risk tolerance has been seen to increase when someone experiences a positive outcome, like getting a yes for a date, whereas something like losing a sports game will cause an increase in the body’s level of cortisol, which causes people to feel higher levels of stress and anxiety and act threatened and defensive.

“People have control over their hormone levels. Things that happen to us in the social world change these levels,” Cuddy said. Practicing power posing can have this same effect, optimizing the brain to do well in challenging situations and actually changing hormone levels. In one study that Cuddy noted, subjects who stood in a power pose for just two minutes performed better on a test they were given later.

To further demonstrate the power of the vital connection between body and mind, Cuddy talked about the haka, a Maori ritual dance meant to demonstrate pride and confer strength on the performer. The New Zealand rugby team the All Blacks, which has won the last two rugby world cups, does the dance, which involves body movements to make the self appear bigger, before every game. Doing the haka before games has served to increase the players’ ability to do well and be present, something reflected in their winning record.

On the other hand, Cuddy said postures that contract or slouch the body can typically be seen in clinical depression patients; this is also the same form people’s bodies usually take when they hunch over their smartphones. To combat the negative psychological impacts of lapsing into such postures, Cuddy advised the audience to practice power poses in private, present themselves with good open posture in public, and to be aware of their posture throughout the day.

“Body language is not just speaking to other people. It is also speaking to you. Your body is constantly having a conversation with your mind and you can control the content of that conversation, it’s just generally not something that you think to do,” said Cuddy. “I originally thought of this as faking it till you make it — just getting through a tough situation and then you’re done. I now see that as people do this they slowly over time become their best selves — they become the self that they imagine themselves to be.”

At the session’s conclusion, booksellers took Cuddy’s advice to heart, rising with their arms held high in the victory pose. Cuddy ended her speech with this encouraging quote from Maya Angelou: “Stand up straight and realize who are you are, that you tower over your circumstances.”